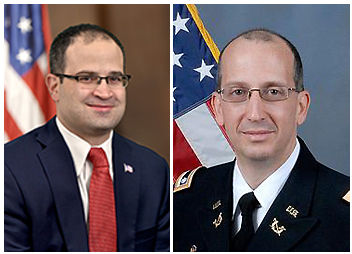 State Assemblyman Edward Ra, a Republican who is running for re-election in the 19th District, said he’s focusing his campaign on education, the economy and ethics.

But Gary Port, a Democrat running against Ra for the third election in a row, said Ra lied and isn’t fighting for ethics change and that his political career is based on patronage and nepotism.

“He can say whatever he wants, but at the end of the day, he took the job,” Port said referring to one of Ra’s  first jobs working for his father, Joseph Ra, the Town of Hempstead attorney. “This guy doesn’t have any honesty in him when it comes to government, integrity, patronage, nepotism. All this stuff, all these issues is mother’s milk to him. He grew up in this.”

Ra, a resident of Franklin Square, who has held a seat in the Assembly since 2010, said:  “I was elected in a tough Assembly district and won and was re-elected on my own merit. I will put my work ethic up against anyone else on behalf of my district.”

With a strong Republican tally of 37,215 registered voters in the 19th Assembly District, Ra holds an advantage over Port, with the district having 28,066 registered Democrats. The district covers parts of the Town of Hempstead, the Town of North Hempstead and the Town of Oyster Bay.

Addressing ethics, Ra said there needs to be an internal evaluation of the Legislature that ultimately leads to the stripping of leaders’ absolute power.

Ra said there should be term limits, but he’s not sure what the number of terms someone can serve should be.

Port, a divorce lawyer from West Hempstead, said Assembly members should be limited to four or five terms, and the election cycle should be changed from every two years to four years to eliminate corruption created by the allocation of money in short terms.

“We should also increase the number of voting days, because right now in this county, the voting day skews toward Republicans,” Port said.

Port said the project is a good idea in theory and would be the best way to reduce highway traffic on Long Island, but wants to see a structural report on how it will affect areas and buildings near the construction.

“You can’t expand highways or make them into double-decker highways,” Port said. “People wouldn’t be in favor of that. I support the concept, I just need more answers.”

Port said there are indications that the project will  increase freight transportation, too, which he isn’t opposed to, but believes the communities should know about.

Ra said the project hasn’t been justified, and in it’s current form, favors people outside of the communities the building will affect.

“I’m not saying there’s no positive benefit,” Ra said. “There just has to be a level of balance, and the benefit is going elsewhere from the people who are going to be most directly affected by it.’’

As an alternative, Ra said he wants to see improvements made to the existing lines.

He noted the possibility of double-decker train cars, which some lines currently use and alleviating delays by fixing signal and switch problems.

“People call my office everyday to see how the project is going to work and affect their local street,” Ra said.

Both Ra and Port cited problems in Long Island schools, especially how teachers are evaluated in the current Common Core system.

Ra, the ranking minority member of the Education Committee, said the current system makes it harder to get rid of bad teachers, because instead of dismissing them, schools put them on an improvement plan.

“I would like to see the use of portfolio assessments and more research,” Ra said. “I’d bring in researchers, administrators, parents. I would bring in people that have some view on the inside of things and try to structure something.”

Port said he would work to limit the power of book publishers who drive the system and have too much say over the curriculum.

In the 19th Assembly District, and throughout the state, the amount of money school districts receive per pupil varies, and Port and Ra said there needs to be a solution to equalize the spending.

Not only does the money need to be equalized, Port said, school districts need to spend it more efficiently.

Ra said school districts need to be evaluated and a path to evenly distribute funding needs to be discovered.

Port said his 28 years as an officer in the Army Reserves and his experience in law qualifies him for office, because it shows he can identify and solve problems.

Ra said he’s relying on his existing relationships with the community and school members, while mentioning his work to expedite studies to evaluate the amount of airplane noise heard in communities as one of his biggest accomplishments.

With the possibility of a vote to overturn the state’s abortion law, Port said he doesn’t like abortion, but it’s the “lesser of two evils.”

“I personally don’t like it,” Port said. “But my main concern is with parental notification.”

Ra said he is “pro-life” and “the state of the law is what it is and I don’t anticipate it changing.”

Port said the drop in votes from 2012 to 2014 was a result of Democrats only coming out to vote in years with presidential elections.