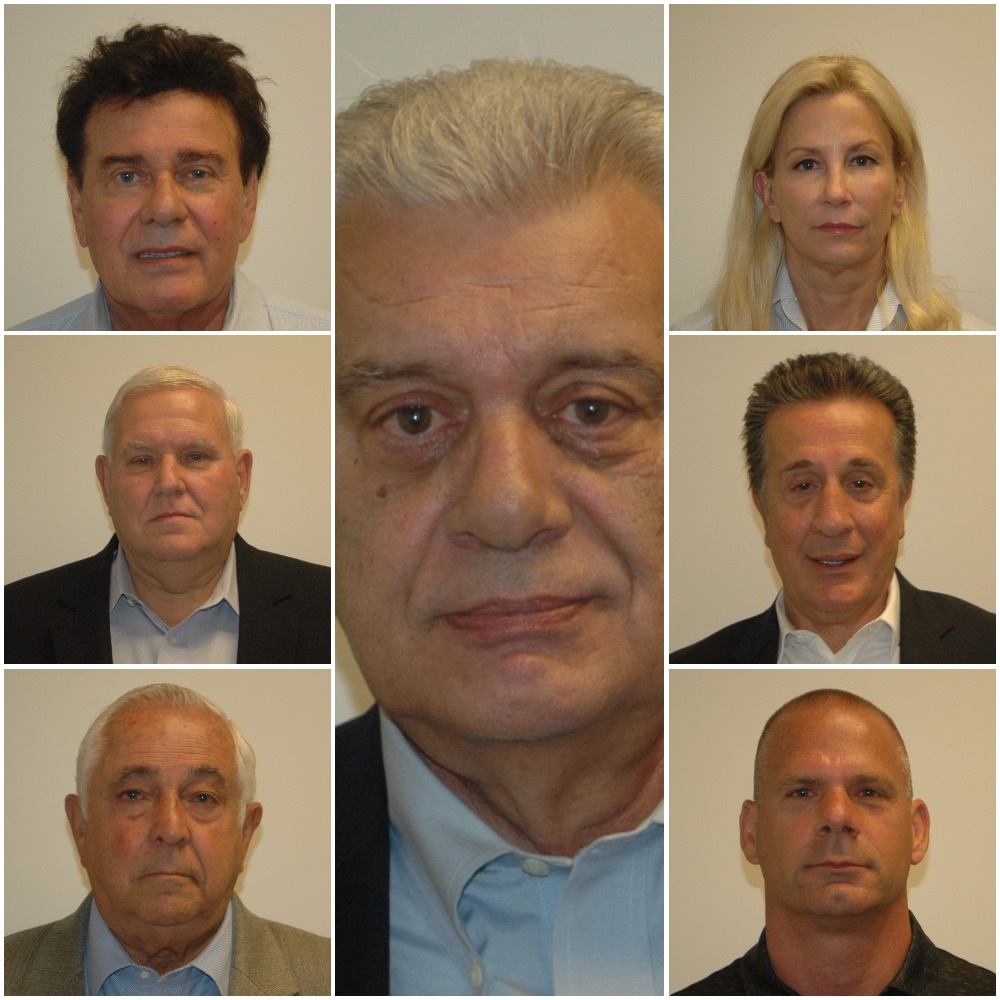 Seven people were arraigned Thursday on 220 charges stemming from what the Nassau County district attorney called a “shocking and interconnected web of public corruption” in the Town of Oyster Bay.

They allege the illegal hiring and firing of a town staffer, the repaving of a friend’s sidewalk as a favor and a multimillion-dollar bribery scheme involving a proposed $150 million senior housing development in Hicksville.

The contractor, the paving company Carlo Lizza & Sons, also faces more than 20 charges. A grand jury also indicted Frederick Ippolito — who was allegedly the mastermind of the schemes — before his death in federal prison this month, District Attorney Madeline Singas said.

Elia “Aly” Lizza, the CEO of Carlo Lizza & Sons, and his wife, Marisa Lizza, were hit with the heftiest charges: 19 counts of felony bribery, 18 counts of rewarding official misconduct, two counts of defrauding the government and one count of fifth-degree conspiracy.

“Our investigation uncovered a culture of government corruption that we allege benefitted those in power, their friends and family at the expense of Oyster Bay taxpayers,” Singas said at a news conference after the arraignments.

All seven people and the paving company pleaded not guilty in court before Judge Charles Wood, who came from Westchester County to oversee the case to avoid the appearance of any conflicts of interest with sitting Nassau judges, Singas said.

Carlo Lizza & Sons received nearly $13 million in Nassau County contracts in 2016, and received millions more in prior years, according to records posted online by the county comptroller’s office. The company has not received any business so far this year.

The charges were the culmination of a 14-month investigation by the district attorney’s office that included court-authorized wiretaps, interviews and extensive reviews of documents, Singas said.

“The people are ready for trial,” Aviram said.

The seven people were led into the Mineola courtroom in handcuffs. Wood released them without bail but restricted their travel outside New York State and ordered all who had passports to surrender them.

Nocerino was allowed to keep his passport until he returns from a pre-planned trip to Europe that starts next week.

Attorneys for some of the defendants noted that they had not tried to flee even though they’d been aware of the investigation for months or years.

“He has shown faith and trust in cooperating with the people,” Joseph Ferri, Cecere’s attorney, said of his client.

Depending on the charges against them, each person faces one to 15 years in prison if convicted on the most serious charge.

Thursday’s indictments follow the October arrests of Venditto, along with Nassau County Executive Edward Mangano and his wife, Linda Mangano, on federal corruption charges in connection with a bribery and kickback scheme involving a restaurateur.

All three have pleaded not guilty. Venditto resigned in January to focus on his criminal defense, but Mangano has refused to step down and is reportedly weighing a re-election campaign.

Ippolito, whom Singas described as a longtime “power broker” in GOP-controlled Oyster Bay, was sentenced last year to 27 months in federal prison after pleading guilty to tax evasion charges. He died in prison on June 4.

The indictments allege that Ippolito took bribes for actions that favored the Lizzas and continued to influence the town government even after he was removed from office.

The Lizzas allegedly paid Ippolito — who worked as their private consultant before taking his town post in 2009 — from their personal bank account after taking the money from their company’s account, Singas said.

The Cantiague Commons plan required the asphalt plant on John Street to be rezoned for residential use. The Town Board approved the rezoning in December 2012 at Venditto’s and Ippolito’s urging, according to the indictment.

Venditto also agreed to have the town purchase a nearby Lizza-owned site on Engel Street for $2.5 million in 2013, even after the Lizzas offered to donate it to facilitate the Cantiague Commons project, Singas said.

The site was contaminated when the town bought it, with two underground oil tanks leaking into the soil, Singas said. But under the conditions of the sale, the previous owner was only liable for $100,000 of the estimated $1.3 million cleanup, the indictment says.

That part-time employee was the son of Ippolito’s love interest, who was hired at twice the normal salary as a favor to her while the cash-strapped town was considering layoffs, Singas said. Ippolito ordered him fired when his relationship with the woman soured, Singas said.

Porcelli, Venditto and Frank Nocerino, the former town parks commissioner, allegedly had two other employees fired at the same time to cover up the favor to Ippolito. In a wiretapped phone call, Ippolito told Porcelli to “pick five s— heads and … let ’em go,” the indictment says.

The third indictment alleges that Antetomaso had Cecere fix a friend’s sidewalk in August 2016 on Oyster Bay’s dime, even though the town had just ended a program that paid for residents’ sidewalk repairs.

Cecere allegedly acknowledged that the program ended, but agreed to do the repairs as a favor anyway, the indictment says.

Singas, a Democrat who pledged to fight public corruption in her 2015 election campaign, said this corruption case is among the worst she’s ever seen.

“The victims here are the honest taxpayers who work had and play by the rules to live in the beautiful Town of Oyster Bay,” she said.

Gov. Cuomo declares state of emergency for MTA
Next Article