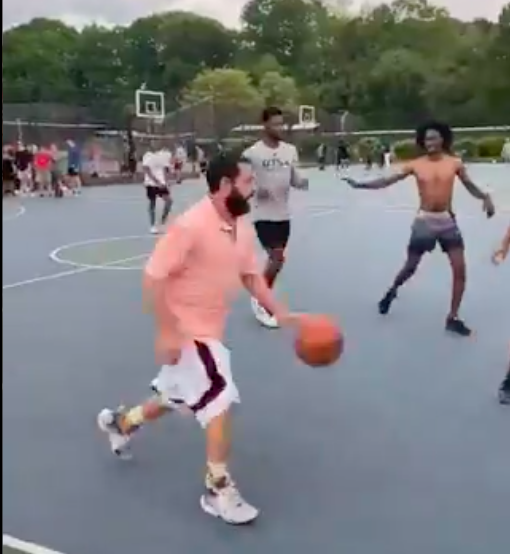 Comedian Adam Sandler, in orange, dribbles during a pickup basketball game with locals at Christopher Morley Park in Roslyn. (Screencap via Instagram, @RoboBball3)

Comedy icon Adam Sandler appears to be enjoying his time on the North Shore, as evidenced by a recent sighting at a park in Roslyn.

YouTuber and engineer Robert Whitehorn of Huntington, whose Instagram handle is @RoboBball3, posted 44 seconds of footage to  Instagram on Sunday showing Sandler, clad in a pink T-shirt, playing a pickup basketball game at Christopher Morley Park in Roslyn.

Sandler, who Newsday reports is shooting a movie for Netflix at Grumman Studios in Bethpage, was playing on one side of the half-court at Morley, Whitehorn told Newsday.

“He walked in very low-key, and one of the people I was playing with said, ‘That’s Adam Sandler on the other end of the court,'” Whitehorn said. “I noticed the pink polo shirt with the baggy shorts and I wasn’t sure it was him, but he turned his head and I saw his face and I knew immediately.”

Whitehorn told “Inside Edition” on Tuesday that he is hoping to use the viral interest to convince Sandler to appear in a charity basketball game.

“Mr. Sandler, if you’re even seeing this, so many people pulled up around the park to see you, so I think it would be awesome if you had any free time at all to do a charity basketball game on Long Island,” Whitehorn said. “I would love to help him put that together because he obviously has done a lot of charity, [and] I’ll take care of it. Just let me know. If you would ever want to do that, I’m here for it.”

The sighting came less than a month after Sandler unintentionally starred in another viral video on the North Shore, in which a Manhasset IHOP hostess lamented over TikTok that she didn’t recognize him when he came into the Northern Boulevard restaurant with his daughter and left after she told him it would a 30-minute wait.

Sandler later joked on Twitter that he had left because the restaurant’s unlimited pancakes promotion did not apply to milkshakes, which the chain rectified in a special nationwide Milkshake Monday promotion that resulted in Sandler reuniting with the hostess at the Manhasset IHOP.

The Brooklyn-born Sandler has shown off his basketball skills on the island before, including a game in Morley Park in June 2017, with one of his fellow players describing him to Newsday as a “well-rounded” player with a “high basketball IQ.”

In June 2019, Sandler stopped by Hofstra University’s gym in Hempstead with friend and frequent co-star Rob Schneider to shoot hoops with students before a show at Northwell Health at Jones Beach Theater. 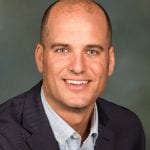 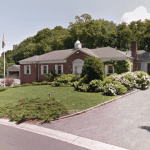