“Antiques Roadshow,” one of the longest-running programs on PBS, is coming to the Sands Point Preserve.

The beloved appraisal show will be filming at the preserve’s 50,000-square-foot Hempstead House on Sept. 14 — and the producers are looking for collectors who want to put their treasured artifacts on camera.

The program has launched the Antiques Roadshow 2021 Appraisal Contest to find locals willing to have their antiques appraised when the production shoots in Sands Point for its 26th season, which is scheduled to air on PBS in 2022.

Entrants have until June 7 to submit a short description of their item and how they came to own it, any known story or background information about their item, and two or three digital photos of the item.

Producers will contact entrants prior to filming in September. Interested people can enter the contest at pbs.org/wgbh/roadshow/tickets/apply/. A maximum of two entries are permitted.

Marsha Bemko, who serves as executive producer of the “Antiques Roadshow,” said in a phone interview that the property satisfied several “practical considerations” that the program seeks in its filming sites, including having the size to accommodate the production during the COVID era, and having a rich history itself.

“It’s really nice to have a place that’s rich in history, that people are interested in how this came to be and what is it today, and we can tell that story,” Bemko said. “And so that all combined led up to a perfect location for us.”

Hempstead House was built in 1902 by financier Howard Gould, following his wife’s disapproval with the 100,000-square-foot Castle Gould on the same property. Following their divorce, in 1917 Gould sold the estate in 1917 to mining tycoon Daniel Guggenheim, whose family built several other houses on the property.

After Guggenheim’s death, his widow, Florence, auctioned off the house’s furnishings, and during World War II she allowed 75 British refugee children to live in Hempstead House while foster homes were organized for them.

Florence Guggenheim would later donate 162 acres of the estate, including Hempstead House and Castle Gould, to the Institute of Aeronautical Sciences in 1942, resulting in their use as offices and laboratories.

Once naval operations moved to Florida in 1967, the land was declared government surplus, but in 1971 Nassau County acquired 127 of the acres for public recreational use. With the remaining 90 acres deeded to the county after Florence’s son Harry died, the estate was restored and rechristened the Sands Point Preserve.

The estate is now overseen by the Sands Point Preserve Conservancy and is a frequent filming location for TV and movies.

Executive producer Bemko adds that since the program couldn’t film because of the pandemic last year, she and the rest of the crew are “starving” for unique stories.

“We didn’t get to tour last year right,” Bemko said. “We’re tour junkies, we’ve toured every year except for the last one. For everyone who is submitting stories now, it doesn’t need to be great stuff. It just needs to have a great story.”

Other locations where “Antiques Roadshow” is slated to film include Wadsworth Mansion in Middletown, Connecticut on Aug. 10, the Omni Mount Washington Hotel in Bretton Woods, New Hampshire on Sept. 1; an unspecified location in Colonial Williamsburg in Virginia on Sept. 28; and Grounds for Sculpture in Hamilton, New Jersey on Oct. 6.

Readers Write: No political leader should head the Holocaust Memorial and Tolerance Center of Nassau County
Next Article 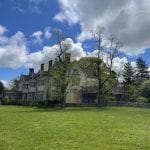