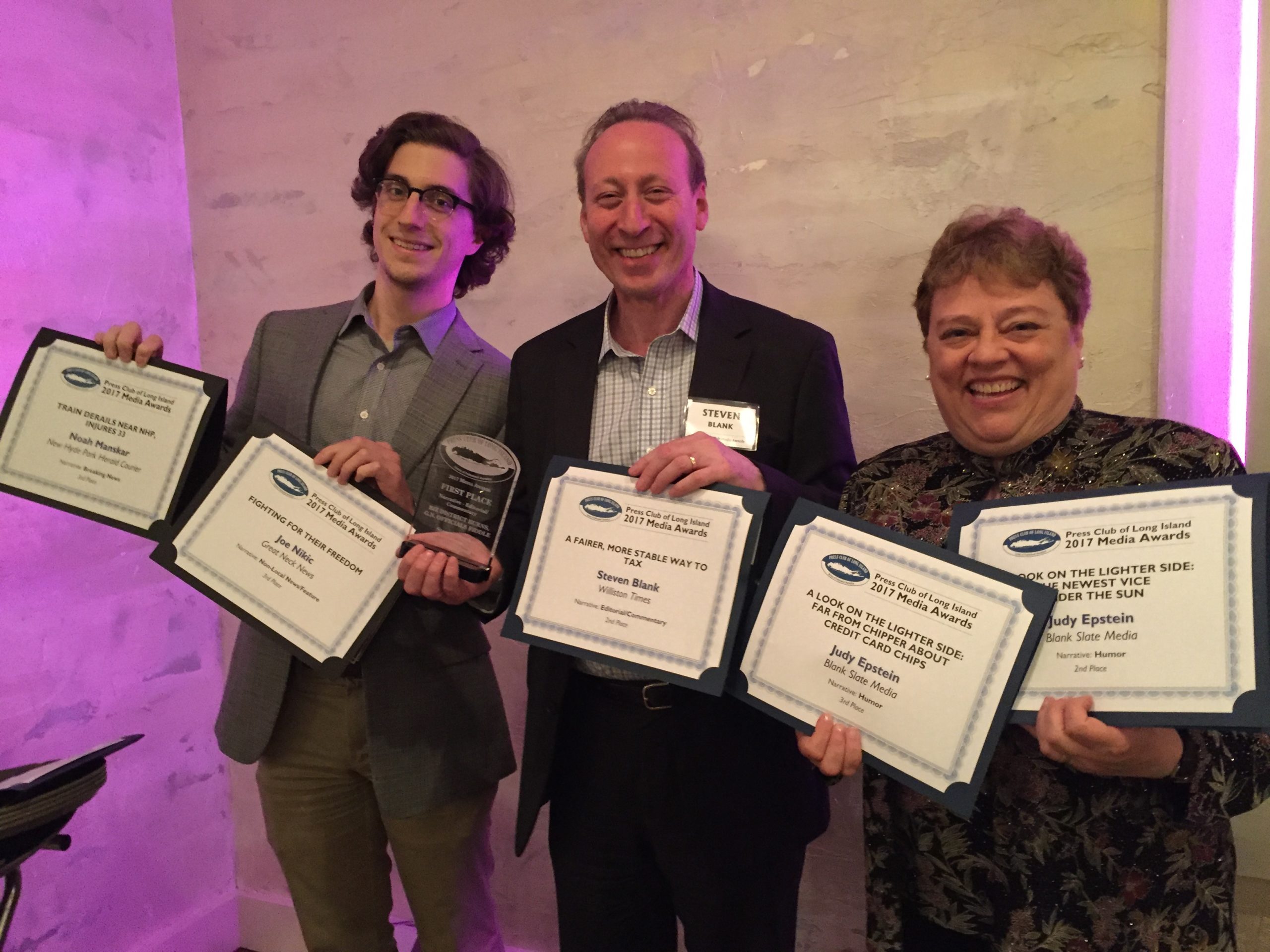 Blank, a former daily newspaper reporter at the Daily Record, the Post-Standard and the Kansas City Star, also won second place in the category for an October 2016 editorial “A fairer, more stable way to tax,” about fees being added to traffic tickets.

“I am very appreciative of the recognition that our staff has received from our peers in the Press Club of Long Island,” Blank said. “I think it’s a real honor because we were competing not only with other weekly newspapers on Long Island but with Newsday and other daily papers, and I think that the awards further validate the judges in the New York Press Association where we received 10 awards.”

Blank, who said he has not entered a journalism contest since the 1980s, said “I forgot how fun it is when you win.”

Columnist Judy Epstein won second and third place in the Humor category for two of her “Take a look on the lighter side” columns.

Her second place win was for a March 2016 column “The newest vice under the sun,” which was a humorous take on the medical dangers of sitting too much.

“Far from chipper about credit card chips,” Epstein’s third place win, chronicled the annoyances people endure when attempting to pay with a credit card, having to figure out which way to swipe or if to insert the card into a chip reader.

The column was about Nassau County’s fiscal surplus being a result of $123 million of operating expenses being paid for with borrowed money.

“Our opinion pages excelled with us winning three awards for column writing and two for editorials, but I only wish that one of these contests recognized the quality of contributors from the many letter writers we hear from each week,” Blank said.

Reporter Joe Nikic won third place in the Non-Local News/Feature category for his narrative take on a Russell Garden’s couple who traveled to Greece to volunteer at a refugee camp.

Clausen, a reporter, won third place in Feature Photograph for her work at the Amityville Record.

Bodkin, who draws cartoons for the Blank Slate papers’ opinion page, won first place for a cartoon he drew for Newsday called “Text 911.”

Glader won second place in the Non-Local News/Feature category for his article, “How some Greek olive farmers are making more money selling less oil,” which he wrote for Forbes.com.

The Press Club of Long Island, a chapter of the Society of Professional Journalist, also inducted three Long Island journalists into its Hall of Fame, including Jimmy Breslin, the legendary Pulitzer Prize-winning tabloid columnist known for his muckraking and tendency to tell stories that no other reporters were writing, who died in March.

Helen Rattray and Carl Corry were inducted into the Hall of Fame too.

Try something exotic at your next barbecue
Next Article