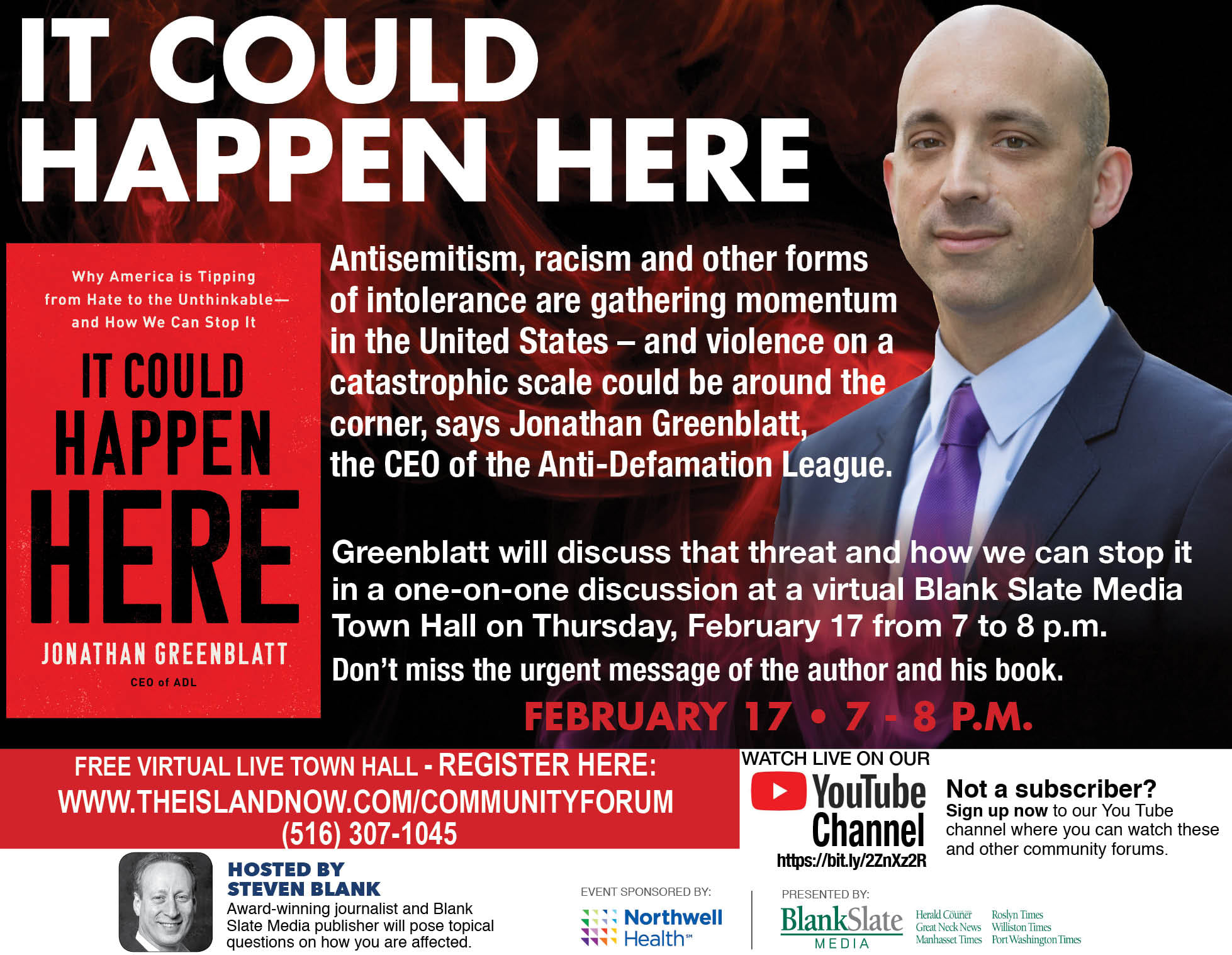 Blank Slate Media will host a virtual interview with Jonathan Greenblatt, the CEO of the Anti-Defamation League, with a discussion centering on the threats of antisemitism, racism and other forms of intolerance.

Greenblatt, who became CEO of the world’s leading anti-hate organization in 2015, has spearheaded efforts to modernize the group’s efforts and resources. Some efforts include rebooting the league’s Center on Extremism and developing the Center for Technology and Society in Silicon Valley.

He also wrote a recently published book, “It Could Happen Here: Why America Is Tipping from Hate to the Unthinkable – and How We Can Stop It.”

Greenblatt, whose wife is an Iranian refugee with deep roots to her home country, told NPR that some Americans could face the fate of his wife and his grandfather, a Jew from Germany, and be forced to leave the nation if these acts of hatred are not properly combated.

“It can happen here if we don’t literally, with our own hands, choose to stop this before it comes to pass,” he said.

The ADL, Greenblatt said, has been tracking antisemitic trends and instances for roughly 60 years, with antisemitic attitudes being held now by  8 to 10% of the American population.  Despite the fact that millions of people still have those mindsets, he said, the statistics provide some encouragement.

“I have great optimism and hope, but the frightening thing is that we’ve watched antisemitic incidents explode,” he said. “They’re almost double what they were just five or six years ago.”

Blank Slate Media Editor and Publisher Steven Blank touted Greenblatt’s work as the CEO for the Anti-Defamation League and noted that Nassau County and some areas on the North Shore have  witnessed acts of intolerance and hatred toward specific groups of people.

“We are honored to have Jonathan Greenblatt, CEO of the Anti-Defamation League, as our guest at a town hall on the rise of antisemitism, racism and other forms of intolerance and the threat it poses for widespread violence,” Blank said. “We have seen those signs of intolerance and its potential for violence in Nassau County and across the United States. Jonathan and his organization have studied this problem as much as any organization and there is no better source of information of how to combat hate in America at this very critical time.”

The North Shore has seen a fair share of antisemitic and anti-Asian instances and subsequent demonstrations condemning those actions over the past two years, including a hijacking of a torah study event held via Zoom, vandalism on a local high school’s website and swastikas spray-painted on the outer walls of various structures.

State Sen. Anna Kaplan (D-North Hills) also promoted legislation for the state Senate to conduct a study on courses of study on the Holocaust in New York’s schools in April.

Kaplan said that a recent study by the nonprofit Conference on Jewish Material Claims Against Germany revealed that 58% of New Yorkers aged 18 to 39 cannot name a single concentration camp, that 19% believe that Jews caused the Holocaust and that 28% believe the Holocaust is a myth or has been exaggerated. In each of these three metrics, New York had the worst score of any state in the country.

Those interested in joining the virtual event on Feb. 17 at 7 p.m. can register online at theislandnow.com.

Readers Write: Port schools should be the best in Nassau