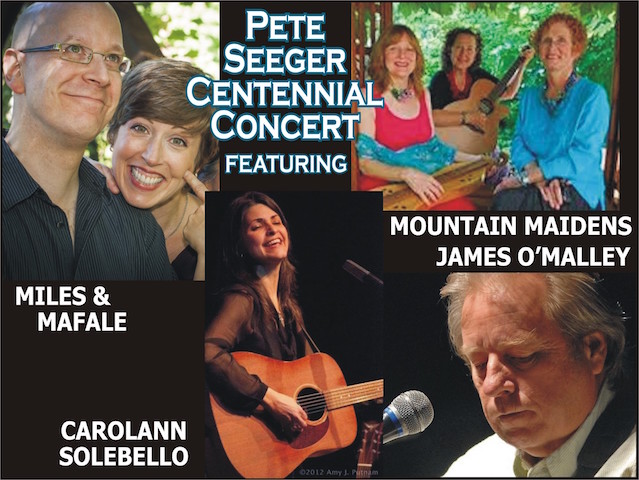 Pete Seeger, the American folksinger, political activist, environmentalist and humanitarian whose songs provided a musical backdrop for many of the historical movements of the 1960s through the early 2000s, would have turned 100 on May 3.

“Although Pete left us in January 2014 at the age of 94, his spirit and his songs — both those he wrote and those he helped to popularize — live on,” said Michael Kornfeld, board president of the Folk Music Society of Huntington, the host of a Seeger centennial concert taking place on Saturday, May 4 at 8:30 p.m.

As Bruce Springsteen once said, Seeger lived a life that is “a testament to the power of song and culture to nudge history along.” He was the essence of humanity, a man who dedicated much of his life to helping others, lifting people up through song and his indomitable spirit, and bettering the human condition and that of our country and planet.

“Pete Seeger may be gone now, but we at the Folk Music Society of Huntington hope that his legacy, his songs and his challenge to us to employ the power of song to help change the world will live on for generations to come,” said Kornfeld.

To mark the centennial of his birth, the nonprofit organization, now in its 51st year, has invited talented Long Island and New York City-based artists to perform some of Seeger’s songs, along with a few of their own. In the spirit of Seeger, audience members who know the lyrics are encouraged to join in. Singing along is part of the folk tradition.

Featuring the artists Miles & Mafale, Carolann Solebello, James O’Malley, and the Mountain Maidens, the concert will take place at the Congregational Church of Huntington, 30 Washington Drive, off Route 25A, in Centerport, and be preceded by an open mic at 7:30 p.m.

Catherine Miles and Jay Mafale, formerly The YaYas, are three-time finalists in the prestigious Kerrville New Folk Competition, were audience-voted “most wanted” artists at the Falcon Ridge Folk Festival, and have had official juried showcases at several music conferences hosted by regional affiliates of Folk Alliance International. The Long Island-based husband and wife team’s music turns toward more socio-political themes.

Solebello is a New York City-born and bred performing songwriter whose smooth, compelling voice and warm acoustic guitar style nod to rural folk traditions, with a decidedly urban sense of rhythm and sophisticated vocal phrasing that bend those traditional forms into more contemporary shapes. A founding member of the popular Americana trio Red Molly, with whom she was associated for six years, she now tours as both a solo artist and with the modern folk quartet No Fuss and Feathers.

O’Malley has been a mainstay on the Long Island folk scene for many years. He writes knowingly of life’s foibles, triumphs and defeats, and delivers his songs in a gentle, subtle, whispering tenor that draws his listeners in. A two-time finalist in the Plowshares Songwriting Contest, O’Malley writes songs that take listeners on emotional journeys.

Tickets to the show, priced at $25 ($20 for FMSH members), may be purchased in advance at www.fmsh.org using a credit card or at the door with cash and checks only. For more information about the concert, visit the website or call 631-425-2925.