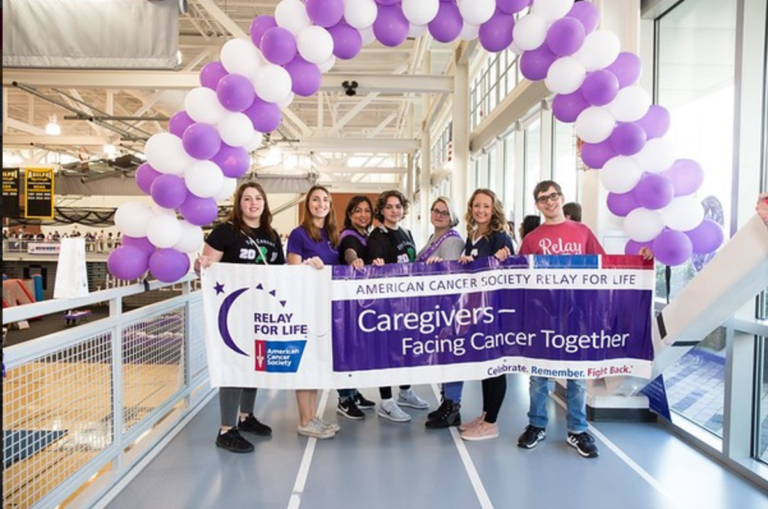 The Adelphi University community is taking action this April with three nationally connected events aimed at creating and inspiring change. Students, faculty, staff, alumni and others will come together to raise funds for cancer research and bring awareness to important issues such as voter suppression and sexual assault.

Benefiting the American Cancer Society, Adelphi will hold its annual Relay for Life event on Friday, April 5, in the Center for Recreation and Sports from 3 p.m. to 3 a.m. the next morning.

Relay’s objective is to raise funds for cancer research and cancer patients, as well as increase cancer awareness, celebrate the lives of survivors, remember those who lost their lives and unite as a community in the fight against the disease. The event will include fundraising games, food, raffle prizes, performances and activities as well as powerful speeches from cancer survivors and caregivers

“Relay For Life continues to be an important and successful fundraising event for the American Cancer Society,” said Arianna Livreri, assistant director of Adelphi’s Center for Student Involvement. “It represents the hope that those lost to cancer will never be forgotten, that those who face cancer will be supported and that one day cancer will be eliminated.”

New this year, Adelphi will join impassioned women around the country in presenting a reading of the famed courtroom drama, “12 Angry Men,” featuring an all-female and non-binary cast on Saturday, April 6, to encourage voter registration. Adelphi administrators, faculty, staff, students and alumni will be participating in the reading.

12 Angry Men follows a 12-person jury on a murder trial tasked with deciding the fate of an inner-city teen accused in the stabbing death of his father, where a guilty verdict means an automatic death sentence. The story was written in 1954, 19 years before women were permitted to serve on juries in all 50 states.

The goal of the event is to inspire 1,000 other theatres across the country to do similar readings of “12 Angry Men” as a way to bring awareness to voter suppression and encourage voter registration before the primary elections.

The reading will begin at 5 p.m. in Adelphi’s Olmsted Theatre in the Performing Arts Center. Voter registration tables will be open starting at 4 p.m. for people to check their voter status or to register.

Take Back the Night – Marching Against Sexual Assault – April 10

On Wednesday, April 10, survivors of sexual assault and their supporters will come together at Adelphi for Take Back the Night, an annual event focused on ending sexual violence, creating safe communities and respectful awareness.

The powerful event will feature a keynote speech, survivor speak-out, student performances and a march around campus.

Take Back the Night is an international event and non-profit organization with the mission of ending sexual, relationship, and domestic violence in all forms. Hundreds of events are held in more than 30 countries annually.

The event will take place in the University Center Ballroom from 6 to 10 p.m.