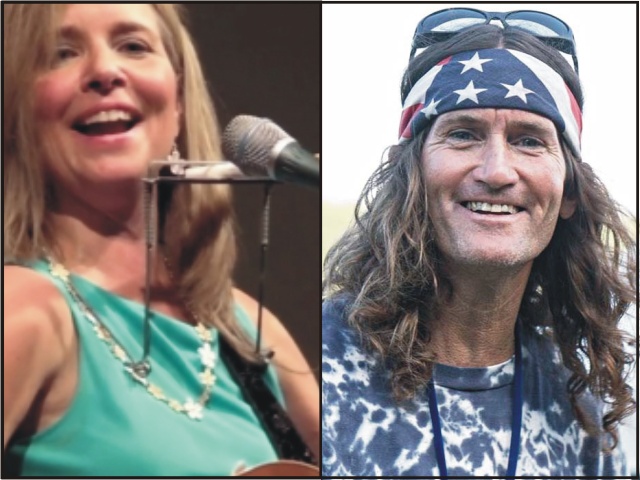 The 8:30 p.m. concert in the cinema’s Sky Room will be preceded by an open mic at 7:30 p.m. Tickets are $15 ($10 for Cinema Arts Centre and Folk Music Society of Huntington members) and will be available at the door.

McDoNoUgh! brings his unique brand of “icono-classic folk from the far side” to the Hard Luck Cafe after impressing folks during a short unplugged song swap at last summer’s Huntington Folk Festival and his February appearance as Dennis McLennon & Folko Ono in their “Bed-In for Folk!” at the 2019 Folk Alliance International conference in Montreal. He returns to Huntington not merely to entertain, but “to educate, inform, enlighten, incite, and inspire!,” he says. “Dig it yourself.”

A Clemson, S.C. native, Carla Ulbrich has performed at the Kerrville, Falcon Ridge, South Florida and Philadelphia Folk Festivals and at such notable venues as Atlanta’s Eddie’s Attic, Nashville’s Bluebird Café and New York City’s The Bitter End, among others. Ulbrich — who cites “Sesame Street,” camp songs and cat food commercials as her biggest musical influences — is primarily known for writing humorous songs about such topics as Waffle House, Klingons, and how rich she would be if she had a copyright on the “F” word.

On her 2016 release, Totally Average Woman, she also tiptoes into the social commentary realm with songs that touch on non-smokers’ rights, classroom animal dissection, and low-slung pants.

The Funny Music Project honored Ulbrich with the 2016 Logan Award for Outstanding Parody Song for “Cheek To Cheek,” one of the album’s tracks. Set to the tune of Irving Berlin’s song of the same name, this “Cheek To Cheek” is a witty commentary on cosmetic improvements (plastic surgery, botox and steroid injections).

Ulbrich is a survivor of catastrophic illness, which resulted in her book, “How Can You Not Laugh at a Time Like This,” and a CD of medical parodies entitled Sick Humor that lampoons her frustrating experiences with the US health care system. After a full recovery, Ulbrich is back to doing what she does best — writing and performing funny songs. Her songs are regularly played on Dr. Demento, Pandora.com, Sirius XM’s Laugh USA Radio, and a number of community and college radio stations. She has toured throughout the US and parts of the UK, once shared the bill with Twiggy the Water Skiing Squirrel, and was a background actor in “Sharknado 2.”

Established in 1973, Huntington’s Cinema Arts Centre (www.cinemaartscentre.org) seeks to bring the best of cinematic artistry to Long Island and use the power of film to expand the awareness and consciousness of our community. LI’s only not-for-profit, viewer-supported independent cinema presents a wide array of films that are often accompanied by discussions and guest speakers.

Founded in the late 1960s, the Folk Music Society of Huntington (www.fmsh.org, 631-425-2925) presents two monthly concert series, a monthly folk jam, and an annual folk festival in conjunction with the Huntington Arts Council. Its first Saturday concert series at the Congregational Church of Huntington in Centerport continues on April 6 with singer-songwriter Cheryl Wheeler.