The world is a stressful place. We all have ways of dealing with stress, but one thing’s for sure: we could all use a little more relaxation in our lives. Whether you’re looking to get away from it all or just want to chill out at home, weed is one of the best ways to relax and unwind.

It’s hard to explain what makes weed so relaxing, but once you try it, you’ll know what we mean! The best way to consume weed is to decarb it.

Decarbing is the technique of eliminating the carboxylic acid molecule and converting it into carbon dioxide and water. The process of decarboxylation is necessary for some cannabis strains to convert THCA into THC. 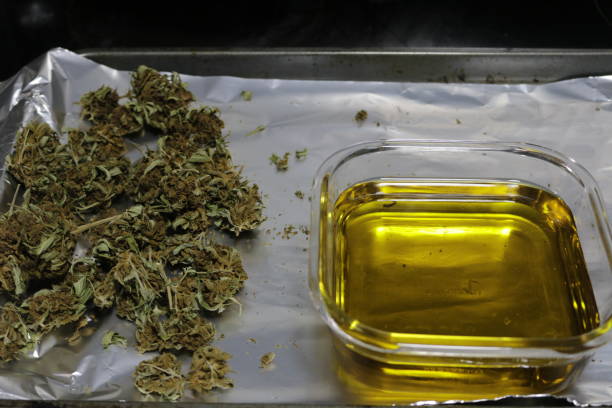 What Is The Purpose Of Decarbing Weed?

Decarbing is a process that involves heating your CBD flower in the oven. This process makes extracting THC and CBD from the raw cannabis plant easier and gives you a more potent and flavorful product.

Perhaps you are curious about why we decarb weed in the first place. Well, It’s because of how THC is stored in cannabis. When you vape or smoke cannabis, you burn off THC by heating it. By heating cannabis raw, it undergoes a chemical reaction that releases a carboxyl group, making it psychoactive.

Decarbing allows you to preserve as much of this precious chemical as possible. Hence, making your cannabis edibles much stronger than they would be otherwise. Many members of the cannabis community are divided on whether it is more appropriate to break up your weed or grind it.

Decarboxylation of weed can be done in an oven, on a grill, or with an electric burner. Some specialized devices can help you decarb your weed faster and more effectively. Moreover, they are more effective than a traditional oven or stovetop method.

Decarbing your weed with the oven only requires a few pieces of equipment:

Decarbing weed is a process that can be done at home, and it’s so much easier than you think!

Step 1: Turn On The Oven

First, make sure your oven is set to 250 degrees Fahrenheit. If it isn’t, adjust it now. You don’t want to burn your weed—you just want it to be decarbed cannabis.

Step 2: Get The Surface Ready

Next, find a large enough surface to lay out your weed on top of. This should be made of some sort of heat-resistant material so that it doesn’t melt or get damaged by being in the oven.

Glass or ceramic work well because they’re nonreactive and won’t transfer heat as quickly as metal surfaces do, which can cause more rapid degradation of THC content over time with repeated use (not to mention they look cool!).

If you’re using cannabis buds instead of kief or hash, then break them up into smaller pieces by hand or with scissors so that they’ll be easier to handle later when baking them inside their container during the cooking time at 250 degrees Fahrenheit (120 degrees Celsius).

Step 4: Get Your Baking Container Ready

If you’re using a glass or ceramic container, it’s best to line it with parchment paper so that nothing sticks to the sides and burns during baking.

If you’re using a metal tin, skip this step because there’s no need for lining since there won’t be anything inside.

Once ready to bake your weed, preheat your oven to 250°F (120°C) and place your container inside. You’ll want to keep the temperature consistent throughout baking, so set a timer for two hours, and don’t open the oven door until it rings or goes off.

Once your weed has been baked for two hours, remove it from the oven and let its cannabis material fully cool down.

Use parchment paper if you plan to bake in a metal container to prevent anything from sticking to the sides.

Other Methods: The Mason Jar

One of the most popular methods is using a mason jar (or any airtight glass container).

Weed is a miraculous flower that has many benefits.Many reputed brands are selling such products online so if you want you can buy weed online. It is perfect for use in tea, raw consumption, or smoking it. It tastes like mint and smells like a sweet raw cannabis flower.

You can gain health benefits from it. Weed helps you feel relaxed and calm, and it also makes you feel happy and cheerful.

This is why people use weed at parties and festivals to have fun with friends and family members. The best thing about weed is that it is not addictive like alcohol or cigarettes are! There is no risk of becoming addicted to it if you use it as much as you want!

Another method is to use an oven-safe dish—like a Dutch oven—and fill it halfway with water.

Place your weed in the dish and cover it with foil so nothing gets into the water (or vice versa). Then put it in the oven at 250°F for 60 minutes. This method works well if you’re trying to decarb cannabis in small amounts or don’t have access to an airtight container like a mason jar.

Sous vide is a cooking method that involves submerging foods in a precisely controlled water bath and cooking them to the desired doneness. The sous vide method can cook almost any food, but it’s especially useful for delicate meats and vegetables.

This technique is popular among chefs because it allows them to cook the food at a lower temperature than traditional methods. Sous vide is a way of cooking food in a water-resealable sack in a carefully regulated water bath.

To decarb weed using sous vide, you’ll need to grind up your weed. Then mix the ground weed with some oil—we recommend cannabis oil or cannabis-infused olive oil—and spread it on a baking sheet.

Bake at 200°F for about an hour until you begin to see browning. After that, remove from the oven and let cool completely before handling. When you’re ready to use your decarboxylate cannabis, place it in a mason jar or other airtight container!

Conclusion: Which Is The Best Method To Decarb weed?

So there you have it, folks. It is obviously important for those seeking psychoactive effects from cannabis edibles to remember this. The euphoric feeling of being high is one of the most relaxing feelings in the world, and it’s something that everyone should experience at least once. However, before buying such a product ensure to check for your state regulations about cannabis or you can research “ where is weed legal”?

There’s no doubt that cannabis decarboxylation is a little confusing at first, but once you’ve got the hang of it, it’s not that hard. Decarbing weed is the process of removing all of those tasty cannabinoids from your cannabis plant. By using this method, weed becomes more potent.

It’s not an easy process, but if you follow the steps outlined above, you’ll be able to decarb your cannabis in no time. Hopefully, you have found this guide helpful in understanding how to decarb weed and use it in edibles and topicals. Now you are good to go to make your favorite recipes with raw cannabis.

How To Hotbox Like A Pro For Getting Higher?

Is Delta-8 Legal In Minnesota? Is It Legal & Where To Buy Them?