Home Blog Twitter Is In a Frenzy To Get Invited to the Cereal Club... 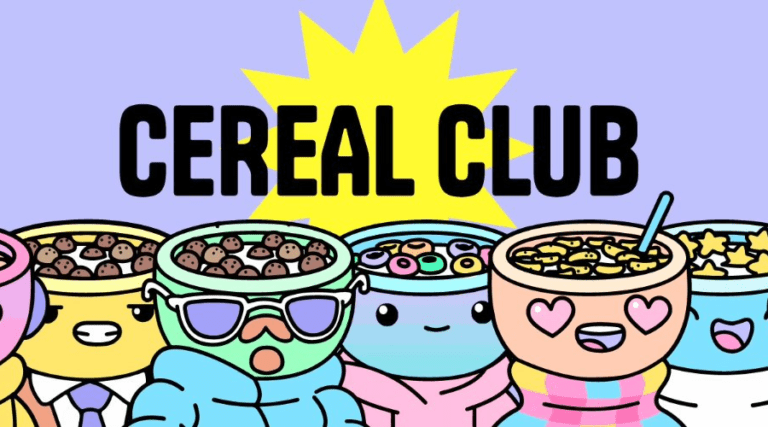 NFTs have seen an immense surge in popularity, and thousands worldwide are profiting from trading these Non-Fungible Tokens. Among the most protruding sales is Jack Dorsey, the Twitter CEO, who sold the first tweet on the platform as an NFT for a massive $2.9 million.

However, you don’t have to be the founder of a popular platform to get in on the action. If you have a computer, the internet, and a couple of bucks in your pocket, you’re good to go!

One of the latest batches of NFTs that have taken Twitter by storm in the past few days is Cereal Club. Read on as we dig deeper into Cereal Club and discover what made the token drive Twitter users into a frenzy.

What is the Cereal Club NFT?

The Cereal Club NFT is a collection of cereal-inspired digital artwork, which is currently only in possession of members with exclusive access.

The cereal bowl artwork pays homage to a simpler time in our lives being children, waking up on a saturday morning enjoying a nice bowl of cereal and watching some cartoons. Its art represents a good-feeling and the mission behind it takes Cereal Club to the next level with their purchasable non-fungible token.

These pieces of artwork can then be bought and sold for a profit in the future but more importantly make you eligible for certain perks within the community.

The creators behind Cereal Club have a clear picture of how the Cereal Club NFT batch will move forward. The creators have split the roadmap into phases, each with additional features over the previous.

First Phase: Members of the Cereal Club will receive their bowls, called munchers.

Third Phase: Merchandise will be released and made available to members for purchase, which includes some awesome collaborations.

Fourth Phase: Cereal Club will integrate other popular ecosystems into its community

The Cereal Club team will also give away part of the profits to charity funds. Members of the Cereal Club will choose the organization that receives this donation.

In essence, they aim to also create a decentralized organization underneath their NFTs known as a DAO. Holders of the Club’s NFT will be able to propose and create projects on Web3. This ability will allow community members to have a bigger say in how the Cereal Club moves forward.

As the community grows and word of the Cereal Club spreads, merch and other utility items will also be released. Plus, you will get the chance to collaborate with other communities and become a part of in-person meetups among holders.

The Cereal Club Twitter page gained more than 45,000 followers in 10 days. The increase in popularity is evident, and the number of people interested in NFTs continues to rise.

The number of people competing to win an invite to the Discord server also increased with the rising popularity. For example, the recent tweet by Cereal Club, which promised an invite link to a random winner, got approximately 5,000 retweets.

Some dedicated fans of the Club also made impressive fan art to express their liking for the NFT project. In return, Cereal Labs featured them on their official page and applauded the effort.

Cereal Club has also given back to its followers. They recently gave away $10,000 in Etherium to two random winners who came up with a creative name for their cereal flavors.

The team has partnered with several brands & NFT projects to spread the word and get more people into the Cereal Club.

Many of these collaborations provide the Club authenticity when well-known communities partner with them.

And the list goes on with other leaders from top fortune-500 companies. Cereal Club is becoming the best place for talent from all different backgrounds to come together.

When Will the Cereal Club NFT Launch?

While the creators haven’t decided on the exact launch date, they have set a deadline for somewhere at the end of January.

Right now it looks like the only way to get your hands on this will be through either getting access to the NFT on their discord, being a part of their dutch-style auction, or buying one on secondary markets such as Opensea.

Cereal Club has a total of 10,000 NFTs, which will be available for members to buy, sell, or hold.

The Discord server for Cereal Club is invite-only at the moment. To get an invite, you need to find special codes the team has dropped over the internet and within other communities for access or by following @CerealClubNFT on Twitter. Your luck might shine, and you may end up being the lucky winner of an invite there.

By becoming a part of the community and joining the server, you will get a chance to learn more. In addition, members will have access to a network of people from various prominent communities and will be able to interact with them. These include crypto exchange representatives, NFT artists, and investors.

Luckily, Cereal Club holds a contest every once in a while, and a random person that retweets wins an invite link. The key is to stay active and interact with the tweets posted, and you may be the next participant to get noticed and given access.

Are You Ready for the Cereal Club?

The growth of NFTs is undeniable, and many are profiting from it. Cereal Club is one of the latest batches and can grow a great deal. Twitter has noticed this, and people have rushed to access the invite-only Discord server.

Searching for the toy in a cereal box has always been an essential part of the day for most people throughout their childhood. Cereal Club has turned this into a piece of digital artwork.

You can get in on the wave by following the Club on Twitter and interacting with their posts to get a chance to be invited to the server.

The Club has a clear picture of how the community will progress in the coming years. They have split the plan into several phases, including launching merchandise and a range of cereals you can get your hands on.

The community members will get exclusive access and have a say in what goes on behind the scenes. Even if you miss the initial mint, the NFTs will be available for purchase on Opensea.