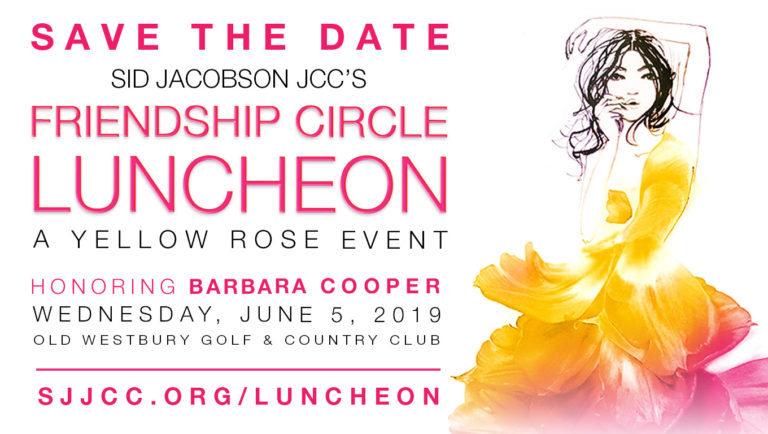 The annual luncheon raises funds to provide financial sustainability for the programs at Sid Jacobson JCC that improve the lives of those afflicted with dementia and other chronic conditions at any age or stage as well as providing support and education for their families.

“Sid Jacobson JCC is a national leader in providing care for those suffering from chronic illnesses such as Alzheimer’s, dementia, and Parkinson’s,” says Connie Wasserman, associate executive director, Sid Jacobson JCC. “Our programs provide a structured, stimulating environment that encourages social, cognitive, and physical stimulation through a variety of group activities specifically designed for those with memory or functional impairment as a result of these chronic illnesses.”

This year’s honoree, Cooper, is a co-chair of Sid Jacobson JCC’s Yellow Rose Society, and a Friendship Circle Luncheon executive committee member. As a longtime, active member of the JCC, she also serves on the board of directors and the cultural arts committee. Cooper is also a passionate member of UJA Federation of New York and is active on the Long Island Birthright Council.

“My connection with SJJCC’s Adult Day Program began when my mother-in-law was diagnosed with dementia and our family decided to enroll her in the JCC’s program,” says Cooper. “It changed the course of both my life and the lives of my family members. From this experience, I made it my personal goal to further the community’s knowledge of dementia and to raise awareness of the amazing programs the JCC has to offer for those suffering from this degenerative illness.”

Cantone gained critical acclaim with his Tony-nominated one-man show “Laugh Whore,” and its appearance at the Cort Theatre on Broadway to the Showtime Network special. He also starred on Broadway as Sam Byck in the Tony-winning “Assassins” and as Buzz in the Tony award-winning dramatic comedy, “Love! Valor! Compassion!” Cantone is currently starring in “A Room Of My Own” at the Abingdon Theatre. His feature film work includes “Quiz Show,” directed by Robert Redford, Sony’s animated film, “Surf’s Up,” “In Stereo,” and “The Aristocrats.” Cantone is widely known for his role as Anthony Marentino in “Sex and the City 1” and “Sex and the City 2,” and can still be seen in HBO’s television series “Sex and the City,” in syndication.

For more information about SJJCC’s Friendship Circle Luncheon, A Yellow Rose Event, to purchase tickets, or to make a donation, visit sjjcc.org/luncheon or contact Bridgette Troisi, assistant director of development at 516-484-1545 ext. 141 or [email protected]