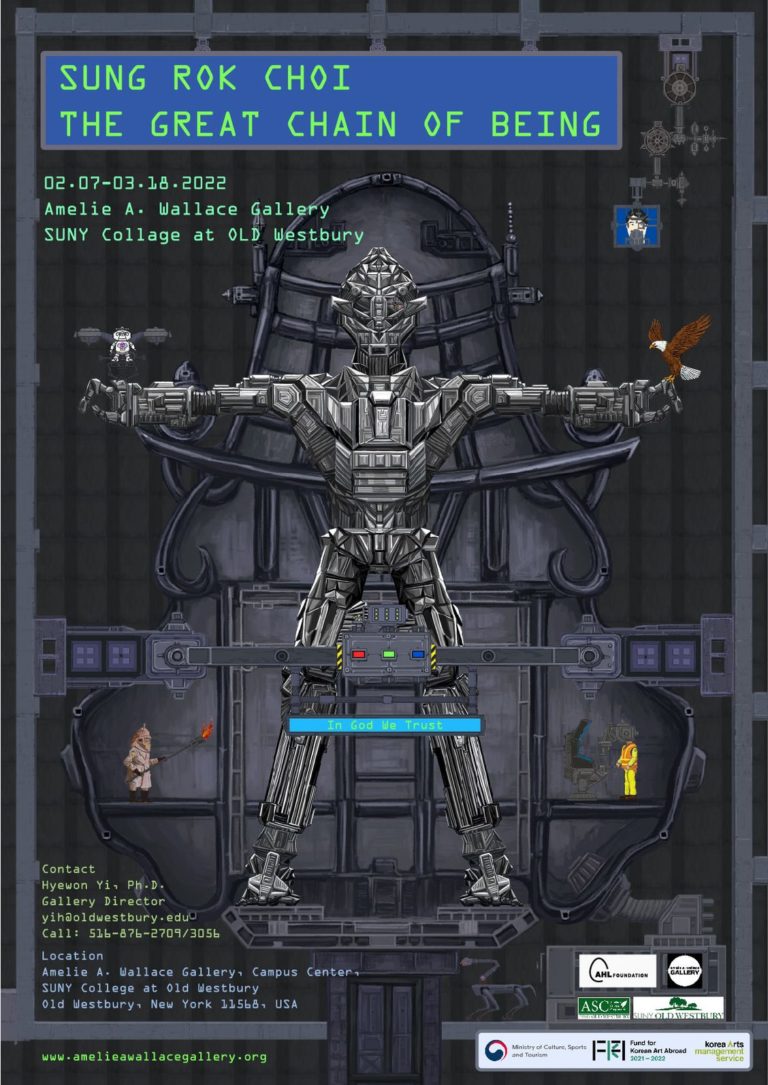 The Amelie A. Wallace Gallery at the State University of New York College at Old Westbury is excited to announce the opening of Sung Rok Choi: The Great Chain of Being, a solo exhibition of new media art.

Sung Rok Choi’s animations present spectacle on dynamic screens that resonate with our current media culture saturated with video games, cinema, and surveillance cameras. Choi’s art expresses his tragicomic worldview through images that explore the natural and human forces that have formed our society.

Seeking the underlying causes of humanity’s problems, his work culminates in a critique of civilization.

The Great Chain of Being consists of five major works that lie at the intersection of animation, video games, digital paintings, and drone camera views.

Exhibiting these series for the first time in the U.S., Choi explores his earlier critiques of machines expressed in 2-D animation works compartmentalized into sections that indicate parts of the world.

While Choi’s epic digital animation is imaginary, the viewer cannot escape a world ensnared in current and impending crises of climate change, technological singularity, and a global pandemic.

Borrowing from an ancient philosophical concept that structures the relationships of the world in hierarchical strata, Choi interprets our current society as being populated by unforeseen elements set in a factory-like system.

The god of the ancient belief is here replaced by a computer system operated by a scientist. The battle between a robot and a monster, ending in the robot’s victory, suggests the hope that technology and science will prevail over the mutants.

Operation Mole–Final Stand (2018) comments on a covert system in which humans appear as victims of weapons of war, leading to an apocalypse that returns Earth to an uncorrupted natural state, followed by civilization, only to end in worldwide fire.

Sung Rok Choi (b. 1978, Korea; lives and works in Seoul) engages digital animation and video work to explore contemporary landscapes and narratives generated by technology. He is interested in understanding how relationships change in response to technological advancements.

Choi has shown his work in Korea and abroad over the past ten years. He holds a BFA from Hong-Ik University, Seoul, Korea, and an MFA from the School of Art, Carnegie Mellon University, Pittsburgh.

Career highlights include his participation in “Project 2” in Busan Biennial in 2016, Ars Electronica Festival, Deep Space 8K, Linz, Austria, and Gwangju Media Art Festival, Korea in 2017. His “Operation Mole / Final Stand” was exhibited in SeMA Bunker, Korea in 2018. His work was shown at AVS: Used Future, Soorim Cultural Foundation, Seoul, and at Viborg Animation Festival, Denmark in 2019. His “Great Chain of Being” was shown in a solo exhibition at Gallery Chosun, Seoul, after which Choi expanded the work and exhibited the updated version on the outdoor media façade during the 2020 Paradise Art Lab Festival in Incheon. His most recent media façade work, “Genesis Canyon,” was commissioned by Asia Culture Center and was exhibited outdoors in fall 2021.

Pandemic Protocol:
Masks are required to enter the gallery. No drinks or food is allowed in the gallery.