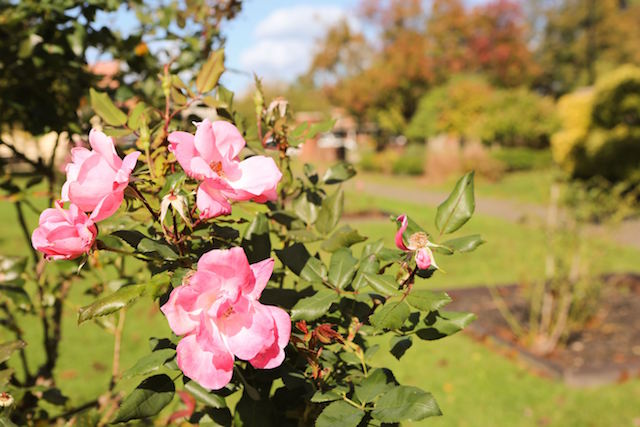 The historic Rose Garden on the Village Green has seen a rebirth. Great Neck’s prized Rosarium has welcomed a myriad of new rose bushes and further improvements are underway.

It was the idyllic setting for a musical performance by students of North High School’s Choral Choir on a balmy Sunday in June. Guests sat in the cool shade of the sprawling Japanese maple and enjoyed the fragrance of blooming roses as they listened to the music. Accompanied by Dr. Pamela Levy, Chairman of Fine & Performing Arts at the high school; Alex Mousazadeh, Chantal Sadighpour, Ashley Schusselbergg, Leeor Elias, Daisy Korman and Sara Rafael performed Broadway show songs and operatic arias. Lakeville and North Middle instrumental music teacher Jacquelyn Tomlet provided a splendid saxophone solo, as well. The a cappella chorus topped off the afternoon with the final song. The concert was an offering of the Great Neck Parks District in collaboration with the Great Neck Garden Club.

As a June tribute to the newly blooming roses, Jason Capote, curator of the Rose Garden, gave a slide presentation about the history of the garden at Great Neck House. This was followed by a tour of the garden, during which rose enthusiasts were able to take advantage of Jason’s vast knowledge of the history and care of roses.

Plans are underway for other activities in this beautiful space. As this is a “no spray” garden, it will be visited by both the Long Island Rose Society and Manhattan Rose Society who will hold a joint meeting at Great Neck House on September 14. They will present a mini rose show and also engage with the public in the Rose Garden to discuss rose culture and answer questions. There will be consulting rosarians on hand to identify rose diseases and present treatment options. A few years ago, the LIRS generously donated twelve rose bushes and its members have provided advise and counsel throughout the years.

The entire Village Green (including the Rose Garden, which lies behind the protective stone wall) was designed in 1923 by noted landscape architect Beatrix Ferrand who also designed the Rockefeller Rose Garden at the New York Botanical Garden, the gardens at Dumbarton Oaks in Washington, D.C., and many other important gardens. The Rose Garden was improved in 1950 with redesigned beds, facilitated by developments in rose culture, which gave rise to the modern hybrid tea and other varieties which now fill the garden. Nothing of consequence was done again until 2003, after which efforts to properly maintain it were undertaken by the GN Parks District with the cooperation of the Great Neck Garden Club.

A major breakthrough came last year with the addition of rosarian Jason Capote, who has overseen a near-total renovation of the garden. Through his efforts, almost 300 new bushes have been donated by noted rose growers. Despite the relentless spring rains, Jason and Maintenance Supervisor, Rick Canfield, along with his staff, worked tirelessly to plant the new offerings, create some new beds and artfully reorganize the garden. Other upgrades will complete the renovation. GNPD Superintendent Jason Marra has been extremely supportive of these efforts.