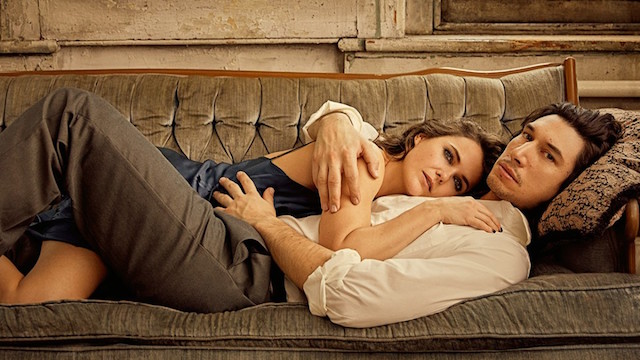 When the revival of Lanford Wilson’s play “Burn This” opens, the characters are in mourning. Robbie, a young choreographer, and his lover Dom have died in a freak boating accident. Robbie’s two roommates, dancer turned-choreographer Anna (Keri Russell) and Larry (Brandon Uranowitz) are trying to cope.

Upon hearing the news, Anna’s sometimes-boyfriend Burton (David Furr) comes to console her. The first scene is all exposition as Larry and Anna share details of Robbie’s funeral and family with Burton. The three characters are understandably despondent and a bit lifeless. In fact, there’s little energy or life in the play until a month later when Robbie’s older brother “Pale” bursts in, like a bolt of lightning.

He’s come to collect Robbie’s things. Obviously high or drunk or both, he rambles, curses and rants. He has no filter, saying anything that’s on his mind, even though some of it’s insulting. As portrayed by Adam Driver, “Pale” (a nickname derived from VSOP Brandy  — Very Superior Old Pale) is a vibrant character, bigger than life. Either because of his resemblance to Robbie or because she recognizes a kindred spirit, Anna tolerates him. Later that evening, she even goes to bed with him.

Suddenly “Burn This” has energy and vitality. Physically and theatrically, Driver takes up the entire stage when he enters, invigorating the play. Whether he’s singing Springsteen’s “Dancing in the Dark” or referring to himself as a “roving fireman putting out someone else’s fires,” Pale creates sparks. Even when make startling comments, weeping loudly or tossing in a non sequitur, he’s exciting. That’s due to Driver’s presence and energy. His fire and passion are the best aspects of Wilson’s play, energizing it.

Although Driver appears to have the juicier part, Russell is actually onstage more of the time. Yet she does little to change her emotion, tenor or tone of voice. She’s too robotic, and when her Anna gets together with Pale, it’s doesn’t make much sense because sadly, there’s little chemistry between them.

Directed by Michael Mayer, the play really deals with feelings and the way people hold each other at bay, not allowing others to get close. Burton, a screenwriter, advises, “make it personal, tell the story and then write ‘burn this’ on it.” Getting personal is dangerous and threatening and more so when personified by Pale. Anna throws him out, saying that he’s dangerous and she doesn’t feel safe. Driver, with his fidgety ways, looming and powerful presence is inflammatory, but Russell is passive and one-note. Ironically, he’s anything but pale and the contrast makes Russell seem even more bland.

One could contend that Pale is too powerful a personality and makes Anna appear weak, but others have suggested that “Burn This” is actually Anna’s play since she has more stage time. In fact, Anna actually dictates their relationship. Unfortunately, even when Russell is with the other two actors, she still is too flat.

Often plays rely on star power to bring in audiences because it’s exciting seeing favorite television personalities onstage. Adam Driver won a legion of fans from his role as Hannah’s sometimes boyfriend Adam in “Girls.” Kerri Russell received acclaim for her role as a clever manipulative Russian spy Elizabeth Jennings in “The Americans.” However, theater is different from television and movies, and sometimes actors can’t make the transition.

“You can’t start a fire without a spark,” and Driver is ablaze in “Burn This.” Unfortunately, Russell isn’t the right kindling to create a rousing fire.