The officers were patrolling near the intersection of Jericho Turnpike and Barwick Street around 1:55 a.m. when they heard a “loud cutting sound and observed a large number of sparks and smoke emanating from underneath a parked gray 2007 Toyota,” according to a statement from the department.

Anthony Garcia, 26, of E. 140th St. was operating a battery-powered saw and had allegedly removed the vehicle’s catalytic converter. He was accompanied by Johann Estrella, 33, of Bronx Boulevard. Both were arrested without incident. 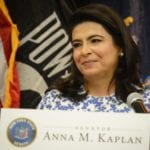