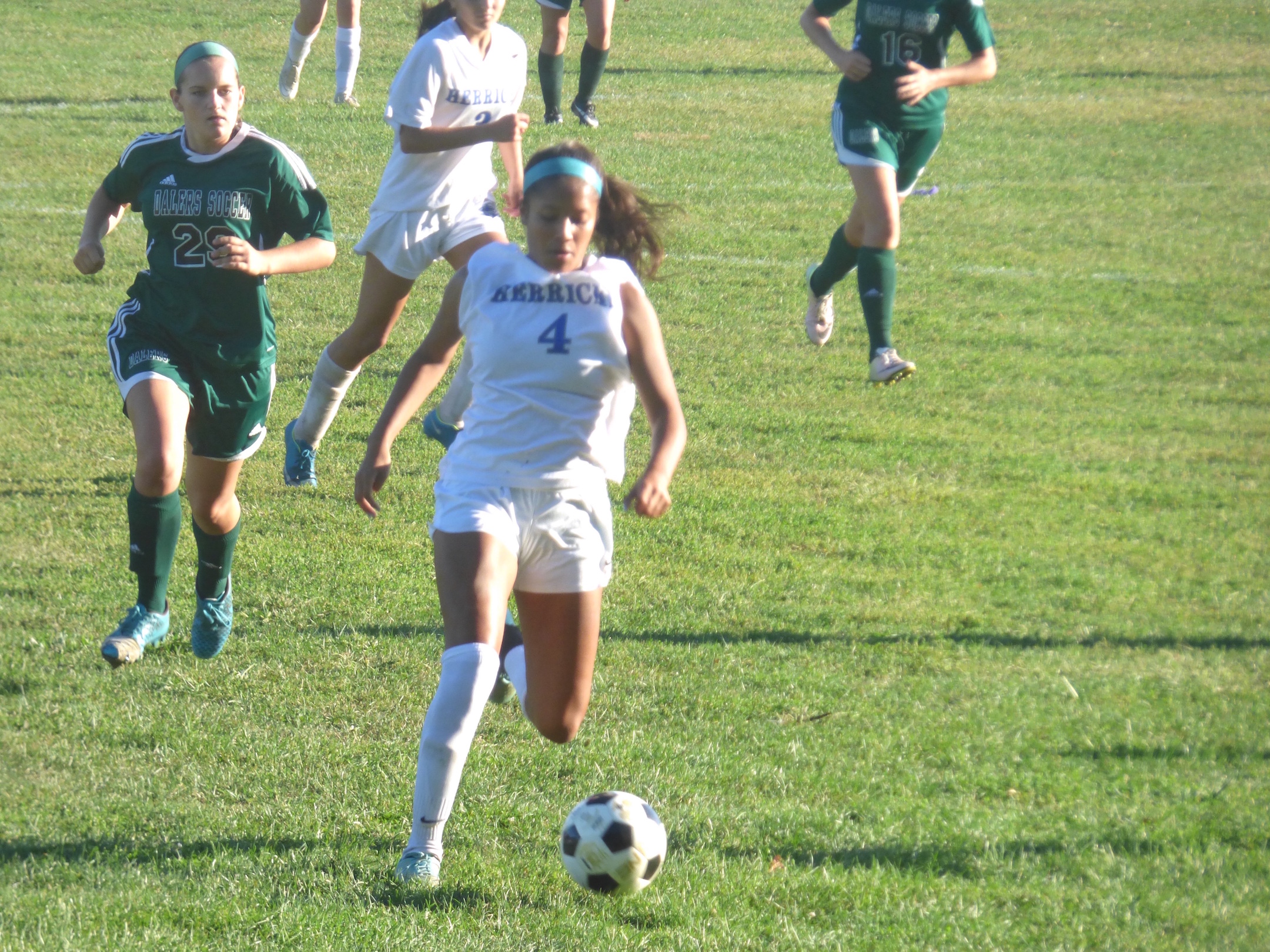 Caitlin Cosme was supposed to be a tennis player.

Her parents both played professionally, and Cosme, now a senior at Herricks High School, picked up a racquet when she was younger, she said.

Her parents, John Cosme and Hemel Meghani Cosme, were disappointed when she fell in love with soccer at age 7, she said.

But they’ve come around now that she’s proven herself to be one of the best in the game.

“Tennis is such a difficult sport, especially because it’s all you, and I think that that kind of freaked me out for a while,” said Cosme, a New Hyde Park resident. “And I think that when you’re around people who are great and can motivate you … I think that really helped me out, too.”

After she graduates in June, Cosme will head to Duke University to play college soccer.

Her commitment to Duke followed a season in which she made the Gatorade All-American team and became the first defender to be named Most Valuable Player at the All-American game.

She’s known on the field as a leader who motivates every player around her to be better, a quality that’s hard to find in players her age, said Jessica Henry, the Herricks High School varsity girls soccer coach.

“Everybody began to lift up their game when she lifted her game,” Henry said. “She raised the bar for everyone around her.”

While Cosme has always felt like a natural leader, soccer did not come naturally — she had to work hard to develop the skills that have led her to the top, she said.

Cosme usually spends six days a week training, practicing or playing games with the Herricks squad or the Albertson Fury, one of the top club teams on Long Island, she said.

Since her freshman year, Cosme has come into her own not just as a player, but as an athletic leader, Henry said.

She led the Herricks team to the quarterfinals in the state playoffs in her junior and senior years, and has consistently led the team in goals and assists, Henry said.

Even toward the end of her sophomore year, Cosme was able to motivate her fellow players without drawing attention to herself, something rare in a player that young, Henry said.

Robbie Church, the head coach of Duke’s women’s soccer team, recognized that quality, calling Cosme “one of the best leaders that we’ve ever seen as a youth player.”

“Overall, she has a great skill set,” Church said in a statement announcing Cosme’s commitment to the school. “We look forward to her battling and really pushing our players to be able to see minutes. I think Caitlin can have a major impact on our program.”

Cosme attributes her drive to her parents and her older sister, Taylor, who plays tennis at Brown University.

Her sister consistently works hard toward her goals, and her parents have always pushed her toward success without putting too much pressure on her, she said.

“My dad’s thing is, you always want to try to be the best you can be, because you don’t want to go through life regretting not trying your hardest,” Cosme said.

Cosme fell in love with Duke when she first visited as a high school freshman, and its outstanding academic and athletic programs caused it to come out on top in her college search, she said.

Cosme isn’t certain what she will study at Duke, but she wants to be surgeon and the school has a top pre-medical program for female athletes, she said.

She knows playing soccer at an elite athletic college won’t be easy, but she’s both nervous and excited to start a “new chapter,” she said.