Incumbent Juleigh Chin will be running unopposed for a seat on the Herricks Board of Education.

Chin has been on the school board for six years and is a 14-year resident of the district. She is currently president of the Herricks Board of Education.

She supported past efforts to begin school classes later and has been part of a board that has overseen the hiring of a new superintendent, among other things. The board has also continued to keep the budget below the state tax cap.

The Herricks Board of Education has come under fire recently as Herricks teachers are  without a contract after almost 10 months. As the president of the board, Chin has said that the board and the Herricks Teachers Association have been actively engaging in negotiations.

“The board is hopeful that the next step in the process will result in an equitable resolution to this matter for all involved,” Chin said previously.

Efforts to reach Chin were unavailing. 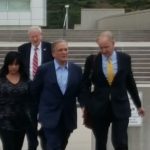