There is not a golf club on Long Island that hasn’t been impacted by the slowdown in golf. The combination of the 2008 economic crisis and the cultural zeitgeist which allows for less and less time for prolonged leisure activities has threatened the membership rolls and the viability of the country club.

It appears that even the glorious game of golf is not immune to factors like shrinking time or shrinking money.

Those outside of the world of golf may not care much about this state of affairs but I assure you that every self-respecting golfer cares and cares a great deal about their club life.

Each club in Nassau County has addressed this issue differently and this column is how one club, the historic Engineers Country Club in Roslyn Harbor, has dealt with the winds of change.

The changes that are happening at Engineers are based upon a number of key players and this column will focus only on its golf staff.
The history of Engineers dates back to 1917 when it was first established by members of the prestigious Engineers Club of Manhattan.

This group of blue bloods purchased 210 acres in Roslyn Harbor and hired English architect and golf professional Herbert Strong to design the course.

Strong was a founding member of the PGA and was famous for creating courses with titanic undulating greens and severe bunkers.

The course he built for these engineers was immediately recognized as world class and it hosted the 1919 PGA Championship and the 1920 U.S. Amateur where a young Bobby Jones was defeated by Francis Ouimet in the semi-finals.
Suffice it to say that Engineers Country Club is a well-established classic course that has been redesigned by Devereux Emmet and then by Frank Duane. I can honestly say that one round of golf at Engineers four years ago has permanently changed my putting stroke. I was invited to play a friendly round with my buddy Dr. Alan Sloyer early one summer’s day.

Dr. Sloyer is a remarkable human being with a long list of enviable traits including good looks, generosity, high IQ and artistic talent.

He’s the guy who took the photo you see in this article. As I warmed up before my round with him I realized how fast the putting green was.

I’m used to playing fast greens but these greens were pure and lightning fast and I immediately could see that if I didn’t discover better putting stroke right there and then I would be losing large dollars.

I immediately thought of Steve Stricker who uses his shoulders in a rocking fashion which takes the wrists out of the putt. I adopted that stroke on the spot and I’ve been a better putter ever since.

That is the awesome power of the greens at Engineers.

And with regard to par threes I think there are five really terrifying par threes in the world of golf.

You have the 11th at Shinnecock, the 5th and 10th at Pine Valley, the 17th at Sawgrass and the 14th at Engineers.

These are par threes where if you miss the green you are better off declaring the next shot unplayable and hitting another from the tee.
But enough with its history and back to my original question of how Engineers managed to withstand the changing times.

I was invited to the club recently by Kristina Krstevska to meet and chat with its new staff and see the course once again.

Country club life is based upon two elements. The first is the appearance and maintenance of the golf course. The second is about the subtle soft skills of its staff which will either turn you off or make you feel welcome.
One of the secrets of Engineers is in the soft skills of its head pro Chris Carter.

Chris has been mentored by some of the Met sections finest club pros including Doug Steffen, Mike Diffley and Rick Meskel. And he learned well.

Talking to Chris Carter is fun and easy. He’s open, engaging and disarming. His people skills are so good that he has executed one of Long Island’s greatest golf coups.

Based upon his charm, Chris has been able to attract to his teaching staff two former superstars on tour.

He now has Andrew Svoboda on his staff.

Andrew was the young star from St. John’s who won fourteen times in college including winning the Met Open as an amateur. He was on tour for years and played in four U.S. Opens and tied for second at the Zurich Classic.

Andrew can tell you what it’s like to play with Tiger Woods during the Bethpage “People’s Open”( “Tiger’s a nice guy”) what Bubba Watson’s greatest skill is (“Bubba is a master at scrambling and at putting”) and what it feels like to play in the last group on Sunday against Dustin Johnson (“Dustin hits it long, actually he hits it very long.”)
But then I learn that Chris also hired ex LPGA tour player Jeannie Bartholomew who was born and raised in Garden City.

Jeannie is an all-around athlete who excelled in basketball, field hockey and golf and who was a standout at Duke. She had a major impact on tour for many years and has played head to head against Beth Daniels as well as Lydia Ko.
For a club to say that they have on staff two superstars from the tour is amazing and I envy the lucky members who will get to know these two stars up close and personal. Engineers has done the impossible.

It has looked the current golf slowdown in the face and decided the best way to cope is to invest in the most valuable commodity of all, human capital.

By Dr. Tom Ferraro
(Syndicated exclusively to the papers of Blank Slate Media) 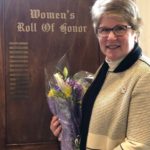 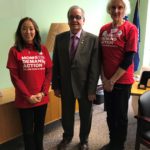