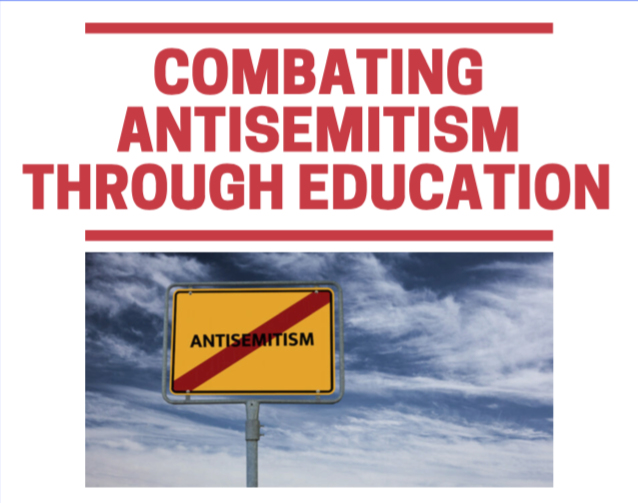 An event discussing ways to combat antisemitism through education will be held at North High School on Oct. 26 at 7 p.m. (Flyer courtesy of Judy Liman)

In an effort to educate individuals about and put a stop to antisemitic attacks on Long Island and across the world, officials in Great Neck and Nassau County will be part of an Oct. 26 event at 7 p.m. in the North High School auditorium.

Great Neck community leaders Lori Beth Schwartz and Judy Liman spearheaded the event in conjunction with the Great Neck school district, the Holocaust Memorial & Tolerance Center of Nassau County and the United Parent Teacher Council’s Total Community Involvment Committee. Beth Schwartz said the event was created to not just educate the community on the history of antisemitism, but to educate the educators who pass knowledge on to younger generations.

“Because of the alarming uptick in antisemitic incidents as well as all kinds of hate incidents, I think that those who can act have a responsibility to do so,” she said in a phone interview. “If we don’t understand the history of antisemitism, we cannot understand the hatred of the present.”

Liman acknowledged that the Great Neck school district’s curriculum already offers Holocaust education for high school students, but said highlighting that and discussing other potential ways to inform students on what is happening around the world is necessary.

“We know that the Great Neck school district is equipped and has programs in place, but now more than ever need to highlight those and pursue other ways to educate kids on acts of hatred occurring now,” Liman said in a phone interview.

“I thank our United Parent-Teacher Council’s Total Community Involvement Committee and the event chairpeople for orchestrating this event,” School Superintendent Teresa Prendergast said in a statement. “On behalf of my colleagues Dr. Lando and Ms. Newman, we look forward to presenting alongside our fellow speakers about this important topic.”

State Sen. Anna Kaplan (D-North Hills) promoted legislation for the state Senate to conduct a study on courses of study on the Holocaust in the New York’s schools in April.

Kaplan said that a recent study by the nonprofit Conference on Jewish Material Claims Against Germany revealed that 58% of New Yorkers aged 18 to 39 cannot name a single concentration camp, that 19% believe that Jews caused the Holocaust and that 28% believe the Holocaust is a myth or has been exaggerated. In each of these three metrics, New York had the worst score of any state in the country.

“When we talk about the Holocaust, we say never forget – but in order to forget something, you need to learn about it in the first place,” Kaplan said. “We’re doing a terrible job of teaching our kids about the atrocities of the Holocaust and the 6 million Jews who were murdered by the Nazis, and in a time when disinformation is exploding, and anti-Semitism and anti-Semitic violence are on the rise, it’s never been more important to teach the lessons of the Holocaust to the next generation.”

The bill would require a report on the findings of the study by the first of January after the bill becomes law, and direct the commissioner to promulgate rules and regulations ensuring school districts are offering instruction on the Holocaust in compliance with Section 801.

According to the Senate’s bill tracking system, the legislation has not yet been passed.

The event, which has limited in-person seating due to COVID-19 restrictions, will also be livestreamed. Those who wish to register can do so here or by following this link: https://interland3.donorperfect.net/weblink/WebLink.aspx?name=E79210&id=75.