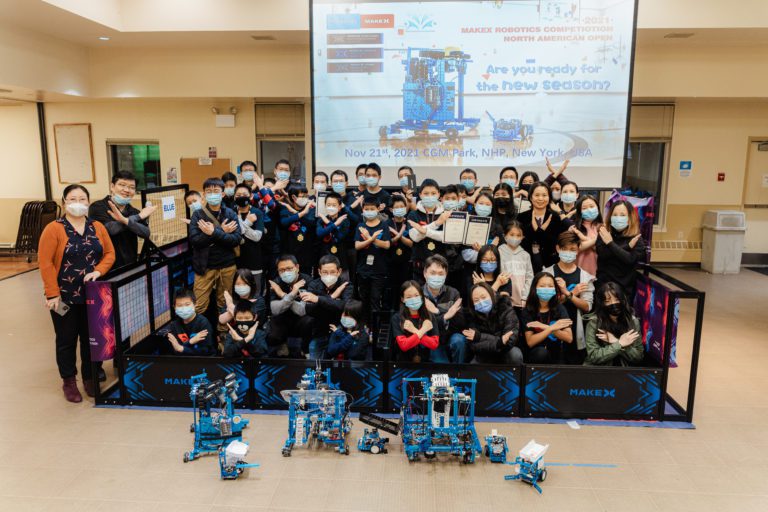 MakeX is a robotics competition platform that promotes multidisciplinary learning within the fields of science and technology. It aims at building a world where STEAM education is highly appreciated and young people are passionate about innovation by engaging them in exciting Robotics Competitions, STEAM Carnivals, and other activities.

Due to the concern of COVID19, all spectators and parents were asked to reserve a timeslot online, so the total number of persons inside the building can be limited. This allowed for a safer competition environment where social distancing and face masks were worn.

The competition included two levels, Starter (ages 7 to 13 years old) and Challenge (ages 12 to 18). The theme of MakeX Starter in 2021 is “Smart Transportation”, and the theme of Challenge is “Master of Intelligent Manufacturing”.

The competition is divided into two parts: an automatic control phase and a manual control phase. Competitors used Makeblock parts comprised of gears, sensors, wheels and other parts to design and build their own robot.

Each team programmed their robot to complete designated tasks with the best team earning the highest score. More than 30 students from the greater New York area participated in this year’s MakeX competition.

It is particularly worth mentioning that a large number of girls participated in the competition with several all-girl teams achieving great results.

Each winning team now qualifies to represent the United States in the 2022 MakeX Robotics Challenge Global Finals and has also been invited to the World Youth Robotics Invitational. Congratulations to them for their great achievement.

David Peng, head of YCIC (competition organizer), said that allowing children to be exposed to STEAM training and competitions from an early age can develop their intellectual potential, improve their hands-on ability, enhance creative thinking, exercise their ability to deal with setbacks, and drive teamwork to help solve problems.

The robot itself is a complex system that combines computer software programming, electronic components, and mechanical components. The robotics competition requires teammates to cooperate in order to identify and propose solutions to the problems. Through teamwork, the members are gaining valuable communication, collaboration, and leadership skills.

Peng knows that the knowledge gained by these competitors will help lay out the foundation in their future endeavors. There is a world of possibilities in STEAM ranging from artificial intelligence to the Internet of Things and the hope is that through these activities, we can cultivate the children’s interests and abilities in these aspects from an early age and prepare them to become leaders in the technological world of tomorrow.

Lily Wang, Partner at the co-organizer, New York Life Insurance, reviewed her experience of accompanying her daughter to participate in robotics competitions.

As a representative of New York Life, which has a century-old foundation, she is very happy to support this high-level youth robot competition and wish the children a smooth competition.

David Chiang, Director of the co-organizer Chinese American Association of North Hempstead, encouraged participating students to focus on participation, not be afraid of setbacks, and look to the future.

Peter An, director of CCLI, said that he has always dreamed of being a scientist and hopes that the children can open their minds and prepare for the future.

State Assemblywoman Gina Sillitti came to congratulate and presented the certificates to all the participating students. She said that this is the first time she has watched a robotics competition on the spot.

Andy Wang, the chief referee of the competition, also a guest referee for the MakeX Spark global online tournament in 2020, said that robotics activities are one of the few activities that can cultivate all-around capabilities and are future-oriented.

He was very happy to see more and more girls involved in STEM and especially robotics activities. He was also delighted to see many of the girls actively participate as volunteer referees as well.

Many parent spectators were very excited to inquire about the details of this competition and hope to have the opportunity for their children to participate in the future. There are a number of Indian and Hispanic parents who hope to introduce and expand this in their own communities.

After five months of planning, under the difficult environment of COVID19, YCIC turned the MakeX Robotics Competition North American Open from an idea into a reality.

Through a lot of hard work, preparation and dedication, MakeX North American Open committee members David Peng, Andy Wang, Sue Huang, and Carol Chen as well as a number of volunteers were able to deliver a successful event not for themselves, but for the number of excited competitors.

It is expected that in 2022, more communities and different ethnic groups will participate together to jointly promote the vigorous development of the MakeX robot competition in the United States.