Home Community News A gift of time given to USMMA 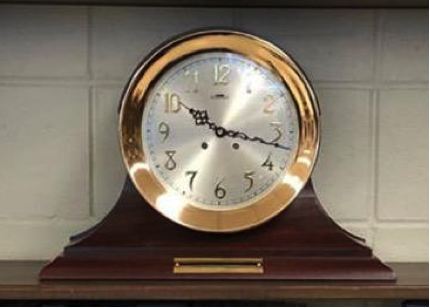 Everyone keeps treasured mementos of the past. Four generations of the Sargent Family lovingly valued a ship’s clock which had been mounted on the five-masted ship, The Mary B, captained by great-grandfather, Rudolf Sargent. According to family legend, when the ship was no longer fit to sail, it was dismantled, and the clock went to the captain. For over a hundred years, the clock was passed on through Rudolf’s son, grandfather Rufus Sargent, then to Rufus’s son, Dick’s father, Clyde Bailey Sargent who passed it on to his son, Richard Harvey Sargent. 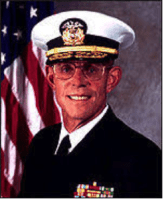 Now in his eighties, Col. Dick Sargent thought long and hard about the future of the beloved clock, an antique valued by the Chelsea Clock Company, maker of handcrafted clocks since 1897, at upward of $7,000. It would cost $2200 for Chelsea to refurbish the clock and another $100 shipping. As Sargent had no sons, he looked around for someone he greatly admired who deserved the treasured, historic gift, someone who would appreciate its history and the connection to the sea. Memories of the hundred or so Midshipmen that the Sargent team recruited and mentored for the United States Merchant Marine Academy over the years brought to mind former Superintendent of the academy, Vice Admiral Joseph D. Stewart.

During his tenure at the academy, the students loved VADM Stewart. They said it “felt amazing” to have the Superintendent not only run alongside them on daily runs, but to call them by first name was unheard of. The Admiral prided himself on learning the names of the students. They affectionately called him “Joey D.”

When Dick Sargent called the Admiral to tell him of his plan to give the clock to him, his response was typical. He said that it surely should go to someone worthier. But worthy is exactly why the clock has been given to the United States Merchant Marine Academy in his name, hopefully to be displayed in a dignified niche or other prominent place in the library.

Both men are graduates of the United States Naval Academy, Col. Sargent in 1957 and Vice Admiral Stewart in 1964. Stewart, earned a master’s degree in Operational Research from the U.S. Naval Postgraduate School, and another in Management from Salve Regina College and the Naval War College in Newport Rhode Island. A Marine aviator, Col. Sargent graduated from the Army War College at Carlisle, Pennsylvania. Both men entered the Marine Corps on graduation from USNA. Stewart served in leaderships roles in the Marine Corps from 1964–1998. After service of thirty-four years, he retired as a Major General. He joined the USMMA as Superintendent serving the Maritime Service from 1998–2008.

VADM Stewart’s honors are many. Having served in the Vietnam War, he earned several military awards. Among them are the Navy Distinguished Service Medal, the Defense Superior Service Medal, the Legion of Merit, and many others. He also served in many leadership capacities. On retirement from the Maritime Service, he held the rank of Vice Admiral. From Commanding a Logistics Base in Albany to serving as Deputy Chief of Staff for Installations and Logistics at Marine Corps Headquarters in Washington, D.C. to serving as Superintendent of the prestigious United States Merchant Marine Academy, Vice Admiral Stewart has served his country for nearly fifty years.

Col. Dick Sargent says, “We only know VADM Stewart as Superintendent. From working with scores of Midshipmen over the years, we saw his astute management skills, his dedication to educating young maritime officers, and his warmth and humanity. It is our distinct pleasure to gift our treasure in honor of this remarkable man.”

Captain Jim Tobin, Executive Director of the USMMA Alumni and Foundation Association presented the Chelsea clock on February 28, 2019 to be housed in the Schuyler Otis Bland Memorial Library.

Sailing enthusiasts may be interested in reading about Masts and Sails at www.friesian.com/masts and sails