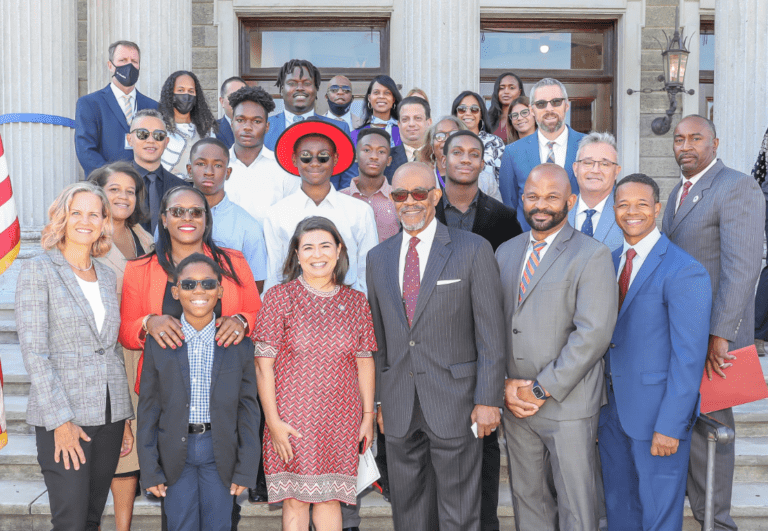 Nassau County Executive Laura Curran yesterday announced that the Roosevelt, Elmont, Sewanhaka and Uniondale school districts have become My Brother’s Keeper (MBK) communities, taking part in a State-funded program designed to help young men of color and all youth reach their full potential. County Executive Curran worked with these districts to facilitate their participation in the program that funds and fosters education and leadership among MBK scholars and their school districts. County Executive Curran was joined yesterday by government and school officials, and community leaders to recognize the incoming fellows of the MBK Program at the Theodore Roosevelt Executive Legislative Building.

By accepting the New York State My Brother’s Keeper Community Challenge, school districts, local government officials, and community partners commit to implementing actions and strategies to improve outcomes for boys and young men of color and all youth to help them realize their full potential. Roosevelt, Elmont, Sewanhaka and Uniondale school districts are receiving $11,900 annually (subject to legislative appropriation) to support the leadership development and growth of the Fellows, including mentoring. In addition, after a competitive RFP process, the My Brother’s Keeper Family and Community Engagement Program will provide Roosevelt and Uniondale school districts $125,000 annually (subject to legislative appropriation) for four years to increase the academic achievement and college and career readiness of boys and young men of color by developing and sustaining effective relationships with families and the community to achieve student success.

“This is an exciting initiative that will help more of our boys and young men stay on track and provide the support they need to reach their full potential,” said Nassau County Executive Laura Curran.

The My Brother’s Keeper or MBK initiative was founded by President Barrack Obama in 2014 as a national effort to eliminate opportunity gaps faced by boys and young men of color, so all young people have the chance to reach their full potential. In 2016, New York State became the first state to accept the President’s MBK challenge when the Assembly secured $20 million in the 2016-2017 state budget to fund programs that help boys and young men of color succeed inside and outside the classroom. Thirty-one communities in New York, including those announced yesterday as well as Hempstead and Brentwood on Long Island, take part in the program.

“It is great to be in Nassau County on this day, on this occasion, with so many committed people. What we are witnessing is the power of partnership,” said Dr. Anael Alston, Assistant Commissioner – New York State Office of Access, Equity, and Community Engagement. “There is plenty of power when the right people do the right thing at the right time in strategic places. Today that place is Nassau County.”

“As I look at these young men today and as I think about what this means. We’re trying to become globally ready. But before we can become globally ready, we’ve got to be locally steady,” Roosevelt School District Superintendent Dr. Deborah Wortham said. “This is what love looks like. We know it takes a village. This is the village right here.”

Uniondale School District Superintendent Dr. Monique Darrisaw-Akil thanked officials who pushed for funding and implementing the program, including County Executive Curran, local school boards and legislators. “Thank you for having the vision to invest in our young men and our communities,” Dr. Darrisaw-Akil said. “We are eager to engage in this work with our students, parents and community leaders so we can improve outcomes for all young people.”

The stars of the day, however were the students selected as MBK scholars who would not only obtain recognition and resources, but help others in their district. “I think this is what MBK is all about,” Elmont School District superintendent Kenneth Rosner said as he introduced a young man in the program. “We will do this program with the dedication and efficiency it deserves.” Jordan Burkett, a sixth grader at the Dutch Broadway Elementary School in Elmont, spoke about the significance of MBK. “As a young, black scholar, I am excited to be part of this very important program,” he said, adding he looks “forward to participating” in the program and events.

Brandon Long, a senior at Uniondale High School and an MBK fellow said he was happy to be part of the program and hoped to “help my community,” Long Island as a whole,” and that he was “looking forward to bringing this experience not to just me, but to everybody else.”

Assemblymember Michaelle Solages thanked County Executive Curran for her support and hoped the program would continue to expand. “This is wonderful. Kudos,” she said. “Let’s continue the work.”

Chancellor of the New York State Board of Regents Dr. Lester W. Young, Jr., said this program is about providing support to youth and investing in their success. “This is really about how we live up to the ideals that the nation was founded on,” Dr. Young said. “And ensure that each and every one of our young people is successful, not only in their education endeavors, but that they’re successful in life.”

New York State Regent Roger Tilles said it’s important to provide opportunities in all of Long Island’s districts. “Until every district is successful and every student has the same chance, we are far from meeting our success,” Tilles, who has served as a regent for 17 years, said. “I’ve been saying that over and over and over again. These legislators and the county executive have been working tirelessly to make sure that happens.”

As part of their commitment, each district will receive New York State funding and technical assistance to support the leadership development and growth of new MBK fellows.  Elmont plans to have a Teachers of Tomorrow program, including students who tutor and mentor. Uniondale hopes to reach out to and further involve alumni. “We want them to come in and do some mentoring,” Dr. Darrisaw-Akil said, adding she hoped those in the program would remain in contact. “It’s being part of a network. We’ll communicate all the time. That’s something you can’t put a price tag on.”

County Executive Curran in her closing remarks said that the program was about partnership, bettering not only individual lives, but many. “It’s partnerships that help us succeed. It’s relationships,” Curran said. “It’s building trust that makes good things happen for people. I’m excited about the possibilities.”