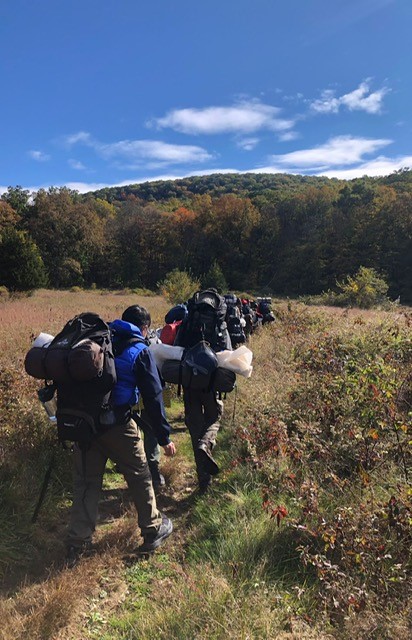 Sixteen scouts and six adults began the hike at the Elk Pen where the Appalachian trail enters Harriman State Park from the west. They hiked with full backpacks, carrying tents, stoves, food, as well as their personal gear. They hiked up Green Pond Mountain at least 400 feet in elevation.

After about 1.85 miles they reached the Lemon Squeezer, very narrow passageway formed when a large rock fell off the side of a cliff. They took the Arden Surebridge Trail for a little over a mile, to Times Square, where three trails cross near a huge boulder.

They spent some time there eating lunch and climbing on the boulder. From there they turned south on the Ramapo Dunderberg trail traversing a rock face ridge with views of valleys and distant mountains to the west and to the east.

At 4.35 miles, they reached the Bald Rocks Shelter where they set up camp. After gathering firewood for the campfire the scouts, in four patrols, cooked one-pot meal dinners on lightweight stoves.

One patrol cooked a vegetarian meal. The scouts built a large campfire on the rock face top of the mountain. Rain started during the campfire but lasted it only 15 minutes. In the morning, scouts boiled water for oatmeal breakfast, cleaned up, and headed south for about 1.35 miles to Route 106 where cars were waiting.

Troop 10 meets at the Manhasset-Lakeville Fire Department on 25 Prospect Street on Mondays at 7:30 pm to 9:00 pm on school days. If you are interested in joining Troop 10, please contact Dr. Dwight J Rosenstein at djrosenstein@gmail.com.