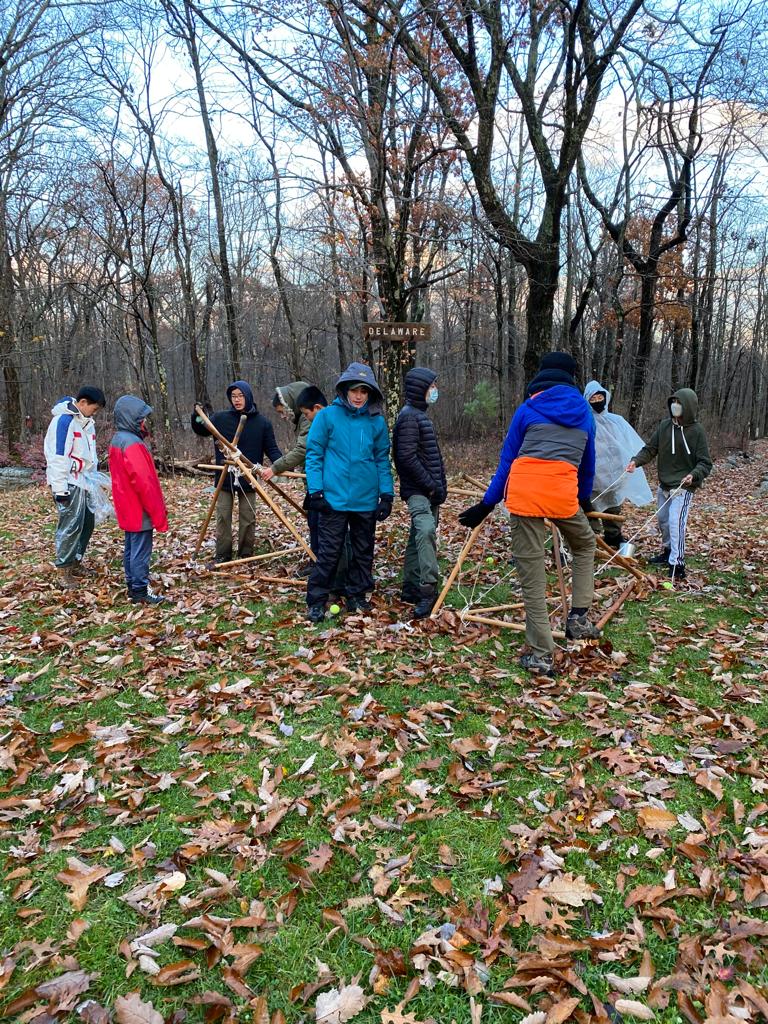 Troop 10 recently completed a successful overnight camping trip at Camp NoBeBoSco in western New Jersey. The November weekend was somewhat chilly and there was rain in the afternoon but not enough to dampen the spirits of 23 scouts and six adult leaders.

They set up tarps first to protect their gear from intermittent rain which at times was heavy and not brief. They took a hike for several miles to explore the camp.

Rain let up during the hike and when they returned to camp, they began their afternoon activity. Using several six 6 foot staves, rope and mostly square lashings, each patrol of about 6-7 scouts, supervised by older scouts, constructed ballistas, or catapults.

Patrols competed against each other, testing the integrity of their creations, for distance and accuracy. Throughout the afternoon the scouts collected a huge amount of wood and with some dry wood obtained by one of the adult leaders, they were able to sustain a large fire for long enough to make beds of red-hot coals to cook everyone’s Foil wrapped dinner.

After that, foil-wrapped desserts, such as banana boats (bananas, chocolate, and marshmallow), were heated on the coals and enjoyed around the campfire. The sky cleared and there were stars at night.

It was cold Sunday morning, but not below freezing. Breakfast was cooked on camp stoves and eaten rapidly. Then, time to clean up, pack up, comb the area for trash, and travel home to Great Neck. It doesn’t end there, however.

The scouts must set up and air out the wet tents to prevent mold and mildew which will make the tents unusable. Tents and other gear such as cooking utensils cleaned at home are then returned at a weekly troop meeting to be ready for the next camping trip.

Troop 10 meets at the Manhasset-Lakeville Fire Department on 25 Prospect Street on Mondays at 7:30 pm to 9:00 pm on school days. If you are interested in joining Troop 10, please contact Dr. Dwight J Rosenstein at djrosenstein@gmail.com.