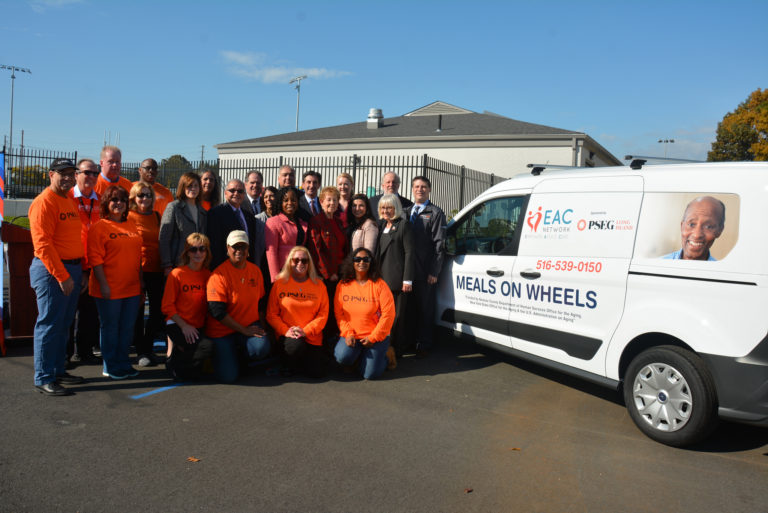 Some 75 households of seniors struggling with hunger in Nassau County have been removed from EAC’s Meals on Wheels waiting list as a result of van donated by PSEG Long Island.

“It’s very nice to welcome PSEG to the town for something other than a storm or a power outage,” North Hempstead Town Supervisor Judi Bosworth said.

“For many of us buying food and preparing meals is something we just do, it’s second nature,” Bosworth said. “For many of our seniors, food is not their first priority, especially when they are dealing with household needs and medical expenses.”

EAC Networks, which stands for empower, assist and care, is a volunteer-based program and the largest provider of Meals on Wheels in Nassau County, which brings healthy meals to those that may not be able to feed themselves. EAC President and CEO Lance Elder accepted the keys to the new van from PSEG Long Island Vice President of Power Markets Paul Napoli.

PSEG Long Island, in partnership with EcoMedia, a CBS company, funded $67,000 for the new van, which started delivering meals to those in need immediately following the unveiling.

“I think it means a great deal to them and a great deal to all of us,” Napoli said. “These are the people that went through the depression and World War II, the greatest generation, and they’ve continued to forge on.”

Napoli is also a member of EAC Network’s Board of Directors. In addition to the van, 3,000 prepared frozen meals were donated that can be used ahead of a weather event, Napoli said.

Some 25,000 hours of community volunteer work were put in last year by 2,400 PSEG employees, Napoli added.

“The new delivery van is the gift that keeps on giving,” EAC Network Senior Director of Senior and Nutrition Services Carol O’Neill said. “Thanks to the generosity, thousands of Nassau County seniors will receive the gift of nourishing food.”

“For so many seniors, not only is it the food but sometimes the volunteers are really the only contact that they have with the outside world,” Bosworth said. “It means it is food for the body and the soul.”