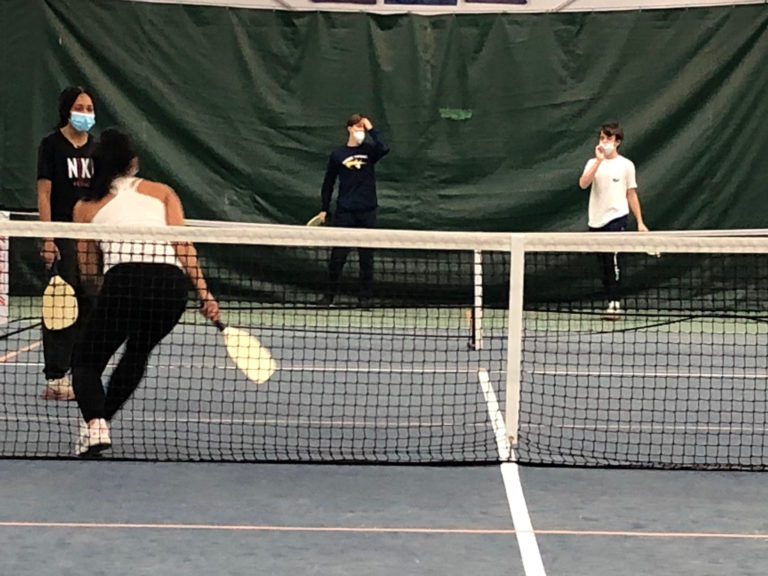 In September, Alistair Wright, a junior at Locust Valley’s Friends Academy, tore a ligament in his ankle while playing tennis.

As a result of this accident, NOSH, a program of the North Shore Soup Kitchen, which delivers weekly food supplies to more than 500 families living in Bayville, Glen Cove, Roslyn, Locust Valley and Sea Cliff , is now $4,500 further along in fundraising to support its vital work.

Wright, who lives in Douglaston, Queens, knew he’d be out of commission for a few months but he didn’t want to just sit around while healing; “I wanted to make good use of my time.”

A member of the Friends tennis team and an avid player since the age of 10, he missed the game and wanted a project that had something to do with tennis. Reaching out to Friends’ faculty members Erin Nolan and Rachael Arredondo for ideas, he was told about a fire sustained at NOSH’s former headquarters and the loss of equipment and food.

Said Wright: “I chose NOSH as the beneficiary for a fundraising event because through other volunteer work I had learned how widespread food insecurity is.” He saw a real need to raise both money and awareness.

And so Rally for Hunger, a pickleball tournament to benefit NOSH, was inaugurated. Why pickleball? Wright explained that it’s a game that combines elements of tennis, badminton and ping pong and is played indoors or out on a badminton-sized court. Pickleball, said Wright, “can be played by anyone, at any age.”

With the involvement of fellow Friends tennis team member Daniel Duke of Glen Head, and other school friends Austin Notaris, Russell Notaris and Quinn Dougherty, Wright started to build a plan and identify resources for Rally for Hunger.

First on tap was a talk with the head of Robbie Wagner’s Tournament Training Center in Glenwood Landing where he had been playing for six years; Wagner immediately agreed to donate his training venue for the event.

Wright went on to create a Rally for Hunger website and to design flyers that were posted throughout North Shore locations to create awareness of the event. He also spoke at several churches.

Present at the Rally for Hunger tournament was NSSK/NOSH board member and fundraising chairman Renee Swanson of Sea Cliff.

She said that the group was very gratified “at the number of people who have come forward to recognize the importance of our work and to raise funds for us.” Swanson added “I’m so impressed that such young people as Alistair and his Rally for Hunger team recognized the need and stepped up with such a well-thought-out and executed event.”

Player Arline Jacobs of Locust Valley also lauded the student organizers for “a flawless event; they did a great job start to finish.”