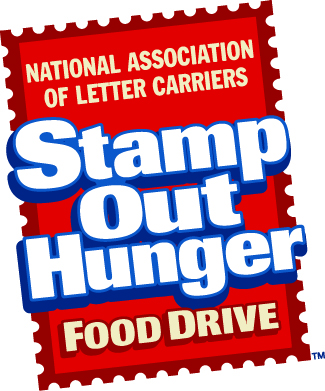 More than 300,000 Long Islanders face hunger and food insecurity at some point during the year according to Randi Shubin Dresner, president and CEO of Island Harvest Food bank.  The issue of hunger is often chronic for many who seek food support from the 500 food pantries, soup kitchens and feeding programs served by Island Harvest Food Bank. During the summer months, these resources often see shortages due to a falloff in donations, which typically peak around November and December.

Long Island residents can help their neighbors struggling with hunger by leaving a bag (or bags) of nonperishable food by their mailboxes on Saturday, May 12 as part of the National Association of Letter Carriers 26th annual Stamp Out Hunger food drive.  As the nation’s largest single-day food drive, postal carriers across the country will collect nonperishable food items donated by generous postal customers. All food donated locally will help Island Harvest Food Bank to provide supplemental food support to more than 300,000 Long Islanders who are at risk of hunger and food insecurity.

“Hunger on Long Island is a year-round issue and, unfortunately if you are seeking food assistance in November, December, or January, you are also in need at other times during the year, including the summer months,” says Shubin Dresner. “Every donation made on Saturday, May 12, no matter how small, will help our neighbors who are struggling just to put food on their tables.”

Food insecurity is a state in which people do not get enough food on a consistent basis to provide the nutrients for active and healthy lives. It can result from the recurrent lack of access to food. More than 300,000 Long Islanders face the risk of hunger every day, according to Island Harvest Food Bank and Feeding America®, a national hunger-relief organization. Those facing hunger include adults (often working two jobs), children, senior citizens, and veterans. Unable to make ends meet, they (and their children) are often forced to go without food. Approximately 70,000 individuals seek food assistance in Nassau and Suffolk counties each week through soup kitchens, food pantries and other feeding programs served by Island Harvest Food Bank.

Island Harvest Food Bank is a leading hunger-relief organization that provides food and other resources to people in need. Always treating those it helps with dignity and respect, its goal is to end hunger and reduce food waste on Long Island through efficient food collection and distribution; enhanced hunger-awareness and nutrition-education programs; job training; and direct services targeted at children, senior citizens, veterans, and others at risk of food insecurity.

As a result of Island Harvest Food Bank’s dynamic business model, more than 94 percent of expended resources go directly to programs and services that support more than 300,000 Long Islanders facing hunger. Island Harvest Food Bank is a lead agency in the region’s emergency response preparedness for food and product distribution, and is a member of Feeding America®, the nation’s leading domestic hunger-relief organization.