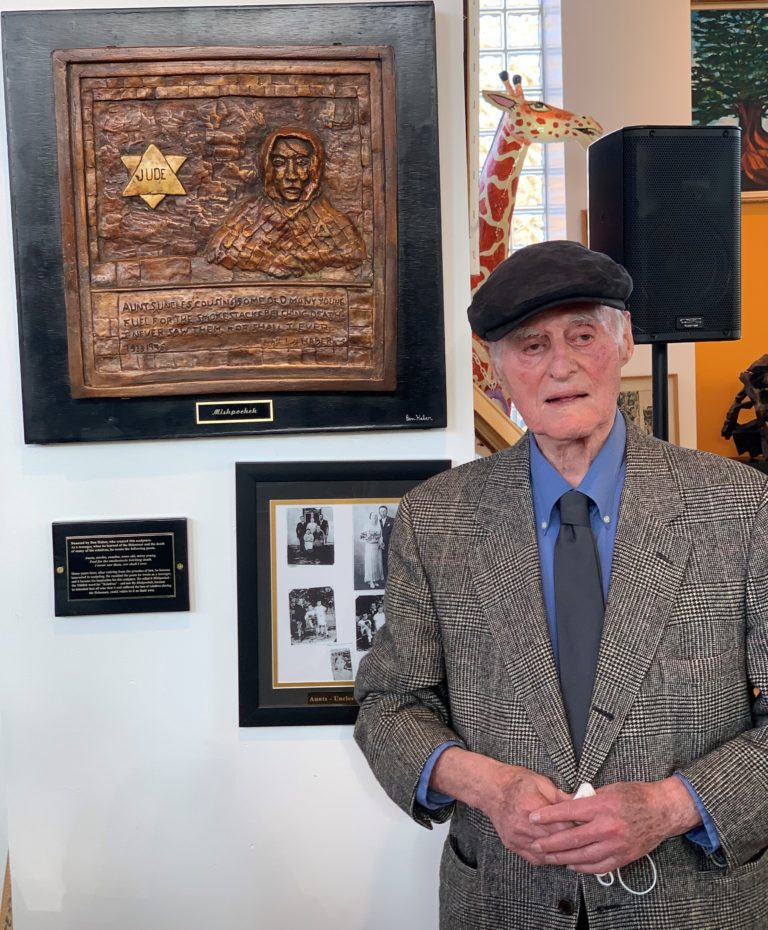 A gift of a magnificent piece of art by sculptor Ben Haber was made recently to the Irving Roth Holocaust Resource Center at Temple Judea. The work, titled “Mishpocheh,” the Yiddish word for relatives, was unveiled at a special dedication ceremony.

The artist, Ben Haber, explained to those who had gathered for the event, “I intended all who looked at it could relate to it as their own Holocaust relatives, be they Jewish, other religions, physically or mentally impaired persons, gay people, and those politically opposed to the Nazis. I believe the sensitivity of the sculpture confronts the ugliness of the Holocaust.”

The Irving Roth Resource Center, which is located in Temple Judea of Manhasset, is one of the very few Holocaust Resource Centers in the United States within a synagogue.

Haber, 93, began sculpting at age 72 after retiring from the practice of law. He found his inspiration for the piece from the following poem he wrote as a teenager, when he learned that his entire family in Europe had been murdered by the Nazis:
“Aunts, uncles, cousins, some old many young
Fuel for the smokestacks belching death
I never saw them, nor shall I ever.”
The poem remained in a drawer for over 50 years and became the inspiration for the art, which took eight months to complete. The sculpture, which had previously been loaned to other local museums and Holocaust Centers, has been permanently gifted to the Irving Roth Holocaust Center at Temple Judea.

Haber dedicated the gift to the memory of his late brother, Irving Haber, who was a member of Temple Judea. His nephew, who became Bar Mitzvah at Temple Judea long ago, had the honor of revealing the sculpture to the visibly moved audience.

The ceremony began with a welcome by Rabbi Todd Chizner, who described the history of the Holocaust Resource Center. He paid tribute to Irving Roth, a Holocaust survivor, who served as the Center’s original director for over 20 years until his death in February 2021.

The new director is Lauren Resnikoff, who also serves as Temple Judea’s education director. Ms. Resnikoff addressed the audience, thanking Haber and his wife, Ethyl. She explained how Haber’s sculpture will bring a new and unique perspective to the Center’s education resources.

All in attendance had the opportunity to view Mr. Haber’s sculpture as well as tour the Center to view the many meaningful exhibits dedicated to educating young and old on the evils of prejudice, to teach the lessons of the Holocaust, and to combat ignorance, hatred, and violence.
As a closing testimonial to the six million innocent Jewish souls who lost their lives in the Holocaust, Haber, in a very moving moment, recited Kaddish, the traditional Jewish prayer that is said as we remember those who have died. A quiet “Amen” was heard throughout the room.

The Irving Roth Holocaust Resource Center at Temple Judea is open to all by appointment. Please contact the Temple Office to make arrangements to visit. School programs are available both in-person and on Zoom.