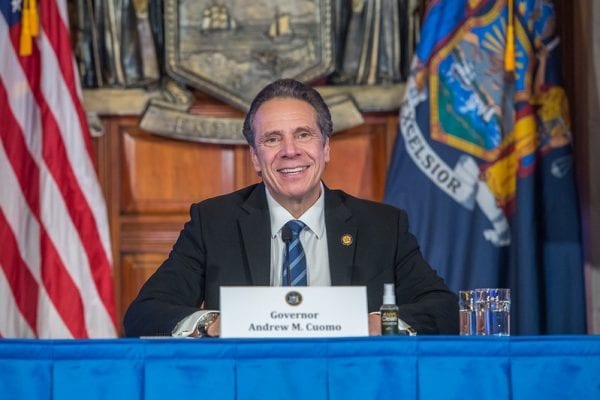 Gov. Andrew Cuomo said he should have "prioritized providing more information" of coronavirus-related deaths in nursing homes to federal officials.(Photo courtesy of the governor's office)

New York’s Senate majority leader is the latest Democratic official to call for Gov. Andrew Cuomo to resign amid investigations into alleged sexual harassment and into the state’s counting of nursing home deaths due to COVID-19.

“Every day there is another account that is drawing away from the business of government,” Senate Majority Leader Andrea Stewart-Cousins (D-Yonkers) said in a statement. “New York is still in the midst of this pandemic and is still facing the societal, health and economic impacts of it. We need to govern without daily distraction. For the good of the state Governor Cuomo must resign.”

U.S. Rep. Kathleen Rice (D-Garden City) was one of the first local officials to call on Cuomo to resign after reports that the state had withheld a full accounting of nursing home deaths and that the governor had been accused of sexual harassment.

“The accused is still trying to control this process,” Rice tweeted last week. “The time has come. The Governor must resign.”

“The newest claims of sexual harassment by the Governor continue to be deeply troubling and demand an independent and thorough investigation by the Attorney General,” Suozzi said. “It is best to hear from all parties in a formal process and then determine what next steps should be taken.”

“New York State’s Attorney General will be responsible for the investigation into the troubling allegations against Governor Cuomo,” Lavine said regarding the nursing home investigation. “While there were some reactive calls for an inquiry to be conducted by the legislature, I have full confidence in our [Attorney General].”

Assemblyman Ed Ra (R-Franklin Square) cited the allegations and investigations into Cuomo and his administration as a reason to dismiss a bill extending his emergency powers.

“The fact that Democrats would extend the governor’s existing orders indefinitely at a time when he’s under investigation for sexual harassment and obstruction of justice is just unfathomable to me,” Ra said. “We should be doing much more to empower local leaders to make important decisions for the communities they know so well, especially regarding vaccine distribution.”

Cuomo, along with top aides in his administration, reportedly withheld last year the total number of nursing home patients who died as a result of the coronavirus, according to multiple reports.

Investigative reports from The Wall Street Journal and The New York Times cited documents and interviews with six people who had “direct knowledge” of discussions with Cuomo and state health officials surrounding the numbers.

More than 9,000 nursing home residents in New York had died from coronavirus, according to a draft report last July from the state’s Department of Health, according to the articles.

But Cuomo and some of his top aides, including Secretary to the Governor Melissa DeRosa, allegedly urged Health Department officials to omit the total figures so that the report would only show residents who physically died in a nursing home, rather than nursing home residents who were transported to a local hospital and died there. According to The Times, the 9,000 figure was dropped.

In January, James announced that an investigation into the Health Department revealed coronavirus deaths of nursing home residents had been undercounted.

James said in a statement on Jan. 28 that her office had been investigating nursing homes throughout the state “based on allegations of patient neglect and other concerning conduct that may have jeopardized the health and safety of residents and employees,” received as early as March 2020 and numbering more than 900 since November. More than 20 nursing homes were under investigation as a result, according to James.

“As the pandemic and our investigations continue, it is imperative that we understand why the residents of nursing homes in New York unnecessarily suffered at such an alarming rate,” James said. “While we cannot bring back the individuals we lost to this crisis, this report seeks to offer transparency that the public deserves and to spur increased action to protect our most vulnerable residents.”

The initial investigations conducted by James’ office indicated that a larger number of nursing home residents died from the coronavirus than reported by the state’s Department of Health. Based on a survey of 62 nursing homes that found the state undercounted the fatalities there by an average of 56 percent, the data could push the department’s original count of 8,711 coronavirus-related deaths in nursing homes to more than 13,000, according to the report.

Investigations also showed that the lack of compliance in nursing homes with infection control protocols put residents at increased risk of harm, and facilities that had lower pre-pandemic staffing rating had higher coronavirus-related fatality rates.

After the investigation’s preliminary findings were publicized, the state came out with new data that showed an additional 3,800 coronavirus-related deaths of nursing home residents had occurred in hospitals.

The situation escalated when DeRosa told state lawmakers in a private phone conversation that the state delayed providing officials with updated statistics after former President Donald Trump’s Department of Justice sent an inquiry regarding coronavirus-related deaths in nursing homes.

“Basically we froze because then we were in a position where we weren’t sure if what we were going to give to the Department of Justice or what we give to you guys, what we start saying was going to be used against us,” DeRosa said on the call.

DeRosa later clarified her quote to state legislators in a statement.

“I was explaining that when we received the DOJ inquiry, we needed to temporarily set aside the Legislature’s request to deal with the federal request first,” she said. “We were comprehensive and transparent in our responses to the DOJ, and then had to immediately focus our resources on the second wave and vaccine rollout.”

The findings by The Journal and The Times were the latest blows to Cuomo’s credibility and popularity throughout the state.

Three women, including a pair of Cuomo’s former aides, have accused the governor of sexual harassment or misconduct.

The first allegation came from Lindsey Boylan, an employee of the state’s economic development agency beginning in 2015. Boylan said her first encounter with Cuomo occurred at Madison Square Garden to promote a Penn Station expansion project.

Boylan said the next day her boss told her Cuomo had a crush on her, which she described as “an uncomfortable but all-too-familiar feeling.” Boylan went on to describe her complaints to friends about how Cuomo allegedly touched her lower back, arms and legs.

Cuomo allegedly kissed Boylan on the lips in his Manhattan office in 2018, when she was promoted to deputy secretary for economic development and special adviser to Cuomo.  After that, she said, her fears of going to work each day made her more and more nauseous, and other female senior advisers reportedly “grew hostile” after she began speaking up for herself. Boylan said she announced her resignation from the state government in an email to staff members on Sept. 26, 2018.

“There is a part of me that will never forgive myself for being a victim for so long, for trying to ignore behavior that I knew was wrong,” Boylan said. “The Governor exploited my weaknesses, my desire to do good work and to be respected. I was made to believe this was the world I needed to survive in.”

Charlotte Bennett, a former executive assistant and health policy adviser in Cuomo’s administration, told The Times that the governor harassed her during the late spring of last year. The 25-year-old told the newspaper that in June, Cuomo asked her numerous questions regarding her personal life and if age played a role in romantic relationships, along with saying he was “open” to relationships with women in their 20s, around 40 years younger than him.

“I understood that the governor wanted to sleep with me, and felt horribly uncomfortable and scared,” Bennett told The Times. “And was wondering how I was going to get out of it and assumed it was the end of my job.”

Bennett, who was first hired by the state in 2019, left last fall, according to The Times.

Cuomo’s office claimed Boylan’s accusations were untrue, but James has launched an investigation into the allegations. Cuomo said he expressed good-natured teasing toward his employees but never intended to cause any harm.

“I now understand that my interactions may have been insensitive or too personal and that some of my comments, given my position, made others feel in ways I never intended,” Cuomo said. “To be clear I never inappropriately touched anybody and I never propositioned anybody and I never intended to make anyone feel uncomfortable, but these are allegations that New Yorkers deserve answers to.”

The third woman, Anna Rauch, said Cuomo made sexual advances during a 2019 wedding, according to multiple reports. The Times posted a picture of Cuomo grabbing Rauch’s face with both of his hands during the event. 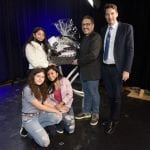 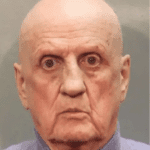 Ex-doctor charged with five counts of murder for painkiller practices