Over 500 museum supporters and attendees came out to celebrate this year’s award recipients at the 16th Annual Air & Space Gala at the Cradle of Aviation Museum on Wednesday, Nov. 7. 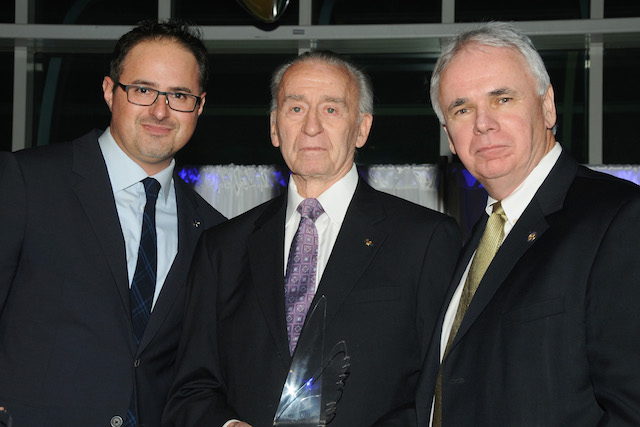 Cunningham was moved by the evening’s honorary bagpipe ceremony performed by the Nassau County Police Emerald Society Pipe Band. He said, “I cannot listen to that at my age without getting tears in my eyes. Thank you. Actually it’s an honor to be here at one the of what I believe to be one of the better museums we have in the world. My only disappointment is that they never did let me fly that F-11-1 up there,” referring to the Tiger plane hanging from the museum’s lobby formerly flown by the Blue Angels.

Cunningham discussed the program and the risk after the fatal fire of the Apollo 1 mission instantly killing astronauts Gus Grissom, Ed White, and Roger Chaffee. “Many people asked me, ‘Were you afraid?’ And I have to tell you, ‘No, we were not afraid.’ And that’s the honest truth. But that does not mean we were unable or unaware of the risks that were involved. We thought rightly or wrongly we thought we could overcome all the obstacles and that our goal was worth the risk.”

Cunningham further referenced how the astronauts and all of the thousands of people working on the mission were all of the same mindset, saying, “If this mission fails, it won’t fail because of me.“ He added, “They were not there for the fun of it, nor for notoriety… certainly not for money,” noting that he once calculated that the money he earned on the 11 days of the Apollo 7 mission equaled out to less than $660.

Cunningham remarked that those who fly to space over time are highly motivated to get the job done and a commitment to make every mission a success. He characterized the early Apollo missions as the “Five Steps to Land Man” on the Moon with Apollo 7’s mission being to test the Land the Command Module.

NASA and historians however will always refer to that mission as the longest, most ambitious and 101 percent perfect and successful mission leading to the greatest accomplishment of the 20th century. He referenced Magellan and the early explorers from 500 years ago who were willing to die for their efforts of circling the globe.

In closing, Cunningham acknowledged the astronauts of the Apollo program who were willing to make the sacrifice to our country and the service to history citing that some people did not make it and some people are no longer with us. “I was fortunate to be a brief part of the opportunity to fly harder, farther, faster on a mission to inspire future greatness,” Cunningham said. 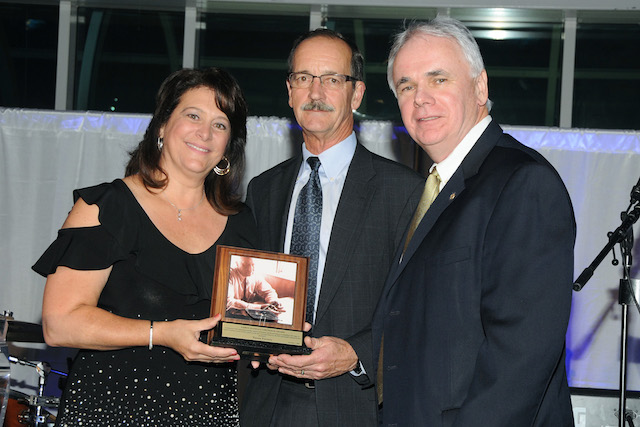 Ferraro, who was honored with the Leroy Grumman Award, said: “It is with deep gratitude and thanks to the Cradle of Aviation and its Board for this award… 35 years ago at the start of my career, I could not imagine standing here accepting this prestigious award that not only honors East/West (Industries) but honors the legacy of Leroy Grumman. I am truly honored to be standing in the shadow of such a great man.”

East/West Industries is a family-owned small business that was founded in 1968 by Ferraro’s parents, Dom and Mary Spinosa, and is located in Ronkonkoma.

Morse received the Aviation Leadership Award. Since co-founding MCR Development in 2006, he has led the company to its position as the seventh largest hotel owner/operator in the United States, with $2 billion in assets. 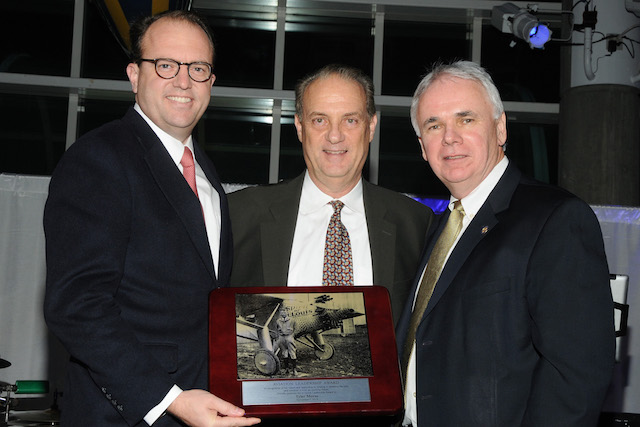 Morse said how thrilled he was to be part of the aviation community, having previously been part of the real estate development and hotel businesses. He referenced JFK’s speech about putting a man on the moon by end of decade and the spirit of jet aviation with the country looking skyward and acknowledged the ethos and spirit of the 60s.

“This is an incredible museum and The Cradle of Aviation does a wonderful job of bringing together the aviation community in such wonderful ways to celebrate the greatness of aviation,” Morse said.

The Cradle of Aviation Museum and Education Center is home to over 75 planes and spacecraft representing over 100 years of aviation history and Long Island’s only Giant Screen Dome Theater.  Currently, the museum is celebrating  “Countdown to Apollo at 50” sponsored by the Robert D.L. Gardiner Foundation, showcasing Long Island and Grumman’s significant role in the Apollo program.