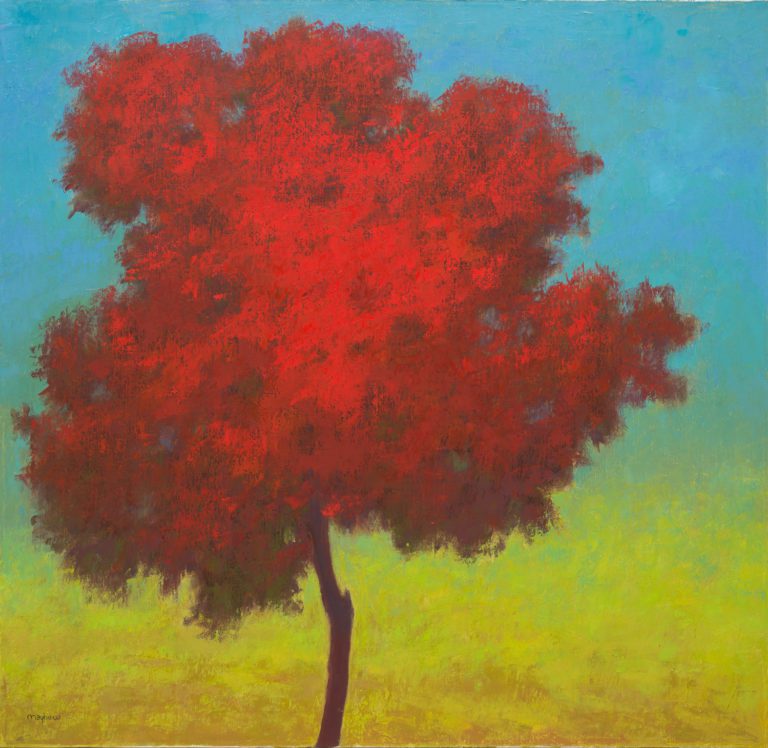 The Heckscher Museum of Art will
feature the work of artist Richard Mayhew (b. 1924, Long
Island, NY) in a solo exhibition, the first-ever organized so
close to Amityville, where the renowned artist grew up.

Richard Mayhew: Reinventing Landscape will be on view
from January 20 through April 24, 2022.

The exhibition will highlight more than two dozen vibrant
paintings and works on paper created by the artist over the
past six decades.

The exhibition is drawn from private collections
and institutions such as Hudson River Museum, National Academy of Design, and the Petrucci Family Foundation Collection of African-American Art. (Image above: Richard Mayhew, Jazz Solo II, 1988, oil on linen canvas. Courtesy of the Petrucci Family Foundation Collection of African-American Art. (c) 2021 Richard Mayhew; Courtesy ACA Galleries, New York)
Coinciding with the exhibition, The Heckscher Museum announces the acquisition of one of Mayhew’s vivid paintings, Pescadero, 2014. The Museum already holds a number of Mayhew’s lithographs. “The purchase of Richard Mayhew’s Pescadero is an important springboard into the Museum’s second century,” said Curator Karli Wurzelbacher. “We are honored to have the opportunity to share the stunning and thoughtful work of this major artist with our audiences, both now and in the decades to come.

Mayhew’s work will allow us to tell a more complete and compelling story about
the histories of abstraction and landscape painting in America.”
Richard Mayhew’s paintings express his African American and Native American heritage. “It’s a dual commitment to nature. The land is very important to both cultures, in terms of stimulation and spiritual sensitivity, and it’s very important to me,” he said. The Heckscher Museum, located less than 15 miles
from the artist’s birthplace, will introduce people from Long Island and the greater New York metropolitan region to Mayhew’s art within the context of Long Island’s diverse cultural history. Wurzelbacher notes that the artist’s subjects may suggest the appearance of natural forms, but they are symbolic only of his emotional interpretation. He conceives his painting as “mindscapes.”

Mayhew intuitively uses evocative color and diffused form to explore, in his words, “desire, ambition, love, hate, fear—that’s my painting.”
Although Mayhew has resided in other parts of the country (currently in Santa Cruz, CA), his place of birth remains at the center of his work.
Here, his love of nature and artistic talents were first stimulated. He took from the Long
Island landscape a life-long response to the spiritual essences of nature and delved into
complex emotions that permeate his canvases.
Richard Mayhew grew up in Amityville, on Long Island’s South Shore. It is among the oldest Black-Indigenous communities on Long Island.
During the 1930s and 40s, artists visited the area in the summertime to paint en plein air along the ocean coastline, and the young Mayhew would watch them: “I was fascinated by the artists dipping their brushes into the paint like a magic wand; the beautiful images that came out on the end of it were amazing.”
Following military service in the South Pacific, Mayhew spent time as an illustrator, ceramic painter, and a jazz singer. In 1951, he began courses at the Brooklyn Museum School of Art. A degree in art history from Columbia University added to his framework of artistic reference.

Studies in Europe fostered deeper appreciation of the old masters and for the Impressionists’ mastery of light. Mayhew’s first solo exhibition was organized by the Brooklyn Museum.

During the Civil Rights movement, he joined Spiral, formed in 1963 by a group of Black artists who met to discuss the relationships between Black identity,
American culture, and politics. These debates solidified his commitment to working in an abstract style while also engaging with concepts of race and social justice.

RELATED PROGRAMS
Panel on Environmental Justice on Long Island April 5, 2022, 5:30 pm
A virtual panel discussion with Jeremy Dennis, a contemporary fine art photographer, tribal member of the Shinnecock Indian Nation, and founder of Ma’s House, and Dr. Mark Chambers, Professor of Africana Studies at Stony Brook University. The panel will discuss Mayhew’s work and the intersections of environmentalism and racial justice on Long Island. Organized by Justyce Bennett, M.A., Curatorial Assistant, The Heckscher Museum of Art.
ALSO ON VIEW
Moonstruck: Lunar Art from the Collection
January 20 to September 18, 2022
From the nineteenth century to the present, artists have gravitated to the moon for reasons scientific, mythic, and symbolic. Drawn from the Museum’s Collection, this exhibition features a broad range of artwork that explore the enduring fascination with the moon in all its phases.