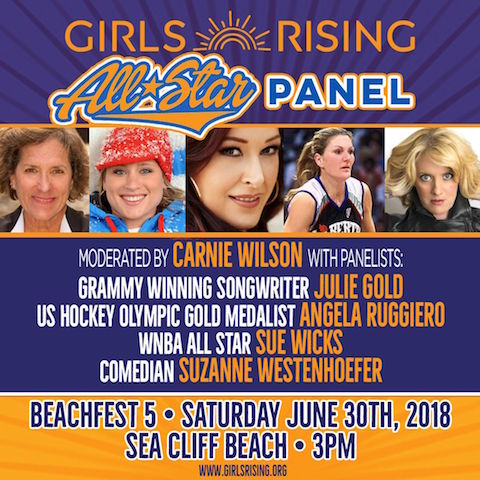 BeachFest is back — a bit earlier this year — and promises more fun in the sun at the Sea Cliff Beach Pavilion, where female musicians, artists, students, and the whole community gather each year for a good cause.

Started by the all-female, alt-country and rock band, Antigone Rising, the fifth annual BeachFest will take place on Saturday, June 30, from noon to 10 p.m., with a full day of music, children’s activities, and a panel discussion all to support the band’s non-profit, Girls Rising, an organization that inspires and empowers young girls.

Kristen Ellis-Henderson, one of the founding members of Antigone Rising, took time for an interview to discuss the charity and what people can expect at this year’s BeachFest, which is being held for the first time in June.

“A big part of the event is getting kids to participate and to perform,” Ellis-Henderson said about moving the festival from its usual month in September when there is a short window of time to plan since children are just returning from summer vacations and heading back to school. “So we decided let’s kick off summer instead of kicking off fall.”

Something else that’s new this year are Girls Rising grants that will be awarded to three Long Island students who have benefited from Girls Rising outreach programs over the past year.

“The idea behind these grants is that women need to help each other,” Ellis-Henderson said. “The only way to get more women to the top of the ladder is to keep pulling each other up the ladder. For us, it’s important to reach out a hand and pull these girls up.”

“So we asked local teachers and administrators to submit names of students they believed presented leadership qualities, contributed to their school community, and have been impacted by the outreach,” she added.

At the same time, Ellis-Henderson ran into Melissa Etheridge at an awards ceremony, and her fellow bandmates spoke to Joan Jett at a wedding, and both music legends agreed to support the grants.

So at this year’s BeachFest fundraiser, which is being held the night before the festival, on Friday, June 29, from 7 to 10 p.m., at the Glenwood Landing Firehouse, Allaina and Alina James, two 8th grade twin girls from the Finley Middle School in Glen Cove, will each receive a $500 grant. 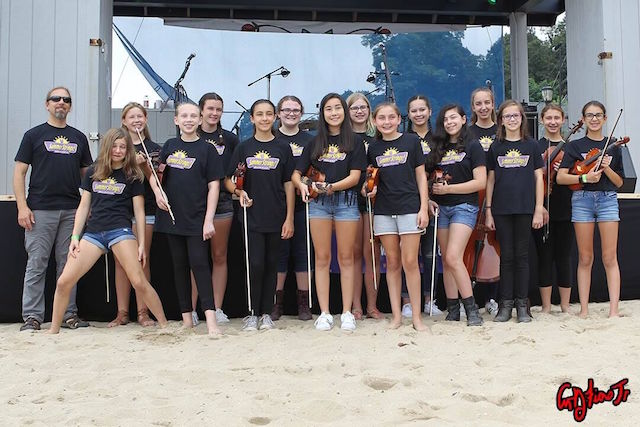 “Melissa has her own set of twins so she just loved the idea of the grants going to these two girls,” Ellis-Henderson said, adding that Long Beach, Long Island native Joan Jett is happy to be supporting a local student.

Lia Serravalle, a 4th grade student from the Sea Cliff Elementary School will receive the Sue Wicks Girls Rising Grant, named after the WNBA All Star who participates in many Girls Rising outreach programs.

“These three grants will continue to be given out annually to deserving students who benefit from Girls Rising,” Ellis-Henderson said.

Also at the Friday evening fundraiser, a Girls Rising Game Changer Award will be presented to Grammy-nominated artist and talk show host Carnie Wilson, best known as a member of the pop group Wilson Phillips.

“We’ve known Carnie for a few years,” said Ellis-Henderson, who first met Wilson at the Borgata Hotel in Las Vegas where both of their bands were playing. “Carnie knew all about our work through a mutual friend so she was like, ‘Where do you need me and when? I’m coming to BeachFest.'”

Once she became involved, Wilson’s participation went from sitting in on Saturday’s All-Star Girls Rising Outreach Panel that takes place every year, to moderating the panel, to receiving a Girls Rising Game Changer Award on Friday night for work she has done to empower and inspire women.

Presenting this award will be Grammy Award-winning songwriter Julie Gold, who remembers Wilson from the night she won her Grammy for the Bette Midler hit, “From a Distance,” in 1991. Wilson Phillips was also up for Best Song that year for “Hold On.” As their names were announced at the awards ceremony, Wilson and Gold made eye contact and Wilson lipped the words “good luck” while giving Gold a big smile and two thumbs up.

“Gold always wanted to find Carnie and thank her for that moment,” Ellis-Henderson said, because she said it settled and calmed her right before she accepted her Grammy.

“‘She’s the most gracious person and it would be my honor to present her with the award,'” Ellis-Henderson quoted Gold saying. 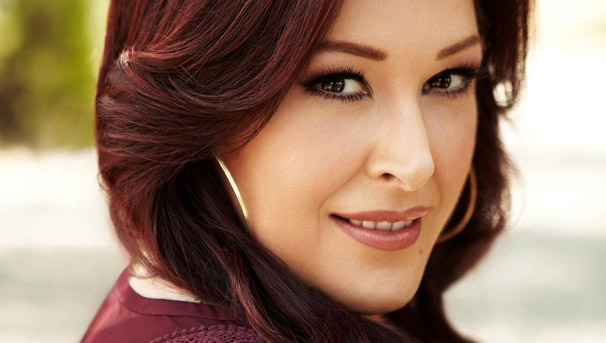 In addition to Wilson, this year’s All Star Girls Rising Outreach Panel that will take place on the Main Stage at the Beach Pavilion at 3 p.m. on Saturday includes Gold and Wicks, as well as U.S. Hockey Gold Medalist Angela Ruggiero and comedian Suzanne Westenhoefer, who will MC the entire BeachFest weekend.

“All these women from different careers, they come up and talk about their experiences as women and how they rose to the top of their careers in various ways,” Ellis-Henderson said.

In recent years, Girls Rising panel discussions have taken place at schools, universities, community centers, refugee camps, embassies and corporations across the globe and aim to demonstrate to girls that strong women exist and have much to contribute to art, culture, sports, finance, business and the world around them.

It was a trip to the Middle East sponsored by the U.S. State Department to coincide with Women’s History Month in March of 2012 that Antigone Rising came up with the idea for Girls Rising.

“They asked us to do outreach workshops, talking about what it’s like to be an all-female rock band in the U.S. and the experiences we’ve had as women in a non-traditional career,” Ellis-Henderson said.

So the band went to Israel and Palestine and spoke to children who were in disbelief seeing the all-female band, especially in the West Bank.

“It was like Beatlemania,” Ellis-Henderson recalled, describing the experience as life-altering and the epiphany to start their own charity back home to elevate American girls to reach their full potential.

So the band started doing similar outreach workshops here in the U.S. and Girls Rising and BeachFest, modeled after Florida’s annual 30A Songwriter’s Festival, were born.

The 30A Songwriter’s Festival hosts musicians and artists who perform at coffeehouses, theaters, clothing stores and other local businesses along the Gulf Coast on highway 30A. 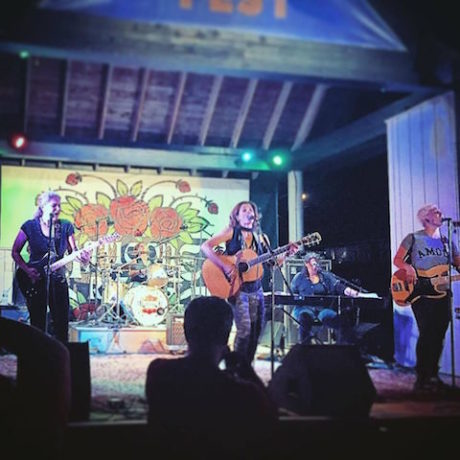 The idea of multiple artists performing while scattered all around the area led Antigone Rising to want to do the same thing in their own little beach town of Sea Cliff.

“We wanted to get people to come to see our hometown that we love so much,” she said. “It’s off the beaten path, so if we threw our own festival and invited our artist friends they could see where we lived. They could see how cool our town is.”

BeachFest now draws roughly 4,000 people to the Sea Cliff beachfront over the course of the day and offers something for everyone.

“There will be a ton of kids’ activities on the beach this time,” Ellis-Henderson said, including kids’ yoga, RADD CrossFit, scavenger hunts, face painting, tie-dying, and the popular “kindie” rock band for children, Joanie Leeds of Brooklyn, all starting at 12 p.m.

There will also be plenty of music throughout the day on the KIDZ BOP Youth Stage and into the evening on the Main Stage, with scheduled performances by Sinclair, the Sweet Lizzy Project, and founders Antigone Rising closing out the night.

With so much effort put into Girls Rising and BeachFest, Ellis-Henderson laughed when asked about Antigone Rising. “That’s right, we have a band, right?”

She admits that the charity now drives the group’s music career. “It’s like, well we’re doing outreach in North Carolina, so we might as well do some concert dates while we’re there,” she said.

So the band that formed at Bucknell University and went on to tour alongside the Rolling Stones, Aerosmith, the Allman Brothers Band, and many other headline performers over the years is still making music, but their priority is the global work of Girls Rising and the festival that supports its mission and programs.

“That what it’s turned into,” Ellis-Henderson said. “And that’s fine, we’re happy about it. That’s what we want.”

The Sea Cliff Beach Pavilion is located at 36 The Blvd. in Sea Cliff. The event is free and open to the general public, with a suggested donation at the entrance.

For more information about the BeachFest and Antigone Rising, go to www.antigonerising.com.