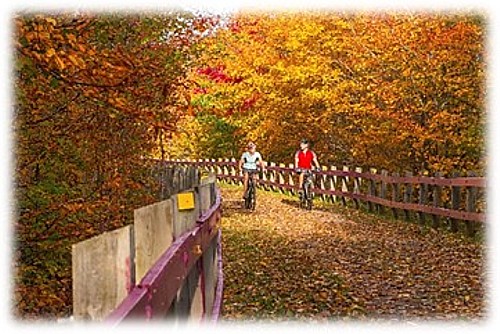 ATLANTIC CANADA  – As summer gives way to crisp autumn air, the Canadian provinces of New Brunswick, Newfoundland and Labrador, Nova Scotia, and Prince Edward Island offer more than breathtaking horizons of gold, crimson and amber leaves.  This fall, travelers to Atlantic Canada’s coastal region will find fewer crowds, lower rates and a variety of festivals, culinary indulgences and experiences that deliver more than simply peeping at leaves from a car.

For leaf peepers, the red clay roads on Prince Edward Island (www.tourismpei.com) are lined with trees full of apricot orange, fiery red and bright yellow and showcase best between mid-September and mid-October.  Bicycling on the Confederation Trail, which is built on old railroad tracks and spans about 270 miles (435 kilometers), offers spectacular views of colorful foliage with sections that lead through wooded areas and along the coastline.

With a famed heritage for its giant pumpkins, Windsor in  Nova Scotia ( www.novascotia.com) hosts the annual Pumpkin Festival and Regatta, where people paddle in hollowed out oversized pumpkins and race across Lake Pezaquid. With a backdrop of autumn leaves, spectators can cheer on the pumpkin racers, children can participate in scavenger hunts and so much more during the festivities on October 9.  For more information, visit http://worldsbiggestpumpkins.com

For nine days in October, Cape Breton Island is alive with music, activities and events celebrating the community’s rich culture during the annual Celtic Colours International Festival.  Held from October 6-14 when the leaves of Cape Breton are vibrant in red, yellow and orange hues, Celtic Colours has grown to become one of Canada’s premier musical events. At one of the many concerts, guests will be entertained by musicians from around the world sharing the stage with Cape Breton’s best singers, dancers, players, story-tellers and culture bearers in venues that range from community halls and churches to modern schools and theatres. For more information, visit http://celtic-colours.com/.

Foliage enthusiasts looking for an offbeat way to view fall colors can head to Newfoundland and Labrador (www.newfoundlandlabrador.com)and hop on an ATV.  In Western Newfoundland, Mount Musgrave ATV Tours travels along Marble Mountain’s jaw-dropping vistas of Humber Valley. The one and half hour tour brings ATVing guests beyond the chairlift to the summit of Mount Musgrave to spot wildlife such as moose, caribou, black bear, and of course, the vibrant hues of changing leaves. Available through October 31, price is $55 CAD per person.

Indulge, New Brunswick’s annual food and wine festival in St. Andrews by-the-Sea, features three days of food experiences and more from October 13 to 15. From a walking tour and tasting of top chefs’ wares along shorefront Water Street to a farmer’s market, tasting dinners and wine trails, guests enjoy local culinary delights.  On October 14, adventurists can race the tide across the ocean floor on bike during Cyclocross the Tide on Ministers Island.  Pricing for individual events vary.

In Miramichi, New Brunswick (www.tourismnewbrunswick.ca), the newly opened Over the Cove Zipline stretches more than 980 feet (300 meters). Adventurers can zip over water and through the changing colored leaves in two directions at French Fort Cove, which also offers walking, hiking and biking trails. Over the Cove Zipline is open weekends through October 9. Price is $20 CAD per person.