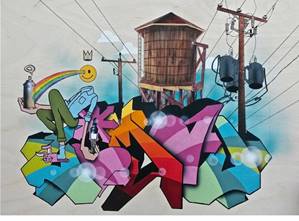 If you want to take in and enjoy urban art without stepping foot in the city, you are in luck. On May 20, the Gold Coast Arts Center is introducing a new exhibit, aptly called Urban Pop, featuring five well-known artists whose work incorporates graffiti, street art, architecture, and urban culture.

The artists featured in Urban Pop include Luis “Zimad” Lamboy and Shiro, whose controversial work appeared on the murals at 5Pointz, a warehouse complex and graffiti mecca in Queens. Their work, along with several other artists, was subsequently destroyed when whitewashed by the property owner and was the subject of a prolonged court battle, ultimately decided in favor of the artists, awarding them $6.75 million.

Other artists displaying include Michelle Carollo, Will Power, and Lenny Achan. Carollo, who conquers “one white wall at a time,” has exhibited at MOMA PS1. Power is a self-taught contemporary artist who was influenced by graffiti and hip-hop culture.  And Achan’s style reflects his experiences growing up in New York City as a graffiti and street artist in the early 1990s.

According to the Gold Coast Arts Center’s Gallery Director, Jude Amsel, these artists “bring a myriad of visual cultural influences to their fine art practice.  Some hone their skills on the street, others working in the studio find their version of popular urban art, some having a unique language of their own not categorized within a specific movement.  However, each one of the artists offers something unique and different as to their expression of Urban Pop.”

For more information about the exhibit and the Gold Coast Arts Center, visit www.goldcoastarts.org or call 516-829-2570.