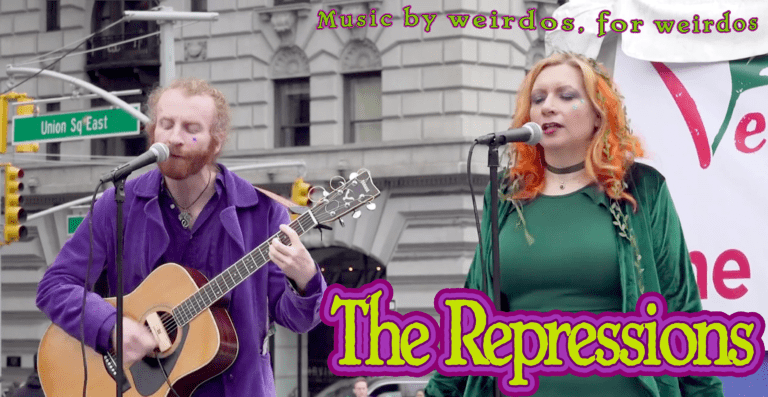 On Friday, July 26, the indie band The Repressions will be performing in Port Washington at the Dolphin Bookshop.

During this acoustic show, audience members can expect to see original artwork and comics in song title and lyric cards, occasional bubbles, and a box of prizes for everyone attending. They cover many styles of music with two acoustic guitars, a small xylophone, and two wide-ranging voices. The songs are thoughtful, honest and erudite, performed with melodic feeling and frenetic energy. 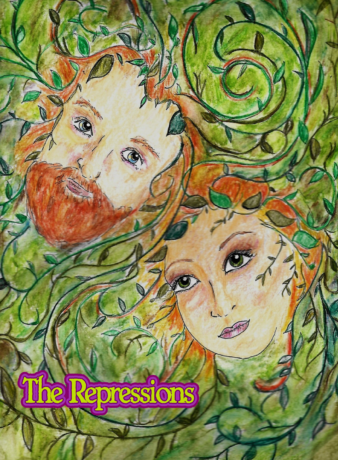 They promote a message to “lift your head up,” as they sing in their two minute funk showstopper “Whatever Happened to the Bookstore.” Books, nature, defending animals, injustice, being weird, and living with wild emotions are common themes in their songs. Their style has been described by audiences as radical folk-rock, ethereal indie rock, anti-bully music and a Saturday morning cartoon for adults. The band dedicates their music to anyone who has ever been made to feel small for being sensitive, kind, smart, or ill.

The Repressions play lively shows every month all over New York City, playing from the heart and hoping to make others feel better. They are very excited to play the Dolphin Bookshop and Cafe, especially as books and art are such an integral part of their music.

“I am very happy to be performing in my hometown at the Dolphin, this time with all new material and my band,” says Lay, who was formerly a solo artist and a regular at the local bookstore.

The performance begins at 7 p.m. and is free to attend. For more information on The Repressions and the band’s music, visit therepressions.com.