Perhaps it should come as no surprise that Nelson DeMille calls his writing studio Area 51, named after a restricted zone in the Southwest desert used by our military for covert purposes.

He is, after all, a New York Times bestselling author known for novels that combine crime, intrigue and his signature humor.

While DeMille’s version is also considered off limits (except for the cleaning lady, he says), his private space overlooks the picturesque, leafy village of Garden City, and the only conspiracies going on there are the ones he envisions for his thrilling stories.

With the release next week of his twentieth novel, “The Cuban Affair” on Sept. 19, a suspense set in another forbidden territory, Communist Cuba, the master storyteller took time for an interview in the place where his creative magic happens from the moment his pencil hits the page.

DeMille’s two-story office reflects his distinguished career that has spanned four decades. Here there are framed blow-ups of his bestselling book covers lining the corridors and bookshelves stocked with his novels and other classic tomes.

Also filling his shelves and writing table are photographs of family, fellow writers and other notable people he’s met over the years, including one with John Travolta on the set of the film adaptation of his seventh novel, “The General’s Daughter” (1992).

But what stands out the most in his office amongst all the mementos and accolades is a map of the world that takes up a whole wall, with markers pinned on all the cities he’s visited to research his novels. 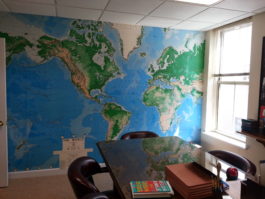 Not only a showpiece and great conversation piece, the mural is a handy tool of the trade for someone whose profession is to plot worldwide adventures.

And it is typically a specific part of the world — with its associated culture and conflicts – that is the driving force behind DeMille’s stories.

As far back as his first hardcover novel, “By the Rivers of Babylon” (1978), DeMille had a specific region in mind.

“I wanted to set something in the Middle East,” he said, “… and obviously we’re not talking about wine growing, we’re talking about terrorism, and the whole book took off from there.”

With his second novel, “Cathedral” (1981), DeMille wanted to write about the Irish Republican Army and St. Patrick’s Cathedral.  “I wanted to do New York City on St. Patrick’s Day… that was the concept.”

Once he has the core of an idea in place, “the plot will reveal itself and the characters will reveal themselves,” he explained.

DeMille’s subsequent novels are set in more hotbed locales, such as Russia and Yemen, yet the most personal and dangerous place he has stayed and written about is Vietnam, where he served as a lieutenant in the U.S. Army during the Vietnam War from 1966 to ‘69.

His novel, “Word of Honor” (1985), was based on his experiences in the war, and “Up Country” (2002) was inspired by his return to Vietnam in 1997 on the 29th anniversary of the Tet Offensive, one of the largest military campaigns of the Vietnam War.

“I had been there in ‘68 for the Tet Offensive, (so) the last time I saw this place it was ablaze, but now everybody’s at peace so, you know, it’s a whole different experience,” DeMille said.  “It was an emotional trip in many ways, (but) a good trip ultimately.”

While DeMille says he never wanted to become a Vietnam War novelist, “The Cuban Affair” revisits some of this terrain by introducing a new character, U.S. Army combat veteran Daniel “Mac” MacCormick. 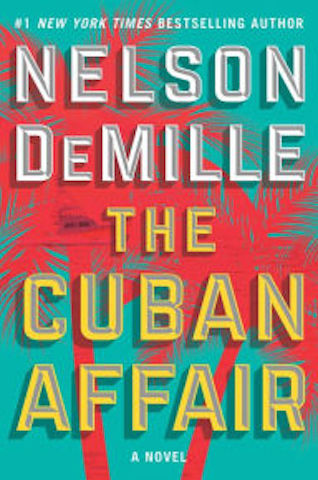 Mac is 35 years old and served two tours in Afghanistan, becoming a decorated war veteran with a quick wit, reminiscent of DeMille.  Now the captain of his own, 42-foot charter boat in Key West, Fla., Mac’s second mate is Jack Colby, a veteran of the Vietnam War — also like DeMille.

When asked about casting versions of himself in his stories and, in the case of “The Cuban Affair,” a famous novelist with a familiar-sounding name, DeMille says that it’s fun and “lightens it up a bit.”

It will take Mac’s military might and Colby’s navigational know-how to accomplish their next assignment on the high seas – a ten-day fishing tournament in Communist-ruled Cuba that lures Mac when he is first approached about the task at his favorite watering hole, Key West’s famous Green Parrot Bar.

Despite the dangers involved, Mac agrees to the job once he meets alluring, Cuban-American Sara Ortega and his bounty goes up to two million dollars after she reveals her secret mission – to recover the 60 million dollars her grandfather hid when he fled Fidel Castro’s revolution.

Mac and Ortega’s quest takes them through Havana’s districts, the cultural province of Matanzas, and the fisherman’s paradise, Cayo Guillermo, while dodging government informants and bullets, giving in to their passion amid the steamy nightlife and lush countryside, and exposing a dark chapter in Vietnam War history that involves Cuban rebels and outrunning gunboats to save their lives and precious cargo.

“I always wanted to write about Cuba for a variety of reasons,” DeMille said, recalling New Year’s Day in 1959 when his Uncle Fred, an NYPD detective, couldn’t join a family celebration because he was called to duty the morning after Castro’s rebel forces took hold of the island.

“And the Church in those days… the priests were very conservative — very 1950s — and they would rail against the Communists,” he said when describing Castro’s regime, leading up to the Cuban Missile Crisis in 1962. “I was in college at that time and everyone thought World War III was about to start.”

Even later, when he was in the Army, DeMille had two company commanders, captains who were both captured at the Bay of Pigs and released in the ransom program “where we gave the Cubans trucks and they let Bay of Pigs POWs go,” he said.

Remembering this era so vividly, DeMille said that Cuba, despite its strained relationship with the U.S., is part of his childhood, his generation and his history.

So when his son Alex, a Yale graduate, passed along an invitation to join a university-sponsored tour of the country, DeMille enlisted a close friend, a fellow Yale alum who was a college roommate of John Kerry, Secretary of State at the time, to not only accompany him on the trip along with their wives, but also to line up a meeting with the acting U.S. Ambassador to Cuba.

DeMille embarked on the tour in October 2015 on the heels of President Obama formally restoring U.S. diplomatic relations with Cuba in July of that year, a big step in the process known as the Cuban Thaw.

“I was a little apprehensive because it’s a police state. It doesn’t matter if it’s Communists or fascists, any police state is tricky,” DeMille said about the trip, with one major difference.

“I had been to Moscow and Leningrad (where) you knew you were in a police state,” he said, describing these bleak environments.

But in Havana, the culture is so much different.  “It’s kind of like Communism with rum and coke… (It) looks like any tropical paradise, but it’s not,” DeMille said when talking about the birthplace of mojitos and daiquiris that now has its locals living on rice and beans.

“You expect a city of two million people to be vibrant… it comes alive at night, but during the day I don’t know if it’s the heat or people just have nothing to do (but) the whole central city… is dead,” he said.

And many tourists don’t realize that most of the bars and restaurants in Cuba are government-controlled, DeMille added, because these places seem like a party with the fruity cocktails, Cuban music and dancing, and all of the tributes to American author Ernest Hemingway, including a lifelike, bronze replica of the literary icon seated at the bar in Havana’s historic Floridita restaurant and lounge.

DeMille got to see this statue of one of his favorite authors during his trip, as well as visit Finca Vigia, the hilltop villa east of Havana where Hemingway lived for more than two decades, from 1939 to 1960.

During these years, Hemingway spent his time fishing, meeting Castro on one occasion at a marlin fishing tournament, and writing “Islands in the Stream,” a sea-trilogy ending with a shoot-out in the channels of Cayo Guillermo that was posthumously published after his death in 1961.

Given the travel restrictions imposed on Americans, DeMille didn’t get to visit these outlying parts of Cuba and said he would like to go back one day – that is, if he isn’t banned for writing his Cuban caper.

“You can see it’s a big island, an amazing place, if you can just get in a car and travel the island,” DeMille said, noting that private money from Miami is coming into the country to restore certain areas.  “So it’s definitely a place in transition,” perhaps signaling a brighter future for the island nation.

When it comes to Mac, “The Cuban Affair” leaves him contemplating a return to his home state of Maine. “I can see Mac in Maine,” DeMille admits. “I can see Mac as a sequel; I can’t see it as a series.”

DeMille shared his thoughts on character series, saying “As much as I love Agatha Christie and Poirot books with Miss Marple, you say, ‘How can so much happen to one little old lady in a small village?’”

The same can be said for Mac, who may be better suited for the big screen, with “The Cuban Affair” currently making the rounds in Hollywood.

As for DeMille’s Long Island-set novels, the author who grew up in Elmont, graduated from Hofstra University, and has lived in Garden City since 1975, hasn’t forgotten his roots and local fans.

His beloved classic and personal favorite of his books, “The Gold Coast,” was recently reissued in paperback, with a stately new, white-and-gold cover, for a new generation of fans to enjoy.

Described by DeMille as “The Godfather” meets “The Great Gatsby,” the story about the North Shore’s old money colliding with the mafia barons of the 1980s became an instant success when published in 1990, ushering in more of DeMille’s bestsellers and earning him the distinction of being widely regarded as Long Island’s foremost author.

Nelson DeMille will participate in six events on Long Island this fall: