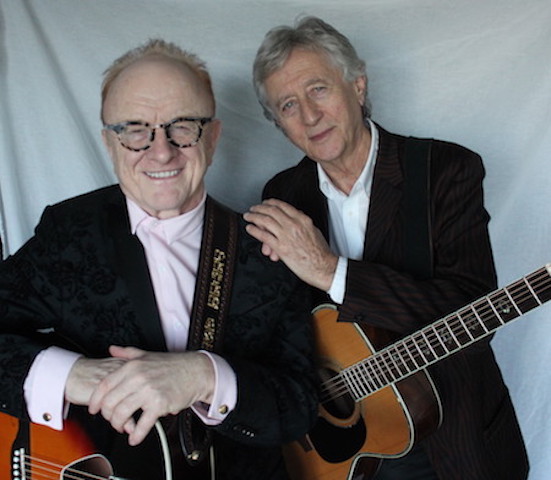 British guitarist and singer Peter Asher rose to prominence in the 1960s as a member of the pop music duo Peter & Gordon before moving on to becoming a Grammy-winning record producer and manager, representing people like James Taylor and Linda Ronstadt.

English actor and musician Jeremy Clyde, who also performed as one-half of a popular ’60s’ music duo, Chad & Jeremy, has achieved a long career on the screen, often playing upper-middle class or aristocratic characters on television (“Downton Abbey”) and in film (“The Iron Lady”).

Now Asher & Clyde will share the stage at My Father’s Place at the Roslyn Hotel, 1221 Old Northern Blvd. in Roslyn, on Saturday, Jan. 19 at 8 p.m., performing their combined 30 Billboard chart-toppers.

The Peter & Gordon songbook features hits such as “Woman,” “I Go to Pieces,” “I Don’t Want to See You Again,” “Lady Godiva,” and “A World Without Love,” while the Chad & Jeremy catalog includes the songs “Distant Shores,” “Yesterday’s Gone,” “Willow Weep for Me,” “Before and After,” and “A Summer Song.”

Don’t miss the opportunity to hear the stories behind the lives and music of these two legendary duos from the era that wiped clean and drew again the face of popular culture.