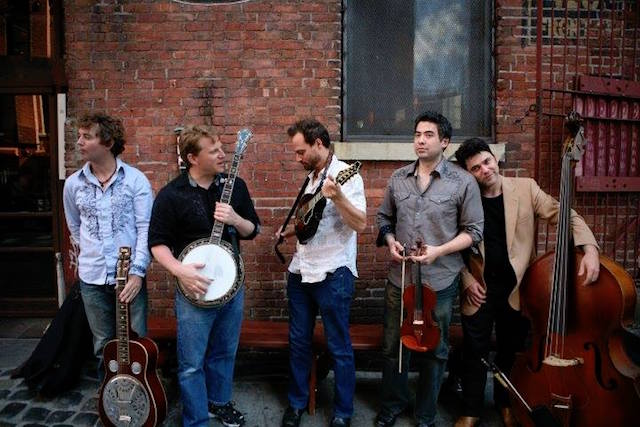 Combining the fiery fingers and squeaky clean harmonies of a traditional bluegrass outfit with the spontaneous energy of a jam band and the heart and soul of classic rock, the unmistakable sound of Citigrass has forged a unique niche and fervent following since arriving onto the New York City club scene ten years ago.

Specializing in what’s considered “urban bluegrass,” Citigrass blends rock, jazz and even classical influences with traditional bluegrass to create a modern sound that attracts a much wider audience than most bluegrass acts.

Citigrass has been praised by such diverse publications as Bluegrass Unlimited, Relix, The Village Voice, and the New York Press, and has received national radio exposure through the highly successful run of both “Serpent in the Grass” and their debut album, “Citigrass.”

Like a fine blended whiskey, Citigrass goes down smooth, featuring subtle notes of Celtic, old-time, bluegrass, rock, funk, disco, and beyond, creating a rich, complex body of work that leaves audiences from Maine to Alabama screaming for more.

As rendered by an all-star lineup of musical mavericks, there is simply no listening experience that can adequately prepare you for the intensity, irreverence, and full-on acoustic sound that is Citigrass.

A well-known favorite at popular venues and festivals, Citigrass has shared the stage with such acclaimed artists as Ricky Skaggs, Mike Gordon (Phish), and the Yonder Mountain String Band, and was recently the featured soloist with the Mobile Symphony Pops.

Citigrass has performed at Gracie Mansion for New York City Mayor Michael Bloomberg, and has become a regular first call act for city-run events at parks and public spaces.

The band’s music was featured in the Billy-Bob Thornton movie, “Astronaut Farmer,” and other short films. And they are repeat performers on ABC-TV’s “Live” morning show at Lincoln Center.

Now, the band that continues to receive critical acclaim from places as diverse as The New York Times and Jambands.com, will perform as part of Planting Fields Arboretum’s Music in the Garden series on Friday, Aug. 24 from 7 to 9 p.m.

Tickets are $20 to $30 and can be purchased by going to www.plantingfields.org. For more information about the upcoming outdoor show, call 516-922-8678.