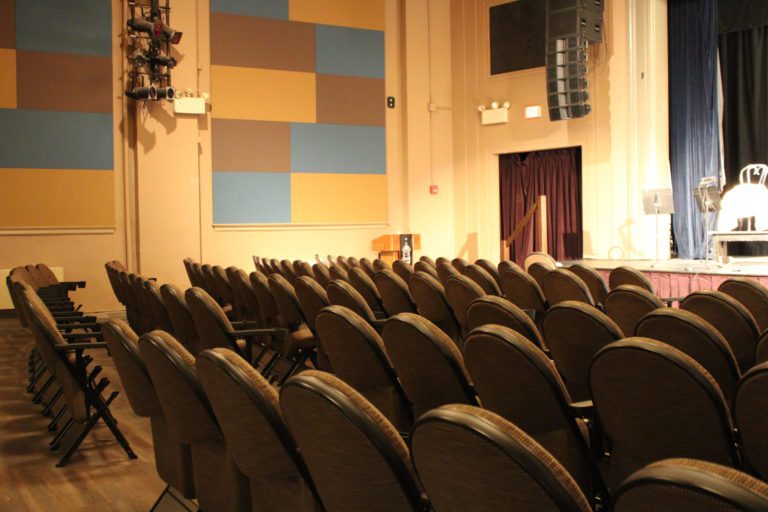 While the past two years have been difficult on the performing arts industry, Landmark on Main Street is pleased to share some good news. Landmark is excited to announce the completion of the first phase of renovations to the Jeanne Rimsky Theater.

The improvements, which were initially announced in May of 2021, represent the largest redesign that Landmark has undergone in its 26-year history. More upgrades are planned for the near future.

The front six rows of seats have been replaced with new seats which are larger and more comfortable. Importantly, the new seats are removable, allowing Landmark to open up the front area of the theatre for a variety of uses including General Admission shows.

State-of-the-art acoustic panels have been placed over the windows which improve the aesthetics of the theater and add to the Jeanne Rimsky Theater’s sound quality. New LED stage lights and two additional bars will be added later in the season.

The renovations come in time for the second half of the 2021/2022 season, which opens with Jarrod Spector & Kelli Barrett: Kings & Queens on Feb. 5 at 8 pm, and also will feature Lisa Fischer on February 11, Larry Campbell, Teresa Williams and Lucy Kaplansky on Feb. 12, and a Lunar New Year Celebration throughout the day on Feb. 13.

“The past two years have brought unprecedented difficulties to performing arts organizations and the communities they serve,” says Executive Director Richard Mayer, who joined Landmark in September of 2021. “Landmark is ready for a bright future. The theatre refresh has equipped Landmark to meet the changing needs of our community and to host a wider range of shows and events. Audiences can expect to see the new open area of the Jeanne Rimsky Theater used as a dance floor, for classes, and even for table seating for galas and fundraisers.”

The project was funded thanks to a $250,000 fundraising campaign led by Landmark’s Board of Directors in 2021. Russ Burman, co-chair of Landmark’s Development Committee which headed the efforts, says, “It’s very exciting to see Landmark’s new theater come to life. It gives tremendous flexibility for different types of performances, and I cannot thank our supporting donors enough for making this a reality.” Burman also credits the hard work of Landmark’s staff and board, saying, “The entire team was fantastic.”

Landmark on Main Street is a not-for-profit whose mission is to enhance the spirit and enrich the lives of the residents of Port Washington and the surrounding region by bringing the performing arts to the community and the community to the performing arts. After being closed for 18 months due to Covid-19, The Jeanne Rimsky Theater reopened in September 2021. Landmark presents over 75 world-class performances and community events each year: www.Landmarkonmainstreet.org

Our 2021-22 Season is made possible thanks to our Partners in Performing Arts: Peter & Jeri Dejana Family Foundation, Tri-State Cadillac Dealers, Harding Real Estate, Town of North Hempstead, and the Unitarian Universalist Congregation at Shelter Rock.