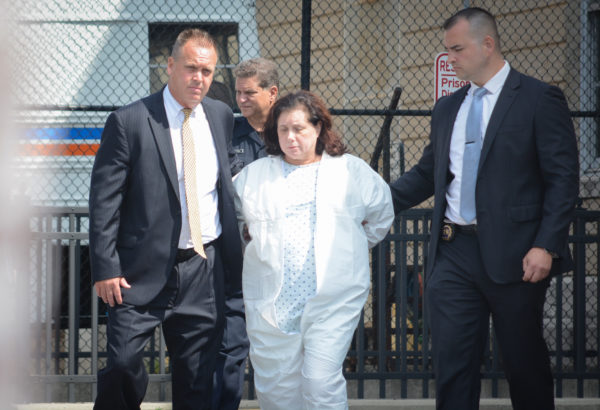 Faye Doomchin of Great Neck was found "not responsible by reason of mental disease" for fatally stabbing a woman in 2018, according to Newsday. (Photo by Janelle Clausen)

Acting State Supreme Court Justice Robert Bogle ruled on Wednesday that Great Neck native Faye Doomchin “was not responsible by reason of mental disease or defect” for fatally stabbing a British tourist in 2018, according to Newsday.

The 68-year-old Doomchin was charged with second-degree murder after she stabbed Denise Webster on Aug. 13, 2018, after the two women, who met for the first time that day, had lunch out.  The defense did not dispute that Doomchin carried out the stabbing, but said she was not criminally responsible because of mental disease.

Efforts to reach officials for comment on a potential course of action for Doomchin were unavailing.

The murder case was Long Island’s first criminal trial since the coronavirus pandemic forced court closures in March, according to officials.

Bogle said he believed the case was the first time a “hybrid criminal trial” that combined virtual and in-person testimonies took place in New York.  Officials said the use of virtual technology could also break further ground in the legal world.

On July 14, according to multiple reports, Doomchin listened via Skype to a psychologist testify about how she told him “the devil” was “jumping around from person to person” before she stabbed Webster, a 61-year-old tourist from England, in her Great Neck home.

According to Newsday, defense attorney Robert Gottlieb said during his closing argument, “There was no rational reason for Faye to have stabbed her,” referring to Webster. “Faye set out to destroy evil … the devil that she perceived to be right there in her living room.”

Prosecutor Martin Meany, according to Newsday, countered that Doomchin was aware that what she was doing was wrong when she thrust a kitchen knife into Webster’s stomach.

“There’s a difference between being strange and getting away with murder,” Meaney said. “And I submit to you, Judge, that’s what the defense is trying to do in this case – get away with murder.”

According to multiple reports, Bogle donned a face mask while presiding in a jury-less trial. On July 13, according to Newsday, Doomchin was present in court wearing a mask and face shield while sitting next to her attorney.

Doomchin wore a jail uniform the next day while she listened via Skype to testimony from forensic psychologist Chuck Denison and prosecution witness Mitchell Kessler, Newsday reported.

According to Denison, Doomchin told him during a psychological exam, “I remember just attacking,” Newsday reported.

Efforts to reach Gottlieb and court officials for comment were unavailing.

In an August 2018 arraignment, Assistant District Attorney Jared Rosenblatt said that Doomchin, who was brought out in handcuffs, had said she’d made a “terrible mistake,” she “meant to do a good thing,” and that “God should strike me dead.”

But, Rosenblatt said, the stabbing was likely motivated by “some sort of jealousy” because a male friend – not identified in court – was paying too much attention to someone “evil” in Doomchin’s eyes.

Rosenblatt also referred to a 1999 case in which Doomchin stabbed a woman twice in the back with a 10-inch kitchen knife in a “place of business” and recommended that, given the seriousness of the current case, Doomchin remain in custody.

Gottlieb said in that prior case his client, a recently retired legal secretary who has lived in Great Neck for 20 years, had always returned for court dates. That case ultimately showed Doomchin had schizoaffective disorder and that she was not responsible for the stabbing, Gottlieb said.

In addition to her regular treatment with a Great Neck-based psychiatrist, Gottlieb said Doomchin received outpatient psychiatric treatment for 10 years. That treatment was discontinued in 2011 after a finding from doctors, Gottlieb said, but Doomchin made sure to continue seeing her psychiatrist and take a number of medications in recognition of her illness.