The pardons will restore the right to vote for 24,086 people who have been released from prison and are living under community supervision.

Phillips, joined by Mineola Superintendent Michael Nagler and New Hyde Park-Garden City Park Superintendent Jennifer Morrison, as well as members of the Mineola Board of Education, said allowing convicted sex offenders to enter schools to vote could pose a threat to students.

They have a point.

We would give more credit to Phillips for raising this point if she had not joined her Republican colleagues in April in once again opposing the Child Victims Act.

Phillips said she needed more time to decide what to do.

As we pointed out, the state Legislature had debated this bill for 10 years during which time the state Assembly has approved the legislation five times.

Still, we are pleased that Phillips has now shown the ability to respond to a potential threat to children in less than 10 years.

At her news conference, Phillips demanded that the governor “act immediately to reverse this decision, and to immediately tell us his plans to keep our children safe.”

Not including, apparently, signing the Child Victims Act into law.

In announcing the pardons, Cuomo rightfully called the right to vote fundamental and said “it is unconscionable to deny that basic right of citizenship to New Yorkers who have paid their debt to society.”

He also pointed out that restrictions on voting have had a disproportionate impact on people of color with African-Americans and Hispanics comprising 71 percent of the population disenfranchised due to their parole status.

And that the restoration of the right to vote is linked to reduced recidivism.

In asking for Cuomo to reverse his decision, Phillips is asking to disenfranchise more than 24,000 people who have already paid their debt to society.

This may be good politics on Phillips part, but it is bad policy.

Especially when solutions to convicted sexual predators casting their ballots in schools are available.

In fact, the solutions would actually increase school safety and improve voter turnout.

The first solution is – don’t place polling places in schools.

The biggest threat to children in schools is not sexual predators; it is people with guns.

Schools have been investing valuable resources in recent years to protect children from an armed intruder, so why allow hundreds if not thousands of people not known to school officials to enter to vote?

It is worth noting that Phillips and other state Senate Republicans also opposed strong gun regulations in New York this year. Instead, they focused their efforts on making schools safer.

What other public locations could serve as a polling place? The answer is it depends.

The universe of places that could serve as a polling place would expand greatly with a simple election reform that would also have the benefit of increasing voter turnout — mail-based voting.

This system involves mailing a ballot to the home of all registered voters a few weeks before Election Day. Voters can then mail the ballot back or drop it off to a designated location — in this case, not a school.

Jurisdictions using this system have seen turnout up to seven points higher than expected.

The biggest obstacle to adopting this practice in New York may be that it works.

New York state has served as a model for voter suppression that Republican state legislatures aspire to. And its support has been bipartisan.

This helps explain why congressional primaries were held at an inconvenient time for most voters such as Tuesday, June 26 – the better to generate low turnout that favors political machines.

But as shown by the primary loss of Congressman Joe Crowley, the No. 4 Democrat in the House and the Queens County Democratic chairman, the times might be a changin’.

Encouraging more Americans to vote, including those who have paid their debt to society, and keeping school kids safe at the same time would be a good start.

From the Right: Silly season political antics
Next Article 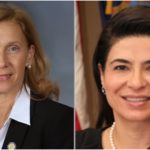