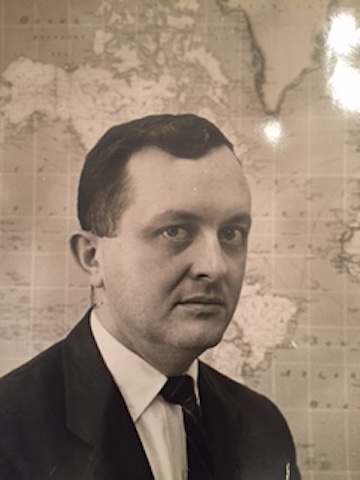 Philippe Y. Sanborne, a longtime reporter and editor for Newsday who grew up in Great Neck, died on Dec. 20. He was 88.
Sanborne died of pneumonia in Mount Lebanon, Pennsylvania, though he was also suffering with advanced Alzheimer’s, his daughter, Lynn Sanborne, said.
Sanborne said her father, who was known as “Phil,” was born in Little Neck, and his family moved to Great Neck when he was very young.
Phil Sanborne’s parents, she said, met in Bordeaux, where his father, Walter, was based during World War I. His mother, Yvonne, lived in Bordeaux.
“He was a gentlemen and it was raining and offered her his umbrella,” Sanborne said. “And the rest is history.”
The couple came to America, got married and had three children.
After graduating from high school, Phil Sanborne attended Hofstra University as a commuter student still living at home in Great Neck, Sanborne said.
She said her father served as editor of the Hofstra school newspaper and in 1950 began working for Newsday shortly before graduating that year.
Sanborne said her father was drafted into the Marine Corps during the Korean War, but because of his journalism experience, he secured a job as a “Remington Raider,” or public relations aide.
Some of the events Phil Sanborne wrote about while in the Marines were atomic bomb tests in the Nevada desert, including one he witnessed from a trench only 4,000 yards away.
Sanborne said that growing up, the family had an enlarged photo of one of the bombs exploding.
After serving in the Marines, her father returned to work for Newsday as a reporter, Sanborne said. He then served as an editor and also wrote editorials for then-Newsday publisher Bill Moyers.
Phil Sanborne retired from Newsday in 1992 as a copy editor after working there for more than 40 years, his daughter said.
“He loved the newspaper and the countless friends he made there, who enjoyed the numerous parties for which Phil and [his wife] Billie were famous,” she said.
Sanborne said her father had a genuine passion for writing.
“If he was alive today, he would probably be blogging,” she said. “He would write these first-hand pieces. He wrote stories just about anything.”
Sanborne said there could be some “genetic component” to her father’s writing ability, as she is a “strong writer,” her brother worked as a copywriter and her son has been blogging and has had some pieces published.
She said her father received Hofstra’s George M. Estabrook Distinguished Service Award in the late 1970s for his work at Newsday.
Phil Sanborne and his wife, Billie, met when they were students at Hofstra. They were married for 65 years before his death, Sanborne said.
She said the couple often traveled throughout Europe after their four children graduated from college, as her father had an interest in learning about other cultures, which stemmed from having a French mother.
“There was this sense of being connected to a wider world and being interested in international issues and seeing ourselves as global citizens more than just Americans,” Sanborne said.
She said her father was an “athletic inspiration” as he took up long-distance running in middle age. He completed three marathons, numerous 10Ks and triathalons while “proudly sporting a Newsday T-shirt.”
Although Phil Sanborne retired from Newsday in 1992, he continued to stay involved with writing by submitting letters to the editor of his local paper, the Northport Observer, on Long Island, about local issues in the community in which he lived much of his life.
He is survived by his wife, four children, Sheryl, Lynn, Mark and Jonathan Sanborne, grandchildren Austin and Preston Kendall, Christina O’Hara, David and Eliza Jimenez, and great-grandchildren Michael, Ela and Owen Jimenez.
Phil Sanborne was predeceased by his son-in-law, Michael Jimenez, and his siblings Francine Taylor and Raymond Sanborne.
Sanborne said the family is requesting that donations be made in his name to PBS, as he loved all of the station’s programming.
Donations can be made at www.pbs.org/foundation/ways-to-give/.

Michael Cascio goes from Bushwick to bookshelves
Next Article