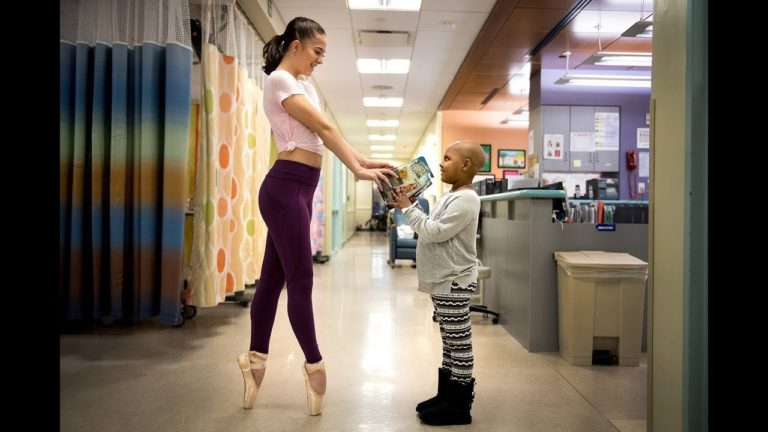 Consiglio, now 15, was diagnosed with stage three germ cell cancer in December of 2015.

She didn’t let the disease stop her from doing what she loves — dance.

“I was dancing throughout my treatment every single day, I even told the nurses I had to get out earlier at a certain time so I could get to class, I wasn’t hearing no for an answer, I had to go,” Consiglio, of Glendale Queens, said in a recent Youtube video. “And the doctors still say today that dance saved my life.”

Consiglio was treated at Cohen Children’s Medical Center, where she recently returned to spread joy in a “10 Minute Photo Challenge” video with dance photographer Jordan Matter.

The video has been viewed more than 1.6 million times since it was posted on Feb. 22.

He’s work with many aspiring, young dancers, but said Consiglio is “perhaps the most inspiring dancer I ever met.”

Matter and Consiglio went throughout the Cohen center in an effort to spread joy with the traveling photoshoot.

At one point, Consiglio gives a young patient a toy.

Another shot features patients tossing paint all over Consiglio as she poses.

“It was one of the most emotional and rewarding photo shoots of my career, and an experience I will never forget,” Matter said in a release.

The role dance played in Consiglio’s recovery is a great example of a holistic approach to treating a disease, Dr. Charles Schleien, executive director at Cohen Children’s Medical Center said in a release.

“Our doctors saw the importance of dance as one piece of the puzzle to Stephanie’s cure,” Schleien said. “Through that and all the anti-cancer therapies she received, she is now cancer free and her road to survivorship looks clear. It’s a wonderful inter-disciplinary approach to illness!”