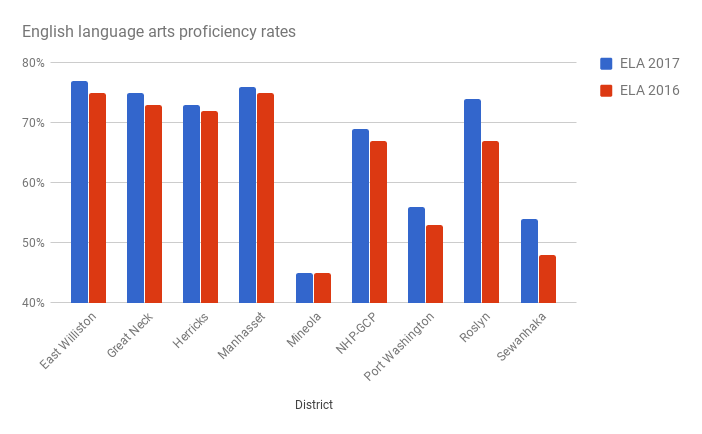 An average of 60.5 percent of third- through eighth-graders in the nine school districts within Blank Slate Media’s coverage area got “proficient” scores on this spring’s English language arts exam, up 2 percentage points from 2016, the state Education Department data shows.

But the average math passing rate rose only a third of a percentage point to 64.8 percent. No local school districts saw their English passing rates fall, while four districts’ math pass rates declined.

“The news is generally positive and shows steady progress in many areas,” the state education commissioner, MaryEllen Elia, said in a video statement.

Unlike last year, this year’s test data is directly comparable to the prior year’s because there were no major changes to the tests themselves, the Education Department said.

Every North Shore district beat the state average passing rate on both the English and math tests, except in one case. The Sewanhaka Central High School District had 38 percent of its seventh- and eighth-graders who took the tests pass, about 2 percentage points below the state average.

Only the Mineola school district saw its English pass rate stay flat while the other eight districts’ rose. But math passing rates decreased or did not change in six districts: Mineola, Sewanhaka, Port Washington, Manhasset, Great Neck and East Williston.

An average of 25.6 percent of North Shore students opted out of the English tests this year as part of a movement protesting the tests’ alignment to federal Common Core standards, up slightly from last year, state data shows. The average math opt-out rate fell to 22.8 percent.

Test refusals statewide fell this year to 19 percent from 21 percent in 2016, the Education Department said.

Though the test scores show growth, state and local officials are still working to increase achievement and narrow gaps between groups of students statewide, Elia said.

The state’s plan to do so, required by the federal Every Student Succeeds Act, will measure school quality using more metrics than just test scores, Elia said.

“These tests are important because they give us valuable information about how our students, schools and districts are performing and where the gaps in student achievement persist,” Elia said in her statement. “But tests are only one piece of the puzzle.”

“We are always pleased when our students show progress on any measure of achievement, but we don’t place too much importance on any one indicator,” Brown said in a statement.

Officials for the other eight school districts in Blank Slate Media’s coverage area did not comment on the test results or did not respond to requests for comment.