“February Funny Fest Fundraiser features the funniest folks frolicking under the footlights,” says comedian and producer of Feb Funny Fest, Paul Anthony. “This event has become a great way for Long Island to beat the winter blues and have a great night out. Each year we work hard to bring out a completely new line-up of hilarious comedians from all over the country. This year is no different! We have an incredible show planned. We really wanted this year’s line-up to feature all national headliners as part of the theater’s 50th Anniversary celebration.”

The fundraiser also features a pre-show wine tasting in the downstairs bar, featuring wine and appetizers, hosted by Theatre Three’s Board of Directors.  This aspect of the fundraiser has quickly become a favorite of attendees over the past few years. 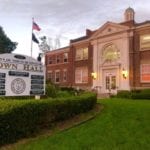