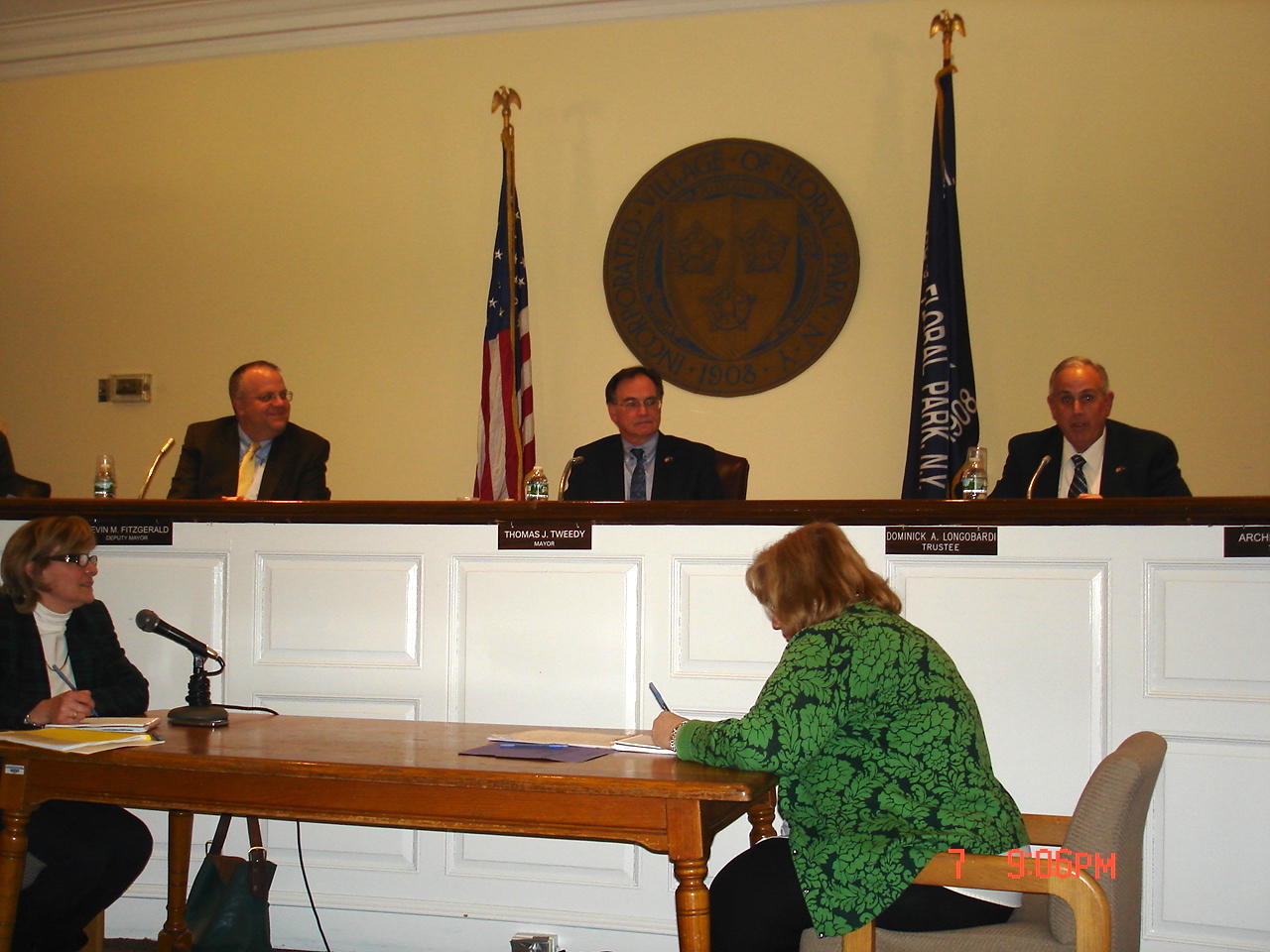 The Village of Floral Park Board of Trustees is seen on March 7, 2017. (Photo by Grace McQuade)

Floral Park village officials on Tuesday stood by the independent study they commissioned of the Long Island Rail Road’s third track project and again called for the railroad to restart its environmental review process.

The village Board of Trustees concurs with the findings of a report released last month by Beveridge & Diamond, a Manhattan environmental law firm, and the Vertex Companies, a Boston-based construction engineering firm, which found the LIRR’s environmental impact statement for the $2 billion project lacked specific information that the state environmental review law requires that it contain.

The LIRR and Metropolitan Transportation Authority still have failed to show that “the benefits outweigh the problems” posed by the plan to build a third track along the railroad’s Main Line between Floral Park and Hicksville, village Mayor Thomas Tweedy said, reiterating one of the village study’s conclusions.

“While we believe that we have clearly delineated our position and have distributed the experts’ response and reports, confusion and lack of clarity remain,” Tweedy said at Tuesday’s Board of Trustees meeting.

Floral Park, along with the villages of New Hyde Park and Garden City and the Town of Hempstead, retained Vertex and Beveridge & Diamond to review the voluminous draft environmental impact statement, or DEIS, for the project that the LIRR released in November.

In a Feb. 14 letter to project planners, Beveridge & Diamond attorney Michael Murphy called the study “largely superficial” and called for a new review that contains more specific information that he said the review omitted.

But project officials rejected his claims, saying the study goes well beyond the state law’s requirements in terms of detail and specificity.

Floral Park officials and residents have been opposed to the third track project since Gov. Andrew Cuomo announced it in January 2016.

The LIRR’s environmental impact statement concluded that the project would have a minimal impact on the surrounding communities when completed, as it includes various components that aim to mitigate harmful impacts.

But Floral Park continues its opposition to the project based upon “intelligent and thoughtful input” from residents and the technical experts the village retained, Tweedy said, standing by the experts’ claim that the LIRR should issue a new study with more specific mitigation measures.

“Our concerns are real, and I think the questions that are being presented on the DEIS need to be respected and responded to by the MTA and LIRR before we move forward,” Tweedy said.

When the LIRR tracks were elevated in Floral Park, which Tweedy called “the gateway to Long Island,” in the 1960s, the movement of four street-level railroad crossings and four tracks that went through the village greatly disrupted the community, Tweedy said.

Residents have stated similar concerns about the third track project disrupting traffic and quality of life.

Cuomo has promised to make this version of the third track project much less invasive than the MTA’s 2005 proposal. The project would require no residential property takings, eliminate the seven street-level crossings along the 9.8-mile corridor, build sound barriers along the tracks and add upgrades at several stations.

Planners have touted an “unprecedented” public outreach effort that has allowed residents, local officials, civic leaders and other stakeholders to give direct input and help shape the plans.

“This project is a long overdue and rare opportunity to realize so many improvements to the LIRR and local communities,” Shams Tarek, a project spokesman, said in a statement last month responding to the villages’ report. “It’s not surprising that a report commissioned by a mayor who’s been a longtime opponent of this project would draw certain conclusions.

That said, we welcome all public comments and this project will continue to be a reflection of that input, as it has from day one.”

Project supporters say a third track is needed to make the railroad system more reliable and provide better service as it expands.

About 40 percent of the LIRR’s daily ridership travels along the Main Line corridor, project documents say.

A third track would give trains a way around accidents, preventing delays from rippling throughout the system, officials have said.

Polar plungers raise over 51K for Special Olympics
Next Article