A Floral Park man was arrested Thursday for allegedly stealing more than $54,000 in Medicaid benefits, according to Nassau County District Attorney Madeline Singas.

The man, Feroz Nazirbage, 46, was arraigned before Judge Maxine Broderick the same day. He was charged with welfare fraud in the second degree, grand larceny in the second degree, two counts of offering a false instrument for filing in the first degree, and violating social services law, according to a news release from the district attorney’s office.

Conviction on the top count would result in a maximum of five to 15 years in prison.

Singas said Nazirbage is accused of using the Medicaid system to get free coverage for his family for over three years. She said that between January 2012 and September 2015, Narzirbage, his wife, and their two children got Medicaid benefits from the Nassau County Department of Social Services.

Nazirbage allegedly filed documentation and recertification forms to the county that indicated that he was either unemployed, making no more than $2,800 per month or both. Income of no more than $2,800 would have met the qualifications for Medicaid benefits.

During these years, however, Nazirbage owned and ran a pharmacy in the Bronx, according to the district attorney’s office.

The combined yearly income of him and his wife ranged from $163,241 to $690,224, according to the news release. These amounts would make Nazirbage ineligible for benefits.

He allegedly received $54,006 in Medicaid benefits, which covered his family for over three years.

Nazirbage’s attorney, David Strorobin, said that Nazirbage pleaded not guilty and that this “isn’t a case of him going in and stealing money.” He said that he is accused of using Medicaid when he wasn’t supposed to and that the case is still in the early stages.

Nazirbage was released on his own recognizance. He is due in court on April 29. 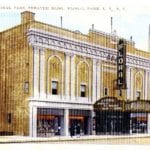 Eight historic markers to be unveiled at anniversary event
Next Article