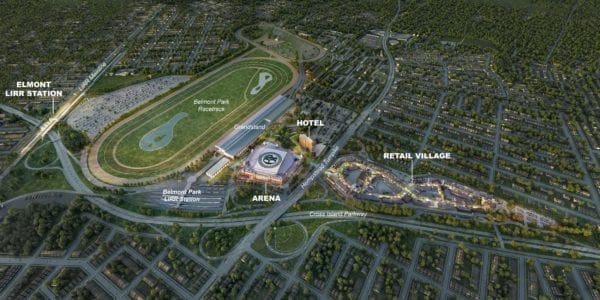 The Village of Floral Park remains in an ongoing lawsuit with New York Arena Partners, Empire State Development, and Franchise Oversight Board in regards to development at Belmont. (Photo courtesy of the New York Islanders Hockey Club)

Kevin Fitzgerald, deputy mayor of Floral Park, said the village had obtained documents showing that state officials had no intention of taking local concerns into account in the Belmont Park development project.

According to the documents that were acquired by the village under the Freedom of Information Law, a “master plan” for the Belmont Arena project was discussed by developers two years before the state issued a request for the redevelopment of the property, he said.

The village has a history of opposition to the project, which includes a 19,000-seat arena for the New York Islanders, 350,000 square feet of shops and restaurants, a hotel containing 250 rooms and parking on 43 acres of vacant state-owned property at Belmont Park.

Floral Park filed a lawsuit in September asking a judge to overturn all approvals, stop construction on the site and restart the environmental review process.

In documents filed in the lawsuit, the village called the public bidding process “flawed” and the environmental review “inadequate” and said the project did not mitigate negative impacts on the village.

In the statement, Fitzgerald said the village and its counsel Beveridge & Diamond requested documents from the ESD in October 2018 and August 2019, and the response was delayed.

The emails received by the village show contact among the former head of the New York Racing Association, or NYRA, ESD officials and Gov. Andrew Cuomo’s office in 2016. The emails show communication involving details of a “master plan” for the project.

While the “master plan” contained most of the same elements that the approved proposal featured, such as a retail sector, arena, park and hotel, Jack Sterne, a spokesman for Empire State Development, said that any realistic proposal would share similarities.

One of the main differences in ESD’s approved site is that the acre size is 43 acres, rather than the NYRA proposal at 65.

In his statement, Fitzgerald said: “It is also telling that, immediately after these documents were released, ESD attempted to retract the release of these documents, despite the lack of any legal basis to withhold these documents from public disclosure. In our view, the documents belatedly turned over by ESD further support the Village’s contention that the entire process – from well before the commencement of the Request for Proposal (RFP) process and continuing through the environmental review process conducted by ESD – was merely a show to hide a predetermined outcome.”

Sterne said ESD abandoned its first request for proposals in December 2016 and subsequently issued a second one a year later in July. Sterne also said that ESD has followed “an independent, competitive process” and that the arena proposal was chosen because it scored the highest of the three responses.

The criteria that the responses were scored on diversity practices, community benefit, project design and timing, and the extent to which the project strengthens Belmont as a “destination.”

“This is nothing more than a Hail Mary attempt by the Village of Floral Park to kill a project that is creating thousands of jobs and generating billions of dollars in economic activity,” Sterne said in an email. “The winning proposal was selected because it scored the highest on the clear, straightforward criteria outlined in our process. This other document from NYRA is old news and immaterial.”

In the statement, Fitzgerald asked several questions focused on the transparency, or lack of it in his view, that the ESD provided the village and its residents throughout the planning stages and with an environmental, or SEQRA, review.

Based on a public letter NYRA provided to ESD, SEQRA reviews include the impacts from NYRA conducting night racing, if and when it is legalized in New York, as well as the other NYRA operations at the Belmont and facility.

Fitzgerald closed his statement by saying the village and its residents were not against development at Belmont, despite the ongoing lawsuit with developers, but rather the way the development agency handled the community’s input.

“All we asked for (and quite frankly have a legal right to) was to have meaningful input in the process from the beginning,” Fitzgerald said. “It is now even clearer based on the aforementioned partial discovery that it appears that it never was the intent of the ESD as lead agency to have meaningful conversations and take those concerns from those meetings into serious consideration.” 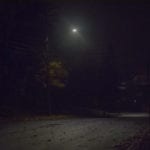