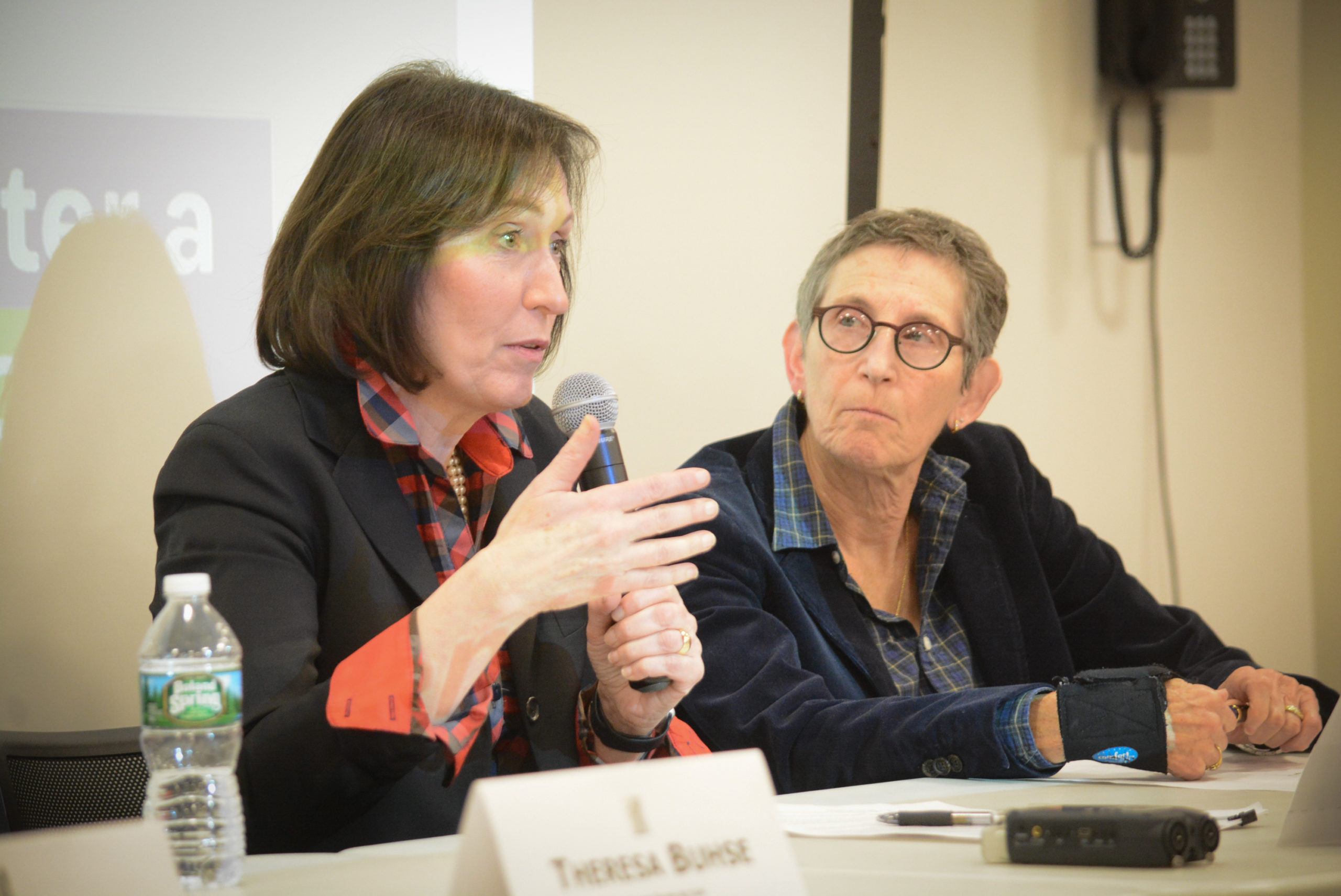 Jacqueline Harounian, the forum’s moderator, said the event aimed to provide information and resources for those dealing with “significant mental health challenges” and to reduce the “shame, stigma, prejudice and discrimination” associated with them.

“Our goal is nothing short of bringing light into darkness,” Harounian said.

Experts on the panel underscored the importance of connection, communication and listening in helping save a life, as well as recognizing warning signs like sudden changes in behavior.

Madelyn Gould, a psychiatry professor at Columbia University whose research specializes in suicide prevention, said that most suicidal people are ambivalent and give warning signs, and that asking if they want to kill themselves will not put the idea in their head.

“When people are saying they are suicidal, very, very often what they are saying is they are in such intense pain, emotional pain, they want relief from that pain and they don’t know how to get that relief – they want a way out,” Gould said.

Gould said that with suicide, there are often underlying vulnerabilities –  biological, social, substance abuse, mood disorders, sexual orientation – combined with a “stress event,” ranging from school and legal trouble to a break-up. This then leads to an acute mood change, she said.

“Most people, even through this cascading sort of horror, won’t die by suicide unless there’s a lethal method available,” Gould said, also adding that action can be taken to save a life.

Theresa Buhse, the associate director of the Long Island Crisis Center, also said there are warning signs. These can include talking about suicide, a preoccupation with death, a dramatic change in sleeping or eating habits, isolating themselves or giving away prized possessions.

“Your gut instinct is the most important thing,” she said.

If these signs are spotted, Buhse said, a person should ask directly if someone is thinking of killing themselves and potentially preface it with the reasons why. If he or she says yes, “you need to listen.”

And even if he or she says no, Buhse said, “It sends a message you are a person they can go to.”

She also emphasized the importance of not offering a quick fix, but instead taking every threat seriously. Among things that someone can do, she said, are provide a hotline number and offer to go with the person to get help.

“Do whatever you can within reason, because sometimes it is hard for them to take that next step,” Buhse said.

One option is the Long Island Crisis Center, which offers a 24/7 confidential crisis and suicide hotline, a suicide outreach team that can reach out to someone who appears at risk, and counselors with hundreds of hours of training. The crisis hotline is 516-679-1111.

And if a friend tells you he or she is feeling suicidal but not to tell anyone – Buhse said to tell someone, because if the person does act, “you will never have the chance to get that friend back.”

“You always have the chance to repair that friendship,” she said, but added “it is not your fault if someone chooses to end their life.”

Ellen Ritz, the president of the Queens/Nassau chapter of the National Alliance on Mental Illness, said the organization offers a variety of programs like a three-month education course for families on how to handle mental illness and peer-to-peer support groups.

When people are suicidal, she said there is a feeling of being helpless, hopeless and alone – and emphasized that it is not a character flaw, but something that can be treated.

“That change of connection, not feeling alone and not feeling so different in some ways, changes lives,” Ritz said. “There is hope and there is help.”

Ritz also said it is important to trust the gut and ask if they are thinking of suicide.

Shiphra Bakhshi, a clinical psychologist from Great Neck, said that when people get therapy, “everything is confidential.” The only limit to that, she said, is if someone is considered a serious risk to themselves or somebody else.

Medication “can be very, very helpful” for moderate to severe depression when paired with therapy, Bakhshi also said.

“Black and white thinking” and hopelessness are important to look out for, she said. She also said that bullying and cyberbullying can sometimes seem to be permanent – and that it “should be spoken about.”

The panelists also referred to other available resources.

Panelists also noted the safeTALK training program, a course for people 15 and older to help them spot warning signs and connect them with intervention resources, and a mental health first aid training program.

For LGBTQ youth, the Trevor Project offers trained counselors for anyone feeling suicidal or in need of a “safe and judgment-free place to talk” at 1-866-488-7386. A specialist can also be reached by texting START to 678678.

As a general point, Harounian wrote in her planned remarks, having a “support network” is critical.

“Having a support system is one of the most important aspects of healing from a crisis or challenge,” Harounian said. “Lean on those who support you, be open to receiving help, offer help to others who are experiencing something similar, connect with your community.”